As Threats Escalate, Snow Leopards Could Lose Endangered Status (And Why That Matters) 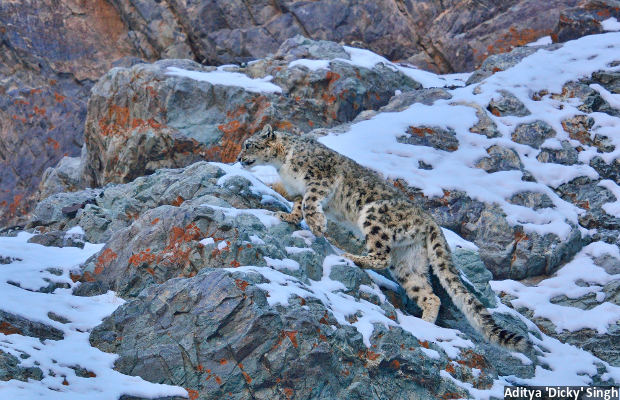 Snow leopard (Panthera uncia) walking on rocky slopes in Hemis national park, Ladakh, India" (photograph taken in February 2014) . The photographer says, "What I do know is that this one is an older mother, who was heading to a cave where the cubs were. We could hear them calling."

Bishkek, Kyrgyzstan: The snow leopard or Panthera uncia might soon be downlisted from ‘endangered’ to ‘vulnerable’ in the Red List of the International Union for Conservation of Nature (IUCN), signifying it is under less threat than before, even though the big cat has vanished from 50% of the habitat, in parts of its range, putting it at further risk than ever before.

Snow leopards are keystone species and indicators of the health of its high altitude habitat--the Central Asian mountains, from which flow rivers which provide drinking water and irrigation to billions of people downstream.

The Red List, put together by the IUCN, an organisation with both government and civil society organisations as members, works as a ‘barometer’ for the status of a species, and is the most comprehensive and globally accepted source of information on the extinction risk of species.

The list places animals and plants in categories ranging from ‘least concern’--for those species that are under the least threat of extinction--to 'critically endangered’ for those that are near extinction, unless steps are taken immediately to conserve the species.

While those supporting the move to downlist--which refers to re-categorising an animal to a lower threat level--assert that a shift to the ‘vulnerable’ category will be seen as a success and reinforce the message that conservation works, it is widely felt that such a celebration is premature, guided by poor science, and will send a signal that there is no longer a compelling case for its conservation.

“Countries have not been consulted and the process is unscientific,” Siddhanta Das, Director General of Forests at India’s Ministry of Environment, Forests & Climate Change, told IndiaSpend, on the move to downgrade the snow leopard’s protection status.

The import of any such decision is far-reaching and must be guided by sound science and a precautionary approach. We are in the Sixth Extinction (scientific jargon for the next mass extinction of wildlife in the world) and wildlife is not to be trifled with, Syed Mahmood Nasir, Inspector General of Forests at the Ministry of Climate Change in Pakistan, told IndiaSpend.

Any change in the category of a species carefully considers population size and trends, its area of occupancy and assesses various categories of threats based on rigorous scientific knowledge.

The downlisting of the snow leopard--an animal so elusive it is called the grey ghost of the mountains--is expected in early September 2017, and is guided by recent research which indicates an increase in numbers, according to a senior researcher.

New estimates put the total snow leopard population between 4,700 and 8,700 in less than half their total range (44%), according to this July 2017 paper in the conservation journal Oryx, authored by Rodney Jackson and David Mallon, almost double of the 2013 estimate of 3,900 to 6,390, across its entire range.

“The status of the snow leopard may be slightly less dire than hitherto believed,” they wrote. A species is classified as ‘endangered’ if there are fewer than 2,500 mature (or breeding) adults and the decline in their population exceeds 20% over 17 years, explained Jackson, and added that the snow leopard does not meet the criteria.

Many within the scientific and conservation community said the claim of increased numbers was “uncertain and untenable”. All snow leopard population estimates are, at best, educated guesses, and the increase in numbers is based on poor science, they explained.

Estimates of Global Snow Leopard Population Over The Years

NOTE: These figures are sourced from ‘Snow Leopards: Biodiversity of the World: Conservation from Genes to Landscapes’ by Thomas McCarthy, David Mallon. The population ranges are wide, and global estimates of snow leopard population are largely guesstimates, not based on reliable science due to their elusive nature, mountainous habitat, and the large range size.

The snow leopard is a cryptic, reclusive wide-ranging species inhabiting impossible terrains and is near impossible to count, researchers told IndiaSpend.

“Less than 2% of the global snow leopard range has ever been sampled for estimating their population, as per the snow leopard survival strategy, brought out in 2014,” said Koustubh Sharma, a senior ecologist at the Snow Leopard Trust, a Seattle-based nonprofit working across six snow leopard countries, including India.

With only a fraction of its habitat studied, mainly its finest habitats, snow leopard numbers are likely to be an overestimation, researchers said.

Rigorous sampling protocols are critical for assessing populations for the Red List status. “There is a well established process that has a scientific basis,” explained Boris Erg of the IUCN. Like tigers, the accepted technique for estimating snow leopard populations is by the use of camera traps and scat-based genetic surveys.

Yet, Mallone and Jackson’s 2017 study used signs such as pugmarks, scat, scraps, expert opinion and interviews--unreliable methods that do not meet scientific rigour--in 63 of the 69 areas they cite to show an increase in snow leopard numbers, researchers said.

Neither has the threat to the species declined. Between 221 and 450 snow leopards have been killed--either poached for their skins or killed in retaliation for hunting livestock--annually since 2008 across their range, estimated a 2016 report by TRAFFIC, a wildlife trade monitoring network. In India, an estimated 21-45 snow leopards were killed annually, the report estimated.

Climate change is another key threat to the mountainous ecosystems where this big cat thrives.

In India, snow leopards are given the same protection as the tiger, listed under Schedule I of the Wildlife (Protection) Act, 1972--the highest protection afforded to a species.

Snow leopards typically occupy lofty mountain ranges above the tree line. In India, their habitat is spread across 100,000 sq km, 3,000-5,400 meters above sea level. These once-remote habitats are rapidly being opened up for ecologically damaging infrastructure such as roads, mining and dams. 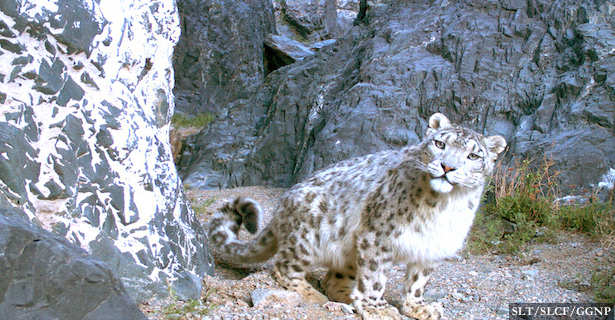 In most range countries, snow leopard occupy the remote mountainous border areas between increasingly hostile neighbors. With countries looking to fortify their borders, there is a greater emphasis on building defence infrastructure, mainly roads, for greater access along borders. China’s vast network of roads, railways, air bases and big hydel power projects along the border in India’s northeast has pushed India to undertake more infrastructure projects along its borders.

One way of fast-tracking such projects in environmentally fragile areas in India has been by easing the environmental clearance process. In 2015, India’s environment ministry approved of a standard policy for all road and other infra projects within 100 km of the Line of Actual Control--the border between Indian-held lands and Chinese-controlled territory. This policy allows states to clear defence projects and do away with a case-by-case forest and environment clearance, instead providing ‘blanket’ clearance.

This is expected to expand 6,000 km of road stretches along India’s borders, promoting access and development in these areas, spanning the Himalayan, and snow leopard states of Jammu and Kashmir, Uttarakhand, Himachal Pradesh, Sikkim, and Arunachal Pradesh.

Such threats exist across the snow leopard’s range.

In Mongolia, 92 mining permits once covered nearly all of the South Gobi’s Tost Mountains, prime snow leopard habitat, according to this report from the Snow Leopard Trust, until the government declared it a ‘protected area’. However, reports from the region indicate that mining continues to be a key threat in this region especially in regions bordering with China. The Southern Himalayas, also home to the snow leopard, particularly in China, are seeing unprecedented hydropower construction.

Downlisting based on scientifically deficient data could place the already endangered species at further risk, exposing them to intensified threats.

Governments, non-governmental organisations and other stakeholders take their cues from the Red List regarding extinction risk of a species. Its category can therefore have tremendous import on the survival of a species as it influences conservation action, the level of protection accorded to the animal, or exploitation and diversion of its habitat.

In India, for instance, a species no longer being ‘endangered’ potentially weakens the importance given to its conservation, and could adversely impact the already languishing ‘Project Snow Leopard’, an innovative conservation project launched in early 2009.

It may further make diverting its habitat easier for competing uses at a time when environmental concerns are being disregarded in the growth process. This is especially worrying with the Indian Himalayas moving toward the highest dam density in the world, potentially accelerating the extinction of the snow leopard.

(Bindra is a wildlife conservationist and the author of The Vanishing: India’s Wildlife Crisis.)