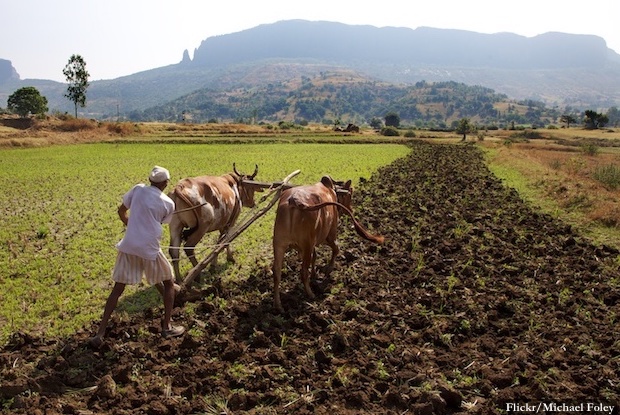 Every one-degree-celsius rise in temperature beyond 20°C (degrees Celsius) during the growing season on India’s farms causes 67 suicides, with 59,300 suicides since 1980 attributable to climate change, according to a new study by Tamma Carleton, a doctoral student in agricultural and resource economics at the University of California-Berkeley, USA.

Crop losses and damages from excessive heat led to a fall of 0.5% in annual yield--for every growing-season day that the temperature moved from 18°C to over 30°C, said the study, published in July 2017 in Proceedings of the National Academy of Sciences, a global journal.

The finding that these losses pushed farmers to suicides in the thousands has urgent, widespread implications for policy makers in India, particularly because Carleton--who used a data set of reported suicides from India’s National Crime Records Bureau, information on agricultural crop yields and high-resolution climate data--found little evidence that Indian farmers have adapted at all to climate warming.

“Adaptation is an incredibly pressing priority now that climate change has begun to unfold,” Carleton, 29, told IndiaSpend in an email interview. By 2050, India’s average temperature is projected to rise 3°C, causing an impact that is more severe than anything the country has thus far experienced.

Without adaptation, India’s “suicide epidemic”, as Carleton put it, “the heartbreaking loss of life that signals the incredible challenges faced by those feeding our global population” will continue.

Since she is from an American farm family and grew up in a rural community where food was mostly sourced from her family’s farm or a neighbour’s, Carleton said her study reflects subjects close to her heart, including the global food system, food security, environmental change and adaptation. 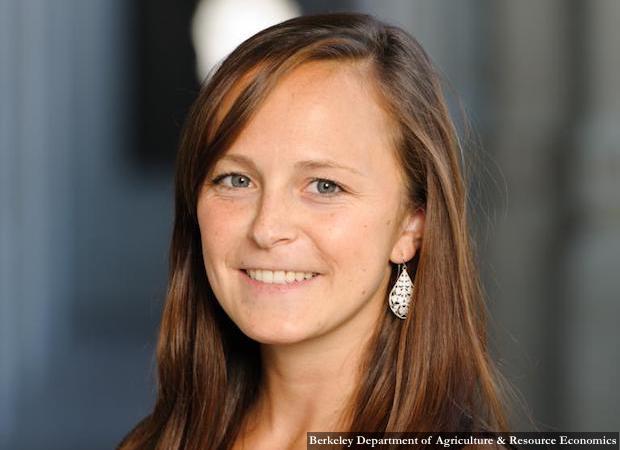 Tamma Carleton, a doctoral student in agricultural and resource economics at the University of California-Berkeley, USA.

Carleton holds masters degrees in environmental change and management and economics for development from the UK’s University of Oxford, where she was awarded the George Webb Medley prize for her work in development economics. She has worked as an economic-research analyst for the US Federal Trade Commission's Bureau of Economics.

When she is not researching or teaching students, Carleton enjoys running, listening to podcasts, being outdoors and sharing home-cooked meals with friends and family.

I see this 6.8% value as a significant number for two reasons. First, climate change has just begun to unfold, and the warming experienced since 1980 is far less than what is projected to occur in the coming decades. Therefore, the number of deaths attributable to warming is likely to rise in the future. Second, because the population of India is so large and the suicide rate relatively high, contributing 6.8% to the total upward trend means that climate change has claimed many thousands of lives. Each life claimed by suicide is devastating, and the fact that over 59,000 are attributable to warming places exceptional urgency on climate mitigation and adaptation policy.

You found that a temperature increase of 1°C beyond the temperature of 20°C caused 67 suicides every day, and you found that a growing-season rainfall increase of as little as 1 cm each year was associated with an average 7% drop in the suicide rate. What does this say about the association between the two key climatic determinants, temperature and rainfall, and agricultural yields and suicides?

To quote from your summary: “I find no evidence that acclimatization, rising incomes, or other unobserved drivers of adaptation are occurring.” On what basis did you conclude that Indian farmers have not changed their practices to accommodate rising temperatures? What practices and other interventions could help farming families adapt to a warmer climate?

Farm-based solutions to protect yields and farming incomes against warming temperatures could include farmers switching to heat-resistant crop varieties, or investing in irrigation technologies to combat rainfall variability. Economic interventions that make incomes less susceptible to climatic fluctuations include taking out crop insurance and creating accessible, well-functioning rural credit markets where farmers can avail low-interest loans for agricultural inputs instead of incurring debt burdens that become insurmountable. All these interventions have the potential to help climatic warming translate into fewer suicides. However, because I do not have sufficient data to examine these individual strategies, and because the possible successes of these strategies are not well known, I did not directly test whether households are making these particular choices in response to a changing climate. Instead, I assessed how the relationship between temperature and suicide varies across different populations within India and at different points in time, to see if evidence exists that adaptive measures are reducing the impact of temperature on suicide for some households. I found no such evidence. States with different average incomes showed the same relationship between temperature and suicide. Over the 47 years of data I analysed, India has gradually warmed while also experiencing robust economic growth. Despite this, the relationship between temperature and suicide is virtually identical in recent years to what it was at the beginning of this time period. This finding suggests that rising incomes, gradually warming climate, and a diversifying economy in India have not translated into smaller impacts of temperature on suicide.

Much of the data I used from the National Crime Records Bureau did not differentiate between farmers and other occupations. Only in recent years are the occupation, gender and other demographics recorded. Therefore, my analysis generates an estimate of the effect of temperature on suicide that is an average across the entire population, irrespective of occupation. Therefore, if in fact farmers and agricultural workers are more affected by the climate than those in other occupations, my estimates would be a lower bound on the true effect that is applicable to these vulnerable populations.

Your study conclusively proves that the increase in suicides on warmer days cannot be attributed to the neurological effects of heat exposure on aggressive behaviour. You proved this by including lagged climate variables in your model, which means that past high growing season temperatures strongly increase suicide rates, with effects that last for five years, and high growing season precipitation lowers suicide rates in the ensuing two to three years. Can you explain this effect?

I found a significant cumulative positive effect of temperature on suicides, and a significant negative cumulative effect of extra rainfall. High temperature during this year’s growing season causes higher suicide rates up to five years into the future, while heavy rainfall today causes suicide rates to fall two to three years into the future. The method used to calculate these lagged effects suggests that one year of relatively high rainfall lowers the suicide rate two years later by approximately 4%. This delayed effect would not materialise if climate variables were influencing suicide prevalence purely through direct biophysical channels. What this suggests is a beneficial yield from good rainfall or optimal temperatures may enable individuals to save crops and income, making future suicides less likely.

Why might it be that you did not find a strong association between extreme rainfall—drought or very heavy rainfall (causing flooding)—and the suicide rate?

This lack of statistical significance may be due to the fact that I aggregated climate data to the state level, as the National Crime Record Bureau records annual suicides at this spatial resolution. Characterising monsoon rainfall at the state level may cause imprecise measurements, as there can be important within-state differences in monsoon arrival and withdrawal. I concluded that rain during the growing season months negatively influences suicide rates, but with high uncertainty. In statistical models that estimate the impact of one variable on another (for example, the impact of rainfall on suicide), an average effect is estimated, as well as an uncertainty bound around that average. A large uncertainty bound implies that the true effect of one variable on another could be much larger or smaller than the estimate that was uncovered in the available data. In this context, the high uncertainty in rainfall effects implies that the true relationship between rainfall and suicide may be substantially different from the estimate I uncovered using the limited data available. The fact that I do not see a statistically significant effect of drought is likely linked to the uncertainty in my rainfall estimates in general and is something I am interested in pursuing in future research.