Mumbai: As India has become wealthier, more of its citizens are leaving its shores.

An estimated 17 million Indians were living abroad in 2017, making India the largest source country for international migrants globally, up from 7 million in 1990 and a 143% increase, according to an IndiaSpend analysis of data from the United Nations Department of Economic Affairs.

Over the same period, India’s per capita income increased by 522% (from $1,134 to $7,055), providing more people the means to travel abroad in search of employment opportunities they were not finding at home.

At the same time, the number of unskilled migrants leaving the country has been falling: An estimated 391,000 left India in 2017, almost half the number in 2011 (637,000), according to a new report by the Asian Development Bank (ADB).

However this does not necessarily mean that an increasing proportion of India’s emigrants are likely to be higher skilled or that policymakers should be worried about a rise in ‘brain drain’--the exodus of highly trained professionals from their native country.

The above figures refer to unskilled migrants travelling on Emigration Check Required (ECR) passports--passports issued by the Ministry of Overseas Indian Affairs to those leaving for employment in certain countries in the Middle East and Southeast Asia. Changes in the government criteria used to class workers as unskilled, leading to more migrants travelling on non-ECR passports, could be part of the reason for the declining trend.

“Over the years India has made internal adjustments to who gets an ECR passport. A lot of people are entitled to non-ECR passports and take that route to migrate instead--this is data which is not publicly available and therefore can not be analysed,” Seeta Sharma, Technical Officer (ILO) for EU-India Cooperation and Dialogue on Migration and Mobility, told IndiaSpend.

“It’s hard to say if more highly skilled people are leaving than in any other period and that ‘brain drain’ is increasing. Skills have increased across the board generally so the country may be losing higher skilled people compared to previous generations, but we’ve always had talent leaving the country to a large extent.”

Labour demand driven by constrained local employment markets is a key motivation for international migration, with 73% of all migrants globally entering the workforce in their host country, the ADB report found.

India’s working age population is currently growing by 1.3 million each month, exacerbating a stagnant job market that is further afflicted by a lack of employment. As many as 20.8 million people applied for 90,000 available jobs with the Indian Railways, the country’s largest public-sector employer, the Times of India reported in March 2018.

Searching for a better life

These figures reflect the response of Indian workers to rapidly expanding economies in the Gulf, buoyed by rising oil prices. As these oil-rich nations embarked on large-scale development projects, workers from India and other South Asian countries answered the call for the growing number of construction jobs needing to be filled.

However, recent global economic slowdowns have slowed migrant flows from India into the region. Declining crude oil prices and the resulting spending cuts on construction projects and the slowing economies explain the falling numbers of Indians opting to travel to the region, as jobs dry up and wages contract, explained the Ministry of External Affairs 2016-17 annual report.

Italy stands out as a non-English speaking OECD country with the largest increase of Indian residents since 1990, making it the largest diaspora population in continental Europe.

This is largely due to several migrant amnesties in the 1990s and 2000s, when thousands of undocumented Indians gained residency status; many later brought over families through marriage. Italy is also one of the rare European countries to offer seasonal work visas to Indian citizens, augmenting its appeal as a destination country amongst migrants.

While traditional host countries for Indian migrants, such as the Gulf States, USA and UK, remain the countries with the highest Indian populations, over the last decade, OECD countries have seen a significant increase in the number of Indians choosing to settle within their borders.

Netherlands, Norway and Sweden, for example, have seen their Indian populations grow by 66%, 56% and 42%, respectively, over seven years to 2017--a result of cheaper (compared to US and UK) and better education and work opportunities after graduation.

“The UK has really made it difficult to find a job there after studying, so a lot of Indian students have been looking elsewhere,” Sharma said. “For example, Germany has free education and there’s the potential to land a job in the country after university too, so you’re seeing a shift in migration.”

Rapidly aging populations across Europe and the West will further create a demand for migrant labour, as imported workers fill employment gaps left by falling birth rates in many developed countries.

India is well placed to benefit from this demand, with a relatively skilled (especially given the mature local IT market) and English-speaking workforce.

“Some developed countries in the West simply don’t have the demographics to support their labour market and will need to depend on the rest of the world,” Sharma said. “India can be ahead of the game here.”

Half of all countries globally now have fertility rates below 2.1, meaning too few children are being born to maintain their population size, according to this 2017 study published in The Lancet, a medical journal.

In the short term, however, changing political environments and increasingly hostile attitudes to foreign migration may have an impact on the acceptability of Indian migrant workers taking up these jobs.

The Trump administration has vowed to clamp down on the number of H-1B visas issued to foreign workers (India currently receives 80% of the total issued)--in a bid to “put American workers first” and ensure the temporary visas are only issued when there is a clear need for a non-US citizen to be employed, said a 2017 statement by the U.S. Citizenship and Immigration Services.

Meanwhile the UK’s decision to leave the EU in 2019 has resulted in a 1.4% decline in skilled migrants, with the intake from Asia dropping 4.9%, according to the ADB report.

The identity and socio-economic background of Indian emigrants is changing.

Southern states like Kerala and Tamil Nadu have been traditional sources of migrant workers to the Middle East and South-East Asia, departing on ECR passports. However, in recent years, northern Indian and less economically advanced states have overtaken their southern counterparts for the numbers of typically low-skilled male youth leaving for overseas work. 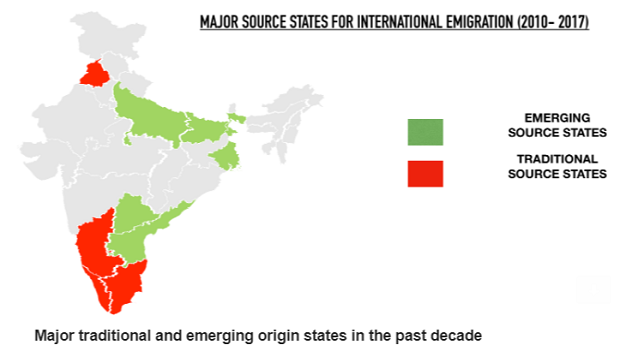 Unequal levels of development and vastly different labour markets across the country mean not all Indian job seekers are motivated to move abroad for low-skilled labour opportunities.

While certain states in India, mainly in the south, such as Goa, Kerala and Tamil Nadu, have education, health and economic indicators similar to developed countries, others mirror those found in low-developed countries, IndiaSpend reported in July 2018.

“Migration trends have shifted,” Sharma said. “For example if you’re from Kerala it may no longer be so lucrative to go to the Gulf. But for someone sitting in Bihar earning a third of what a Keralite earns, it still makes sense.” 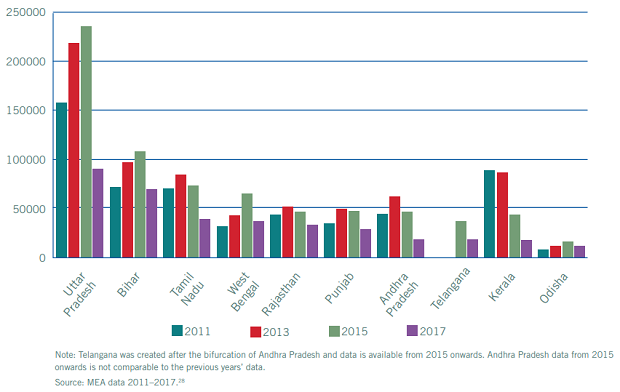 However, while these data show the numbers from each state leaving on ECR passports, they do not indicate how many have switched to non-ECR passports. Kerala may still be seeing large numbers of its population emigrate despite a decline in 2016 and 2017 in the ECR category, according to this 2018 report by the International Labour Organisation.

Indeed, Kerala received 19% of all remittances (funds sent by an expatriate to their country of origin) received in India in 2016-17, closely followed by Maharashtra (17%) and Karnataka (15%), with all three states comprising 51% of total remittances, according to RBI data.

Remittances are often vital income for workers’ families: 59% of remittances received in 2016-17 in India were used for maintenance (e.g. general consumption and living expenses), 20% were deposited in banks and 8% used to invest in property and shares.

India received the largest remittances in 2017 globally (the country has the largest number of international migrants, 7 million more than China), with close to $70 billion landing in the country’s banks accounts.

These migrants are largely the low-skilled populations of neighbouring countries such as Bangladesh and Nepal, who have a shared history with India, cultural and linguistic affinities and a porous border.

However, unlike protective measures implemented through ECR passports and efforts made by the Indian government to ensure its citizens avoid exploitation in the Gulf, there are concerns that similar policies addressing immigrant welfare in the country have not been fully addressed.

India has recently sought to crackdown on illegal immigration in the country, with the publication of a draft National Register of Citizens in Assam, a state that borders Bangladesh and has seen large influxes of refugees since the war for Independence in 1971. The move caught media attention for initially leaving out 13 million names, the majority Muslim, and drove families to fear they would be deported.