As India Ages, Indians Seeks Universal Pension From The Government 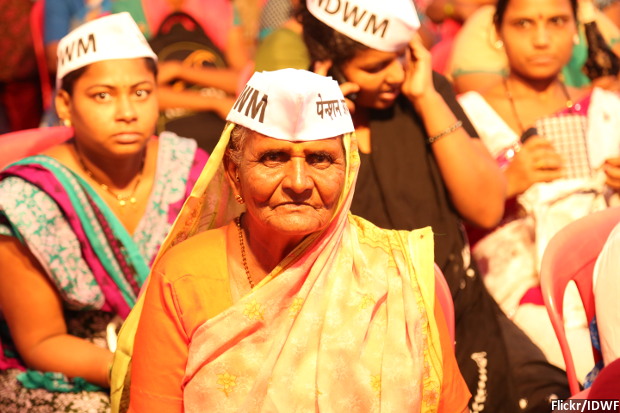 If pension continues to cover only 35% of senior citizens as it does today, 200 million, or 61.7% of India's elderly population, will be without any income security by 2050.

The Centre pays Rs 200 per month under the Indira Gandhi National Old Age Pension Scheme (IGNOAPS) to every Indian over the age of 60 and living under the poverty line (the ability to spend Rs 33 per day in urban and Rs 27 per day in rural areas as per the Tendulkar committee on poverty line). The states are encouraged to add to this sum and are free to expand the coverage. Currently, states pay anything between Rs 200 and Rs 2,000 as public pensions.

Should public pensions be universal or targeted? What should be the minimum offered by a public, non-contributory pension? From which age should it be granted? To find answers to these questions through opinions of older people, a study was conducted in Gujarat and Rajasthan by the Centre for Equity Studies (CES), New Delhi in August-November 2016.

The study, yet unpublished, collected opinions and experiences of 1,505 people above the age of 55 years across 14 locations in Gujarat and Rajasthan. The states were chosen because they represent two ends of the spectrum in the universalisation debate: Gujarat, India’s 10th richest state in per capita gross domestic product (GDP) ranking, offers a targeted pension of Rs 400 only to the poor at the time the study was conducted (since then the amount has been revised to Rs 500), and Rajasthan, 23rd in the per capita GDP list, extends Rs 500 to (nearly) all senior citizens.

The study found a wide and conclusive gap between pension policy and public opinion. Opinion across both states was unanimous that public pension should be extended to all elderly and should be initiated earlier than at age 60 years. The popular view was that Rs 2,000 was an adequate pension sum, which is four to six times higher than their present entitlement.

Gujarat pursues a narrowly targeted scheme whereby only the poorest senior citizens are entitled to public pensions. Rajasthan has near-universalised pension entitlements whereby women above the age of 55 years and men above the age of 58 years receive pensions as long as they are not entitled to pensions from any other source or are not taxpayers.

The results of the survey showed that public opinion is functioning independent of the policy on the issue of universalisation. Majority (83%) of respondents from Gujarat, a state which has experienced a targeted public pension scheme, were in agreement with those from Rajasthan (81%) who have experienced a near-universal pension scheme for about five years. The public opinion is unequivocally skewed in support of universalisation.

Older people living with families supported universalisation of pensions as much as those living alone. This is an important finding because till about 2007, the National Old Age Pension Scheme, as it was then called, considered destitution both a reason and a condition for being entitled to non-contributory, public pensions. In Gujarat, destitution continues to be used as a criteria--senior citizens who have sons above the age of 21 years are not considered eligible for public pensions.

Views On Universalisation of Pensions, By Family Structure/Support

Note: Respondents in Gujarat = 631; in Rajasthan = 765. ‘No Opinion’ set as missing. Decimals are rounded off.

Rs 2,000 is sufficient, four to six times over current entitlement

Pensions are an assurance of continuation of consumption levels required for dignified living in the face of reduction in income due to physiological atrophy and comparatively restricted income-generating opportunities. At the time of the study, the beneficiaries in Gujarat were entitled to Rs 400 per month and Rajasthan, Rs 500.

Beneficiaries above the age of 75 years were entitled to Rs 750 a month. These pensions did not allow elderly Indians working in the unorganised sector, who need public pensions the most, to retire, as IndiaSpend reported on April 20, 2017. These entitlements don’t support lowest official poverty line consumption levels of Rs 27 in rural and Rs 33 in urban per day as per the Tendulkar Committee.

How much did people think it took to ensure a dignified living? The average monthly ‘sufficient’ pension amount in Rajasthan was Rs 1,875 whereas in Gujarat it was Rs 2,494, the study found. The modal value--the most frequently occurring response--was Rs 1,000 in Rajasthan and Rs 2,000 in Gujarat. There was no significant difference between men and women on this count.

Views On What A Sufficient Monthly Pension Is, By Gender

Note: Respondents in Rajasthan = 751; Gujarat = 698. ‘No Opinion’ set as missing. Decimals are rounded off.

This amount is equivalent to half the minimum wage presently assured. The civil society group Pension Parishad has been making similar demands regarding amount of entitlement.

Bolivia, a country with a sizably smaller economy but comparable to India on other economic indicators, offers about $38 per month, a little over Rs 2,400, as part of its pension programme, Renta Dignidad. Most countries with decent pension programmes such as Bolivia’s ensure an entitlement amount equivalent to anywhere between 15 to 25% of per capita GDP.

Family/social support and the amount of pension desired by a beneficiary share a counter-intuitive relationship. Elderly respondents singly taking care of themselves consistently quoted a smaller amount than the ones being taken care of by family. This fits in with field observations--many older citizens expressed a desire to buy petty essentials such as notebooks or a fruit for a grandchild or to pay for the medical expenses of an ailing family member. They thought of their inability to pay for these small expenses as a personal failing.

Views On What A Sufficient Monthly Pension Is, By Family Structure/Support

Many factors such as average life expectancy, age structure of the society and physical atrophy should inform the age at which pensions are initiated. The IGNOAPS initiates pensions at the age of 60 like many industrially advanced nations. But the average life expectancy in India--68 years--is much lower than industrially advanced nations. We asked people during our research whether they thought pensions should be initiated at an age earlier or later than the one stipulated by the policy at present.

Majority of people felt that pensions should be initiated at an earlier age. A little over one-fourth of respondents in Rajasthan and about one-fifth of respondents in Gujarat said they were fine with the age at which pension entitlements were provided. As with earlier questions, gender does not make a significant impact on the opinions but a marginally higher number of women support earlier initiation of pensions across both the states.

Views On Age Of Initiation Of Pensions, By Gender

Note: Respondents in Rajasthan = 741; in Gujarat = 630. ‘No Opinion’ set as missing. Decimals are rounded off.

The divergence between policy and public opinion is observed across all three parameters--universalisation, adequacy as well as the age at which pensions are initiated. It is on the issue of universalisation and adequacy that there is a comparatively high degree of divergence from the policy as compared to age of initiation. We recognise that aligning completely with public opinion might not be possible for policy makers given practical constraints but this is an attempt to initiate a debate on age-based pensions in the public sphere by foregrounding public opinion and the voice of the elderly.

The study was conducted in partnership with Astha Sansthan, UNNATI and Mazdoor Kisan Shakti Sangathan in Rajasthan and with ANANDI and Mahila Housing Seva Trust in Gujarat. Sandeep Ghusale coordinated the survey in Maliya, Gujarat. A more detailed discussion on pensions for the elderly can be found in the ‘India Exclusion Report 2016’ released in May 2017 by CES and Yoda Press.

Correction:1. Graphs 2 & 5 erroneously referred to family structure of the respondents in an earlier version of the story. We have now corrected it to show the support system of the respondents. We regret the error.2. An earlier version of this story erroneously showed the estimated elderly population in 2050 as 32.4 million (instead of 324 million) and that without income security as 20 million (instead of 200 million). We regret the error.

(Sampat is a Delhi- based researcher and Dey is a researcher with Centre for Equity Studies, New Delhi.)