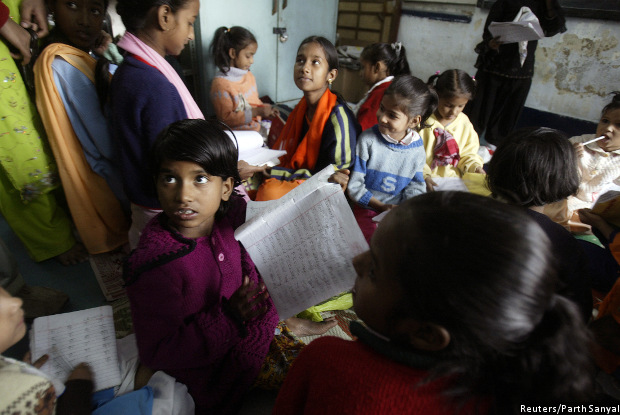 Destitute girls study in a school's anti-trafficking unit run by a Non-Governmental Organisation (NGO) in the eastern Indian city of Kolkata. Human-trafficking cases rose from 3,422 to 5,486 between 2010 and 2014, according to the National Crime Records Bureau.

Every day, 15 Indians are traded against their will to be, among other things, sexual slaves or forced labour, but a draft law to prevent India's growing tide of human trafficking--cases rose 60% over four years to 2014, the last year for which data are available--is being criticised for six reasons.

It is clear that existing laws under four acts are failing. From a decadal perspective, the trafficking of minor girls surged 14 times over the decade ending 2014: Girls and women comprised 76% of human-trafficking cases that year. Human trafficking in India for sexual slavery has grown in concert with economic growth, IndiaSpend reported in April 2016.

To address these failures and create a one-stop law to address diverse facets of human trafficking--sexual slavery, begging, forced labour and organ trafficking--a draft bill called Trafficking of Persons (Prevention, Protection and Rehabilitation) Bill, 2016, will be introduced in the next session of the Parliament by the Ministry of Women and Child Development, and it comes up short on these counts:

As many as 5,486 cases--or, as we said, 15 cases every day--of human trafficking were reported in 2014, according to this National Crime Records Bureau (NCRB) report.

Only 23% of human-trafficking cases led to convictions over the past five years. As many as 45,375 people were arrested and 10,134 persons were convicted, with punishments ranging from fines to imprisonment, IndiaSpend reported in August 2015.

Most of the victims (3,351) were registered under "immoral trafficking", a reference to sexual slavery, followed by "human trafficking" (2,605), including men and boys, forced to work at brick kilns and construction sites.

80% children rescued at risk of being trafficked again, criticism against new bill grows

Advocacies, such as Mumbai's Rescue Foundation and Kolkata's Sanjog, have formed a collective to express concerns about the bill, the main criticism against it centred on rehabilitation and prosecution.

Up to 80% children rescued remain at risk of being trafficked again, according to this 2015 Harvard University study. Most victims suffer from prolonged psychological disorders such as post-traumatic stress disorder (PSTD), depression and dysthymia (prolonged PTSD and depression).

More than 87% of victims tested positive for dysthymia after they were released from rehabilitation centres, said this 2010 study, Bring It All Back Home, by Sanjog.

“Most centres today have almost more than 100 girls and they provide for counsellors and not clinical psychologists who can help them deal with the trauma,”Roop Sen, co-founder of Sanjog India, told IndiaSpend.

The current system uses a "custodial approach", where the victim's opinion is not taken into consideration, said Sen. This needs to change to a "restorative approach" involving victims, particularly because 57% of girls rescued are adults, said the Sanjog study.

The primary reason for the low levels of conviction is the lack of funds and coordination between 232 anti-human-trafficking units (AHTUs) in different states, IndiaSpend reported in April 2016.

For instance, when investigation officers track traffickers across state boundaries, investigation and travel costs are reimbursed over a period of up to four years, a deterrent to many officers, said Sen.

The bill envisages a new agency to handle trafficking cases, but its jurisdiction and funding is unclear.