New Delhi/Mumbai: Heavy rainfall in Mumbai, with some parts receiving the second-highest rainfall in July in 45 years, has brought the financial capital to a halt.

At least 16 people died due to rain-related incidents. More than 50 flights have been diverted due to waterlogging. Local train services have been disrupted and schools, colleges, and offices remain shut as the Maharashtra state government declared a holiday and advised people against going out. The India Meteorology Department (IMD) has predicted that heavy to very heavy rainfall may continue for the next 48 hours in parts of the city.

While experts say that linking this specific event of rainfall over Mumbai--home to 18.4 million--may need more research, it is well documented that the city along with other parts of the country located on the Western Ghats and Central India are increasingly becoming prone to heavy intensity rainfall. And the cities located in these regions will have to work on their infrastructure to avoid damages.

Ever since the flood of July 2005, when Mumbai remained submerged in waist-deep water for days killing over 1,000 people, city drainage infrastructure and the efforts of Brihanmumbai Municipal Corporation (BMC), the municipal body of Mumbai, have remained in question. The BMC has not been able to tackle these issues, as we explain further.

BMC chief Praveen Pardeshi, however, blamed climate change for the recent flooding. The BMC has been pumping out a massive amount of rainwater--something no other city in the world can match, said the senior civil service officer adding that the stormwater drainage system is not equipped to handle the amount of rainfall the city gets, Firstpost reported on July 1, 2019.

This attracted criticism over social media:

Isn't that a complete failure on your part of handling our infrastructure mr. Pardeshi? Shifting the blame is easy..doing your work is not. Negligence is being now made into a state holiday & we are being asked to stay indoors? #MumbaiRains #failurehttps://t.co/m95xyvBDJ4

'This' situation is NOT due to climate change. This is the direct outcome of the greed of the people to acquire the land that ensured the free flow of water finding its own destination. With no possibility, water stagnates. No steps initiated by BMC would ever give redressal.

Since June 1, rainfall in suburban Mumbai was 411 mm above average

When a delayed southwest monsoon arrived in Mumbai on June 25, 2019, the city received 283.4 mm rainfall in the last two days of June, 97% of the average June rainfall in the city and second-highest 24-hour rainfall in June in a decade, the Times Of India reported on June 30, 2019.

Since the start of June 2019, the two parts of the city have received 571 mm and 982 mm of rainfall respectively. This is 34 mm below average in the island city, and 411 mm above average in the suburbs. Meanwhile, the average number of rain days per monsoon season per year has reduced 11% over the past decade: from 92 in 2008 to 82 in 2018, BMC data show. 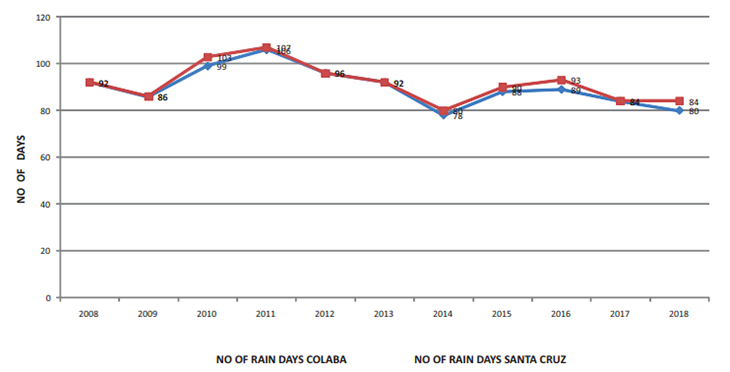 Over the last few days, Mumbai received its second-highest rainfall in 45 years--with the city receiving the average rainfall for the month of June in just three days, Maharashtra chief minister Devendra Fadnavis said.

But dealing with extremely heavy rain has become an annual affair for Mumbai.

Last year, on June 9 and 10, 2018, citizens were similarly stranded; the year before, on August 29, 2017, Mumbai remained submerged in waist-deep water in several places for hours after various parts recorded over 300 mm of rain in one hour.

To combat such days, the BMC relies on a patchwork solution of stormwater drains under rehabilitation, dewatering pumping stations, and trained disaster response.

The island city portion of Mumbai’s stormwater drain network is over a century old and is equipped to handle 25 mm of rain per hour; the suburbs with a relatively newer system can handle 50 mm of rainfall per hour.

To plug the shortfall in its drainage capacity, the BMC undertook the Rs 4,000-crore Brihanmumbai Storm Water Drains (BRIMSTOWAD) project, for which work began nearly 27 years ago in 1993, and construction of two of eight major pumping stations is yet to start. Additionally, the BMC annually identifies flooding spots around the city to engage dewatering pumps, manned by two persons each.

This year, as part of its pre-monsoon preparation work, the BMC said it has installed 298 smaller pumps across the city on storm water lines to overcome waterlogging in low-lying areas.

The situation on the ground, however, seemed different. Some of these spots visited by Hindustan Times were not completely addressed, the report said.

This was expected. Due to its topography and forming of various weather systems, Mumbai is prone to get this kind of heavy rainfall, Madhavan Rajeevan, secretary, Ministry of Earth Sciences, told IndiaSpend.

The BMC is doing really well but it should be geared for this kind of events every year now, he warned. The frequency of such heavy rainfall events in the city may also go up in the upcoming years.

It has been well documented that events of heavy rainfall with long dry spells have been increasing in central India and along the Western-coast. The cities located in these regions need to prepare, said Rajeevan.

While linking a particular event to climate change requires extensive analysis, it is clear that the increasing rate of intense rainfall events over Mumbai and the Western Ghats is due to rising temperatures, Roxy Mathew Koll, climate scientist at the Indian Institute of Tropical Meteorology, Pune, told IndiaSpend.

The temperatures over the Arabian Sea and over India were anomalously high during the last couple of weeks. This results in a moisture build up over time, and then episodical surges of this moisture on to the Western Ghats, Koll explained.

The positioning of a low-pressure system over the north Bay of Bengal may have also helped in anchoring the monsoon flow along the Mumbai coast, he said.

Over 110 years to 2010, heavy rainfall events in India show an increasing trend of 6% per decade, said a November 2017 study, as IndiaSpend reported on August 24, 2018. This was attributed to rising temperatures caused by climate change.

In 22 “cities of sizeable population”, 95% of monsoon precipitation occurs over three to 27 days, on average, during the 121-day southwest monsoon, an analysis by the Indian Express on September 4, 2018 found.

During the heavy rainfall events, water does not percolate into the ground and quickly runs-off, causing floods, Vimal Mishra, associate professor at the Indian Institute of Technology (IIT), Gandhinagar, told IndiaSpend. And, concretisation of urban spaces is to blame, as IndiaSpend reported on August 29, 2017.

As India’s climate warms, extreme weather, such as intense rain and floods, is predicted to worsen.

India accounts for a fifth of deaths globally due to floods and heavy rain, with 107,487 people dying nationwide over 64 years between 1953 and 2017, according to Central Water Commission data presented to the Rajya Sabha (Parliament’s upper house) on March 19, 2018. Damage to crops, houses and public utilities was reported to be Rs 3.66 lakh crore--or as much as 3% of India’s current gross domestic product--the data show.

On average, more than 1,600 people die every year in floods, which disrupt the lives of nearly 32 million people, the data show. More than 92,000 cattle are lost every year, seven million hectares of land--or nearly twice the size of Kerala--is affected and the damage is estimated at about Rs 5,600 crore, IndiaSpend reported on July 17, 2018.

India could see a six-fold increase in the population exposed to the risk of severe floods by 2040--to 25 million people from 3.7 million facing this risk between 1971 and 2004--IndiaSpend reported in February 2018, quoting a 2018 study published in Science Advances, a peer-reviewed journal.