As Cases Double In India's Green Court, It Pares Delays 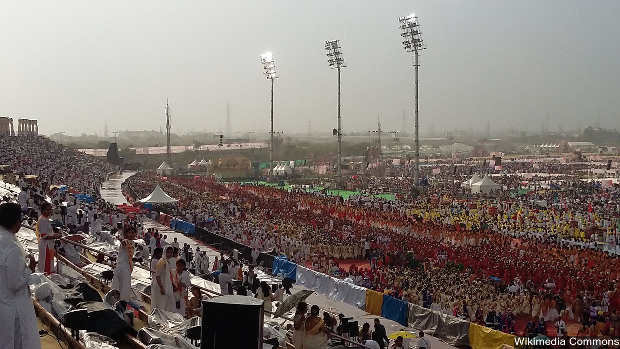 A festival organised by spiritual guru Ravi Shankar’s Art of Living, on the floodplains of the Yamuna river, near Delhi. The National Green Tribunal, which will deliver a judgement next month, has had as many cases filed before it in 2015-16 as over the last five years.

Within 120 days of first hearing the case, a final verdict on the alleged destruction of a part of the Yamuna's floodplains for a spiritual festival is due on September 28, 2016, an indication of the speed at which India's National Green Tribunal (NGT) is hearing and passing judgement.

Since 2010, when the NGT was established to exclusively hear cases related to environmental violations, cases before it have risen a hundred fold, until March 2016, according to government data submitted to the Lok Sabha, parliament's lower house.

Note: * As of March 2016, others figures refer for end of calendar year

Judicial delays plague most courts in India, as IndiaSpend has reported here, here and here.

The Art of Living—promoted by spiritual leader Ravi Shankar—"completely destroyed" the “entire floodplain area used for the main event site”, causing “invisible loss of biodiversity” that “may never be able to return”, according to an NGT-appointed committee of experts quoted in the Indian Express in August 2016.

The Nature Conservancy, an environment conservation advocacy, explains the concept of floodplains and why they are important, in this video: