Are We Getting A Grip On Natural Disasters? 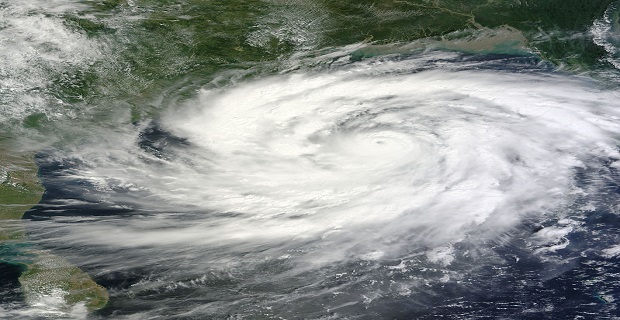 Until Cyclone Phailin arrived on the coasts of Odisha and Andhra Pradesh in November 2013, and the tide turned, quite literally. Government services were better prepared for the cyclone and its impact.

Which leads to a larger question. Was Uttarakhand an aberration in some ways? Particularly since data seems to show India’s overall record in managing natural disasters seems to be improving. Or, is the intensity of the calamities coming down? But we are also seeing more extreme weather events. Either way, it’s a bunch of question worth asking. For which we don’t have the answers.

In recent years, India has faced an unprecedented number of storms, earthquakes, tsunamis and floods. The following table shows a decade and more of natural disasters along with the damage caused by them - both to human and animal lives - and loss of property and crops. 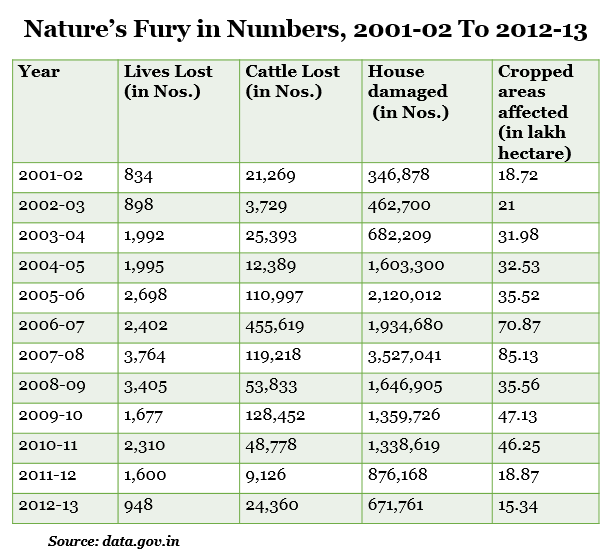 The Ministry of Home Affairs has set up guidelines for disbursement of funds under SDRF and NDRF. The funds are supposed to be used only for meeting expenditure to provide immediate relief to the victims of natural calamities. The funds required for mitigation, disaster preparedness, restoration and reconstruction cannot be met from NDRF and respective SDRFs, and states have to make provisions for these activities under their plan expenditure. For the general working, like funding various mitigation projects of the NDMA, the Disaster Management Act provides for creation of National Disaster Mitigation Fund (NDMF).

The State Governments concerned are primarily responsible for taking necessary measures in the wake of natural calamities. The central Government supplements the efforts of the states by providing requisite financial and logistic support.

At present, the financial assistance for natural calamities is channelised through the SDRF (which consists of contributions from the Centre and State in the ratio 75:25 in case of general category states & 90:10 ratios in case of special category states) and NDRF, which is fully funded by the Government of India.

The following figures shows the allocation and releases under the SDRF for states for 2010-11 and 2012-13: 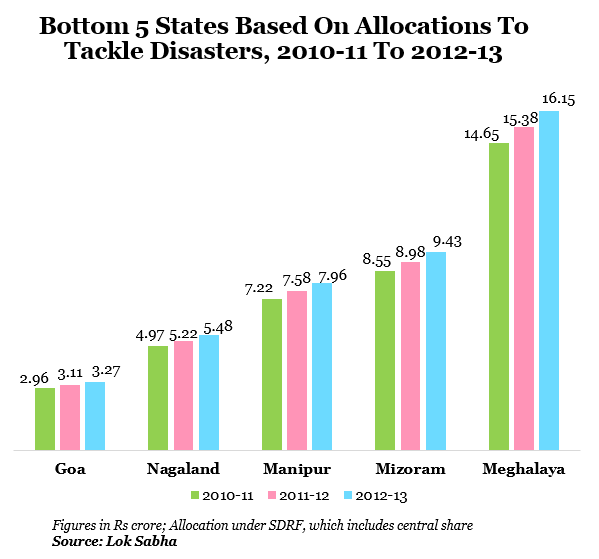 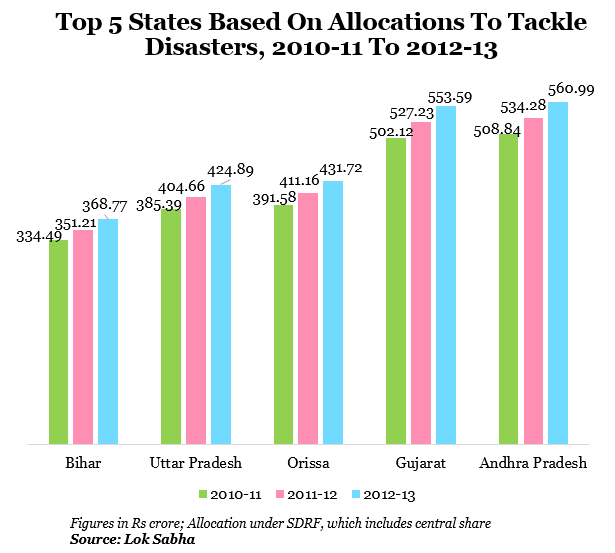 The Comptroller & Auditor General (CAG) or the Government’s auditor said in a recent report that many states have not invested SDRF funds as required by the guidelines set by the Ministry of Home Affairs.

The unspent funds have to be invested in central Government securities, treasury bills and other government securities. The CAG has calculated the potential loss for the states (where they carried out this audit) to be Rs 477 crore.

The auditor also found expenditure worth Rs 345 crore by states that was completely in violation of the guidelines set by the MHA. For example, Gujarat spent Rs 236 crore on relief even when no disaster was declared in the state!

NDRF & Its Role In Mitigating Tragedies

The National Disaster Relief Fund (NDRF) was constituted under the DM act of 2005 but came into existence only in September 2010. The fund was merged with the existing National Calamity Contingency Fund (NCCF) with fresh guidelines for its usage under the MHA. 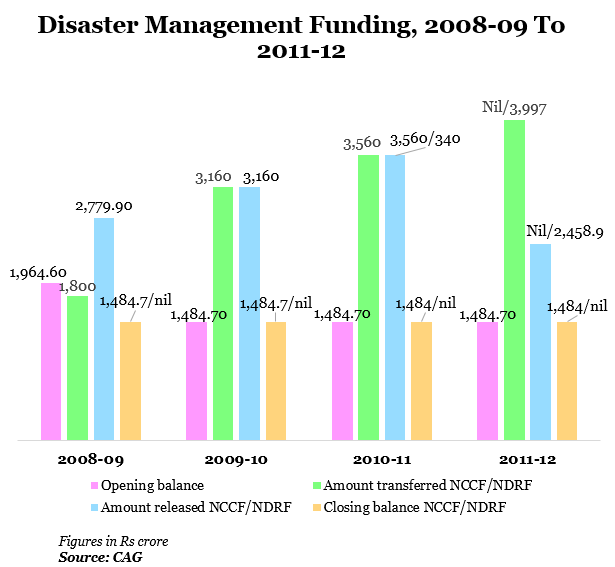 The CAG report also found that out of Rs 9,208 crore released, 34% were allocated for non-admissible items under NDRF.

Other than funding issues, NDMA has shown gaps in capacity building. Many specialist posts were vacant in NDMA and the National Institute of Disaster Management which appears to have hampered training procedures. Most specialist posts filled had consultants hired on temporary contracts.

The most important shortage was that of communication systems. Many systems that have been put in place are working in only in selected areas. For example, the ALTM digital camera used for predicting floods covered less than 10% of the flood-prone areas of the country. Another example of the failure of communications systems was the Synthetic Aperture Radar required for data collection on natural disasters, which has still not been completed 6 years after its launch.

Many experts do agree that India has, in theory, moved to better disaster preparedness on the field but a lot can still be done. Ray Kancharla of Save The Children, an international NGO that works on disaster relief operations in India says there is the absence of other stakeholders when it comes to disaster management.

Civil society and corporations are kept out of these efforts despite the fact that they can help. He further adds that with the addition of civil society and other stakeholders, communities can be reached better on the ground and it will also help to ensure accountability. “We can fashion disaster management on the lines of the Disaster Emergency Committee in the UK,” says Kancharla.

Anand Sankar, who recently wrote on the issue in Business Standard, says that while the NDMA seems effective on paper, there are gaping holes when it comes to implementation on ground. “For the NDMA to be effective, the state machinery should play an active role in the groundwork rather than waiting for the national body to come in for the rescue,” he says.

Both CAG and experts in the field point out that NDMA should concentrate not just on natural disasters but also man-made disasters. Man-made disasters like chemical leaks, forest fires and stampede can be avoided but NDMA has no clear policy on them.

India can perhaps take its cue from Federal Emergency Management Agency (FEMA) in the U.S, which has the authority to declare no-building zones and have to accord clearances to economic projects and major events that lead to people congregating.

Such measures can help reduce disasters like the stampede that took place in Madhya Pradesh recently. And the dearth of enforcing agencies at the state-level to take up the responsibility of disaster prevention.