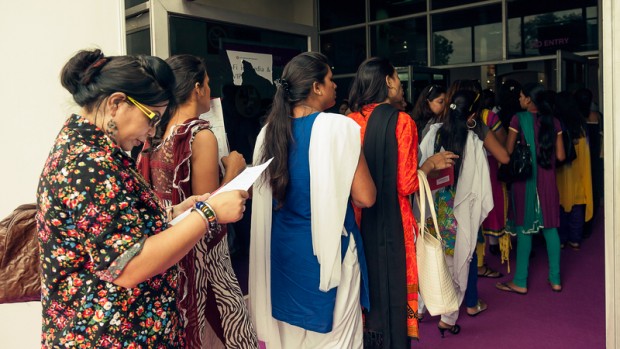 If you’re ever scouring job ads online or in a newspaper, how often have you seen one like the ad below for an IT company in Delhi:“Receptionist-cum-office administration (female only)”? 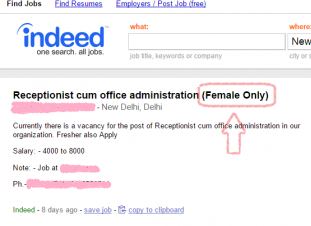 Chances are, a lot. And one enterprising little study even took it upon itself to quantify that figure. Looking at a small sample of around 950 classified ads in a leading Indian daily, the study by Rahul Anand from the social enterprise TheBetterIndia, found that women were preferred in 146 or around 15% of the ads. And the offenders? The usual suspects such as ads for receptionists, call centre workers and salespeople. 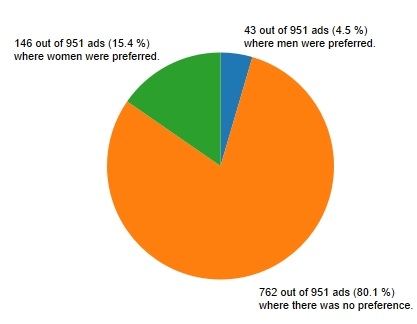 And it’s not just women who were preferred in certain professions; male candidates were preferred in many ads for clerical and sales jobs too. In total around 20%, or one in five ads, expressed a preference for a certain gender, male or female.

While the government is prohibited constitutionally from discriminating against anyone on grounds of sex or gender, from the blatant demand for candidates of a specific gender, it seems the private sector doesn’t suffer from any such restrictions. It could be asked though, even if the practice is not illegal, is it ethical?

Now some countries, such as the US, prevent employers from discriminating against anyone because of their gender. But the public sector there is actively encouraged to exercise some form of “affirmative action” or positive discrimination.

It wouldn’t be right to borrow our public morality from societies elsewhere. But it would make sense, in a country such as ours with a record of historical discrimination against certain groups, for there to be a similar practice of not negatively discriminating against anyone while, at the same time, exercising some form of positive discrimination to ensure certain groups are represented more.

However, if you examine the kinds of ads in which women were preferred, such hiring is hardly done with the intention of improving diversity in the workplace. Instead, they only serve, as in the case of receptionists, to reinforce the gendered perception of that particular job.

But do the stats support the view that a certain profession is “gendered”? If we look at the dataset used in the study mentioned above, 49 out of 119 ads (41.2%) in the receptionist/secretary/front office asst. category did express a preference for women but 67 ads (56.3%) didn’t. So if more than half the ads for that category didn’t express a preference, would it be right to say that there is a gender bias in hiring for this job category? And is the 41.2% figure evidence of a receding bias?

The thing is that given how many people are employed in this category throughout India, even 119 ads may not be large enough a sample for us to derive any valid conclusions for the country as a whole. And not to mention the fact that if we were to try and figure out if there is a gender bias for an occupation, it is not only recruitment ads that would have to be looked at.

We would also have to look at the gender break-up of the people who are actually hired as well as of those currently employed in that category in the workplace, whether gender affects someone’s move up the hierarchy etc.

However, it is not as if there is nothing to take away or learn from this study. For example, you would think that only ads for lower-skilled clerical or sales jobs would express a preference for a certain gender. But according to this dataset, 9 out of 47 (or 19% of) ads for jobs at the managerial level had a gender preference too.

So if we were to take our academic hats off and restrict the scope of our investigation to the data available—while recognising its limitations—there is no doubt that this is still a very interesting dataset for us to be poking our heads into.