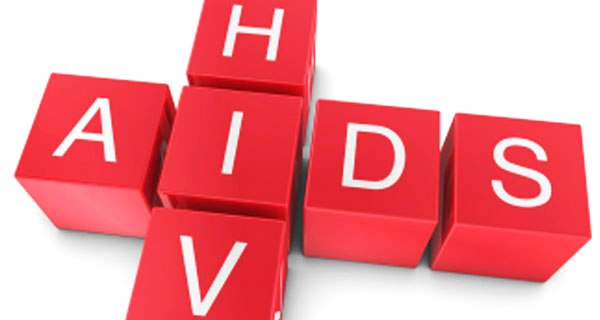 * While HIV prevalence is declining in India, it still ranks third in the world with people affected by HIV.

* Government funding to fight HIV has traditionally been low compared to external funding from various sources.

December 1 is marked as World Aids Day, and there were media reports in India about the remarkable drop in people living with Human Immunodeficiency Virus (HIV) despite the fact that India is third in the world with people affected by HIV. As per a UNAIDS World AIDS Day Report, South Africa has the maximum number of HIV patients at 5.1 million followed by Nigeria with 3 million.

IndiaSpend’s Sourjya Bhowmick looked at the Technical Report on India HIV Estimates of National Aids Control Organisation (NACO) and the state factsheet of National Aids Control Programme. The key findings: HIV prevalence is slowly declining in India. While Andhra Pradesh has the highest HIV prevalence, Uttar Pradesh has the lowest number of cases. Punjab, which is among the highest HIV-prevalent states, receives one of the lowest funding for treatments. And government funding to fight HIV has traditionally been low compared to external funding from various sources.

HIV prevalence among the adult (15-49 years) in India is estimated at 0.31% in 2009 and there were approximately 2.4 million People Living with HIV/AIDS (PLHA). Table 1 gives an idea about India’s progress in the battle against HIV.

Table 2 gives an idea about the distribution of HIV prevalence, the number of people affected, new infections and deaths due to Acquired Immunodeficiency Syndrome (AIDS) in different states. 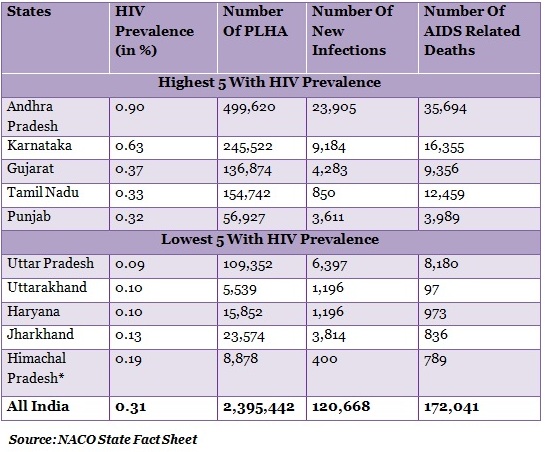 *Maharashtra, Kerala, Madhya Pradesh and Rajasthan also have a prevalence rate of 0.19 but PLHA numbers are far higher than Himachal. Thus, Himachal has been taken in the table.

The highest 5 states in HIV prevalence make up 77,853 of all deaths. Andhra Pradesh has very high prevalence, and Karnataka, which comes second, is only 0.27 points behind Andhra Pradesh. Interestingly, Tamil Nadu, which also has high prevalence (.33%), seems to be doing well in its prevention campaign as the number of new infections has dropped drastically to 850.

The biggest surprise in the lowest 5 states is Uttar Pradesh (the lowest prevalence) and Jharkhand. But Uttar Pradesh has a high number of PLHA, which is a matter of concern. The reasons could be the size of the state, population and the high rate of migration.

The anti-HIV programme is funded in India through the National Aids Control Programme (NACP). The programme funds information, education, communication, condom promotion, blood safety, care support and treatment, counselling and testing services for targeted groups. It is funded by the government and through external aid.

So, let’s look at the funding that states have received for their anti-HIV programmes and the expenditure as on March, 2012:

Table 3: How Much Money? 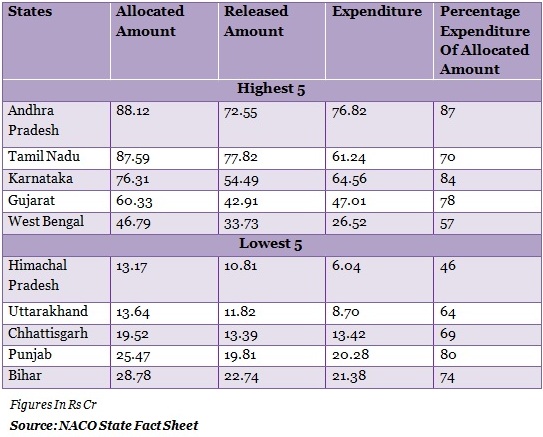 States that have the highest HIV prevalence are funded heavily, which is not very surprising. However, none of these states had an expenditure of more than 90%. Punjab, which is among the top 5 states with HIV prevalence, quite surprisingly, is among the states that have the lowest funding. Himachal Pradesh, which is doing well in almost all its social indicators, has the lowest expenditure against the allocated amount.

Let’s now look at the overall funding received to fight HIV in India. 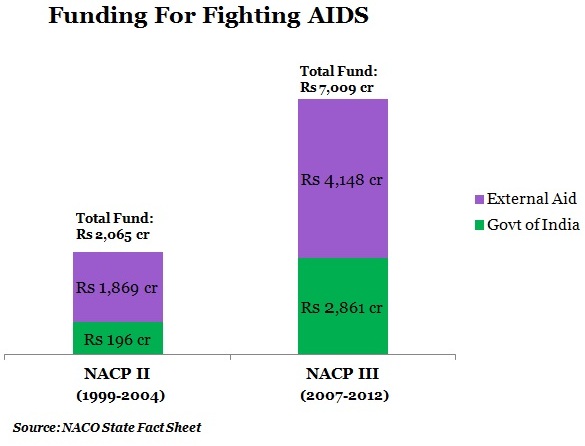 Unfortunately, data for NACP I was not available. We can see that the funding has increased hugely for NACP III, which will come to an end soon. External aid in the form of funds from World Bank, USAID and DFID has always been higher compared to the budgetary support provided by the government. Keeping in mind that DFID has already announced plans to stop funding projects, it is high time the government allocates more funds to fight AIDS.