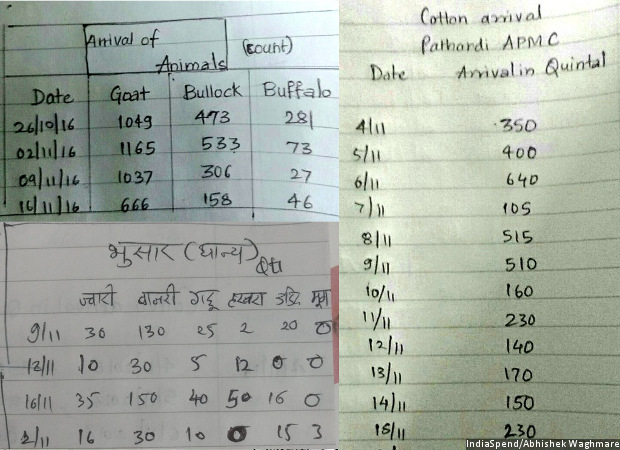 The agricultural market at Pathardi, in Ahmednagar district of Maharashtra, is where most agricultural trade in the region takes place. Market registers showed that arrival of vehicles loaded with agricultural produce fell by 75%, cotton by 80%, and the sale of cattle fell by 50%, in comparison to the week before the ban of notes.

A week after Prime Minister Narendra Modi announced the scrapping of Rs 500 and Rs 1,000 notes--86% of India's currency notes by value--business in the agricultural market of Pathardi, 350 km east of Mumbai, fell by 60%, indicating how the rural economy of India’s richest state, Maharashtra, recovering from two years of drought, is slowing down.

Pathardi’s Agriculture Produce Market Committee (APMC), representative of 2,500 such markets in India, is where where most agricultural trade in the region takes place--almost all of it in cash. A slowdown in these markets can have wide-ranging effects on farmers, traders and the Indian agricultural economy.

The arrival of vehicles loaded with agricultural produce entering the Pathardi market fell by 75%, arrival of cotton dropped by 80%, and the sale of cattle fell by 50%, in comparison to the week before the ban of notes, according to data gathered by IndiaSpend from market officials.

The ban on Rs 500 and Rs 1,000 notes has pushed farmers--who transact in cash and are still largely distanced from formal banking institutions--out of the farm economy.

Bhimsen Mahadev Ghuge, a 50-year-old cotton farmer, lost 15% on a cotton transaction. He did not want the money in old notes, so he sold his produce to an unregistered trader outside the APMC market gate for Rs 4,200 per quintal, lower than the market rate of Rs 5,000 per quintal.

“I have to manage my family expenses and pay the wages of labourers who work in my farm in Rs 100 notes,” Ghuge said. “I have incurred a huge loss this season.”

Traders at the Pathardi market were willing to pay for produce and cattle in old notes or, new notes of Rs 2,000. But farmers, whose daily expenses are much lower, are unwilling to take Rs 2,000 notes, unsure of whether they would be able to change it for more usable notes of smaller denominations.

Farmers said they did not want old notes because they were uncertain they would be able to exchange the notes for new currency.

“Initially, some farmers accepted the old notes confident they could deposit the money in the bank. But few farmers continued to accept the old notes after November 21,” Vaibhav Dahiphale, director of the Pathardi APMC, told IndiaSpend. Still, traders continued to transact in old cash and as a result several have had to shut shop, said Dahiphale.

Cotton reaches the market in November, and APMC officials expected daily transactions to reach Rs 50 lakh ($77,000) because of a good harvest this year, Dahiphale told IndiaSpend. But, after demonetisation, transactions amounted to a maximum of Rs 30 lakh ($46,000) a day, based on data collected from the market.

Some traders, such as those buying cotton, have shut shop to protest against the unavailability of cash in the market, and blamed the government for not ensuring enough cash.

If there is no cash, why can’t traders pay farmers by cheque?

Traders in Pathardi APMC do not prefer cheque as a mode of payment to farmers, IndiaSpend found, as they keep most of their money in the form of cash.

Farmers too feared that cheques might not translate into money in their bank accounts. “I am not sure I will receive money after I deposit the cheque. The cheque might bounce,” said Ghuge.