Agriculture In 115 Indian Districts Most At Risk From Climate Change 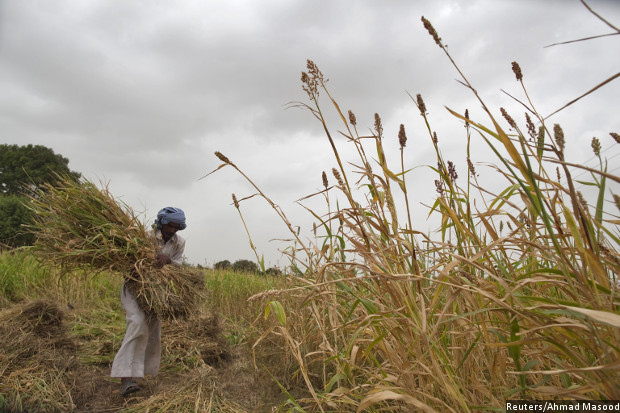 A farmer harvests partially damaged crop due to lack of rain. The first to analyse 38 meteorological, agricultural and social data across all of India’s 572 rural districts, a new study creates a climate vulnerability index for agriculture. Despite the research, farmers across the country are unprepared for climate-change.

As floods ravage eastern and northern India, agriculture in 115 districts across 15 states is "highly vulnerable" to climate change, according to a May 2016 study, published in Indian Academy of Science's journal Current Science.

The first to analyse 38 meteorological, agricultural and social data across all of India's 572 rural districts, the study creates a climate vulnerability index for agriculture, divided into five categories of vulnerability: Very high, high, moderate, low and very low.

The vulnerability index has already been used by the Indian Council of Agricultural Research to demonstrate climate-resilient agricultural practices in 121 of either the "very high" or "high" vulnerability districts identified by their study, study coauthor Alok K. Sikka, India representative and principal researcher at the International Water Management Institute, New Delhi, told IndiaSpend.

While the study is possibly the most comprehensive yet, independent observers said it may yet be inadequate to inform local decision-making on climate change.

Top 10 Districts Where Agriculture Is Most Vulnerable To Climate Change

Note: Most vulnerable district is marked by the largest bubble, and so on.

The new study's 38 indicators, used nationally, are subdivided into three categories--sensitivity, exposure and adaptive capacity. Some of the indicators that define sensitivity include degraded land, annual rainfall, and vulnerability to cyclone or drought. Exposure is defined by indicators such as maximum and minimum temperature, heat-wave or cold-wave frequency and dry spells. Adaptation indicators included workforce in agriculture, literacy, gender gap, rural electrification and paved roads etc. 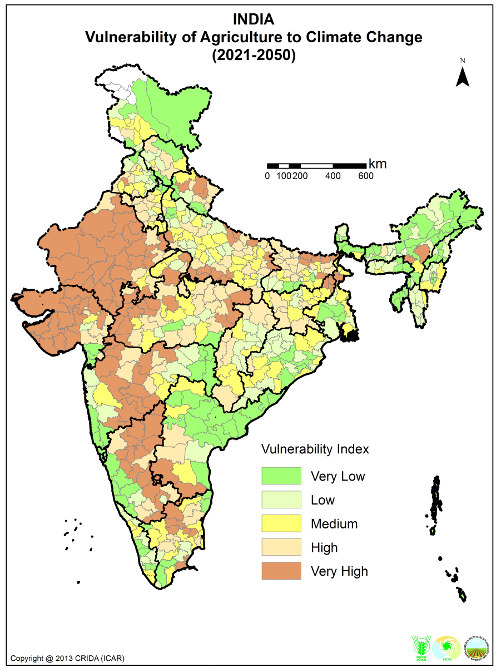 What do the categories mean?

The index reflects relative vulnerability of a district, on a scale from 0 to 1, with 0 being the least vulnerable.

The index furthers research into India's climate-change vulnerability, at a time when, as IndiaSpend reported in April 2015, extreme rainfall events in central India, the core of the monsoon system, are increasing and moderate rainfall is decreasing—as a part of complex changes in local and world weather.

This is not the first time scientists have tried to compute Indian agriculture's vulnerability to climate change (Some previous studies are here, here and here), but these have been localised.

An index of this kind holds great potential in helping formulate strategy and even policy for climate-resilient agriculture. A good vulnerability assessment should “help in identifying adaptation options”.

“Our study chose to reflect the changing climate in terms of indicators like changes in rainfall, dry spells, temperature etc, which are of actual use in adaptation research," said C. A. Rama Rao, study coauthor and an agricultural economist with the Central Research Institute for Dryland Agriculture, Hyderabad. 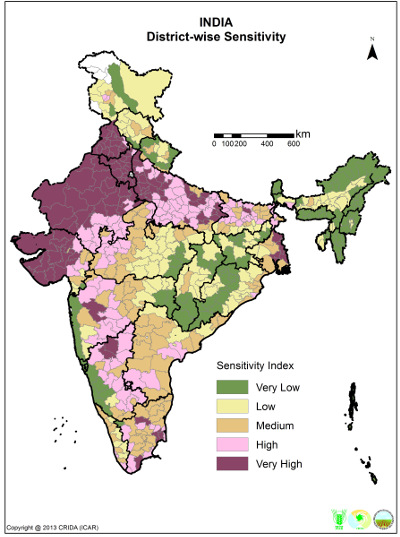 A May 2016 study, published in Indian Academy of Science’s journal Current Science, analysed 38 meteorological, agricultural and social data across all of India’s 572 rural districts, and created a climate vulnerability index for agriculture. The factors are subdivided into three categories–-sensitivity, exposure and adaptive capacity. The maps above show how the districts ranked on these three broad categories.

But assessing climate-change vulnerability is a process so complicated that even the wide-ranging datasets used by the new study may be inadequate to inform policy on climate change.

The index should be used with “great caution" since data have not been "obtained on all the variables/indicators for a uniform reference period”, said Ravi Khetrapal, regional advisor of strategic science partnerships at the Centre for Agriculture and Biosciences International (South Asia), a nonprofit focussed on agriculture research. He also said the data have "not been collected for a reasonable period of time and averaged”, a flaw the authors acknowledge in the paper.

While “district level analyses are good to provide a snapshot of vulnerabilty, more data at the micro level is needed for validating trends”, said Divya Mohan, science policy officer at the Swiss Agency for Development and Cooperation, New Delhi. Mohan has previously worked on vulnerability in the Indo-Gangetic plain.

Climate-resilient agriculture in India has started getting attention

Climate change could effectively negate India’s economic progress, pushing 45 million Indians into extreme poverty over the next 15 years, according to this November 2015 World Bank report. The report recommended the use of more climate-resistant crops and livestock to counter a predicted drop in agricultural productivity.

The Current Science study indicates that climate-resilient agriculture is now receiving attention from researchers and policy-makers.

The vulnerability index paper is the result of a 2011 central government programme called NICRA (national innovations on climate resilient agriculture), which enables research partnerships between 40 ICAR institutes in various agricultural sub-sectors, such as field crops, horticultural crops, livestock, and fisheries.

Despite the research, farmers across the country are unprepared for climate-change. "Thanks to ICAR, we are doing well in terms of research but not enough in terms of extension and development programmes by state governments,” said Khetrapal.

The vulnerability index may have its flaws, but it is possibly the only tool currently available to assess Indian agriculture's susceptibility to changing climate. How it will be used to make a difference to farmers so affected is another matter.