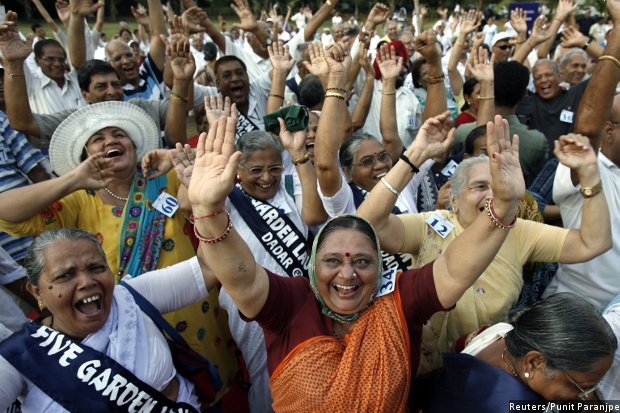 India has long been described as a nation of young people—and that is true—but the country’s elderly (60+ years) population grew 27 million between 2001 and 2011, the largest increase (about 35%) over a decade, according to latest government data.

India’s ageing is being driven by a falling fertility rate—especially in the south—and growing life expectancy.

With 8.6% of India’s population older than 60, a growing economic responsibility will be evident on the working population, as what is called the old-age dependency ratio rises.

Calculated by counting non-working age people per 100 of working-age people, “the old-age dependency ratio shows an increasing trend, and the ratio has risen from 10.9% in 1961 to 14.2% in 2011”, according to this report released by the Ministry of Statistics and Program Implementation (MOSPI).

A young country with more elders to support

India’s demographics are changing, as we can see from the trends in the chart above.

“Every month for the next several years, 1 million Indians [will be] turning 18,” said The New York Times journalist Somini Sengupta in an interview with The Guardian, describing what inspired her to write her new book, The End of Karma.

While India’s median age will be 29 by 2020 (China, 39; Brazil, 33; US, 40)--the youngest and largest workforce “that the world has ever seen”, as this World Bank document described it--the working population (15 to 59 years old) will have to support two groups of non-working people: Children aged 0-14 years and the elders (above 60). Some elderly may have pensions and savings, but children are completely dependent.

India’s demographics show fewer children and more elderly, which means government policy must start focusing now on pensions and retirement security for the elderly and the working population.

No more than one in 10 private-sector retirees in India has pension and health cover, as IndiaSpend has reported. There is also growing discontent among private-sector workers about government attempts to force retirement savings, as recent rioting by garment workers in Bengaluru revealed.

India’s northeastern states have the least proportion of elderly—Arunachal Pradesh is the lowest with 4.6% people above 60 years.

South Indian states have the highest proportion of elderly, a consequence, as we indicated, of fewer children and falling fertility. Kerala leads the pack with 12.6% elderly, followed by Goa (11.2%) and Tamil Nadu (10.4%). Andhra Pradesh is not among the top five, but has 9.8% elderly people.

Many states in India are ageing faster than Scandinavia, as this 2013 IndiaSpend analysis noted. We compared fertility rates, the number of children per woman of child-bearing age.

Kerala and Tamil Nadu, at 1.7, had lower fertility levels than Norway and the Netherlands, at 1.9 and 1.8 respectively.

Replacement level of fertility refers to the number of children women should have to keep the population stable. If a woman has 2.1 children, the population neither increases nor decreases.

States with fertility levels lower than replacement levels are ageing faster because fewer children are being born.

As long as India’s working-age population is in a majority, the elderly will find some support. In many states, as we have seen, that may not be the case.

Why ageing women will struggle to get by

Until 1991, there were more elderly men than elderly women, as the MOSPI report noted: 104 million people above 60, including 53 million women and 51 million men.

“In the last two decades, however, the trend has been reversed and the elderly females outnumbered the elderly males,” the report said.

Elderly women are more vulnerable than elderly men because they have weaker financial support. No more than a fourth of Indian women work, as IndiaSpend has reported. This means women will particularly struggle as they age.

Some elderly people continue to be a part of the workforce; as many as 66% of men above 60 and 28% of women in rural areas work, mainly as marginal workers, according to data from Census 2011.

“In urban areas, however, it was only 46% among elderly men and about 11% of elderly women who were economically active,” said the MOSPI report.