Students walk in a street in Sanjeeva Reddy Nagar, Hyderabad's IT skills training hub. Not only were fewer women training themselves for the labour market, far more women were married by age 22 in 2016 than men, according to a longitudinal study.

While three out of four men headed to work, about one in two women stayed at home by age 22 in undivided Andhra Pradesh, according to the preliminary findings (here, here and here) of an ongoing global longitudinal study of childhood poverty.

Not only were fewer women training themselves for the labour market, far more women were married by age 22 in 2016 than men, according to research by Young Lives India--the India chapter of Young Lives, a study of childhood poverty funded by the University of Oxford, UK--in undivided Andhra Pradesh since 2002.

These data lend weight to other studies that show Indian women are at a significant and possibly widening disadvantage. Gap between men and women has widened on political empowerment, healthy life expectancy and basic literacy, resulting in India slipping 21 places to 108 in 2017 from 87 in 2016 on the Global Gender Gap Index of the World Economic Forum, FactChecker reported on November 3, 2017.

India’s female labour force participation rate, at 24%, was below the world average of 39% in 2016, according to World Bank data. India was ranked 172 among 185 nations for which data were available.

Indian women are increasingly dropping out of the workforce for various reasons including unsafe workplaces and stigma attached to working women, according to the ongoing IndiaSpend series on why fewer women are working (see here, here, here, here, here and here).

By 2025, India will need 2.5-3 million more skilled workers, according to this June 2017 report from the McKinsey Global Institute.

Youth who pursued training with certification was the highest among other castes (11%), top wealth households (12%) and urban locations (9%). 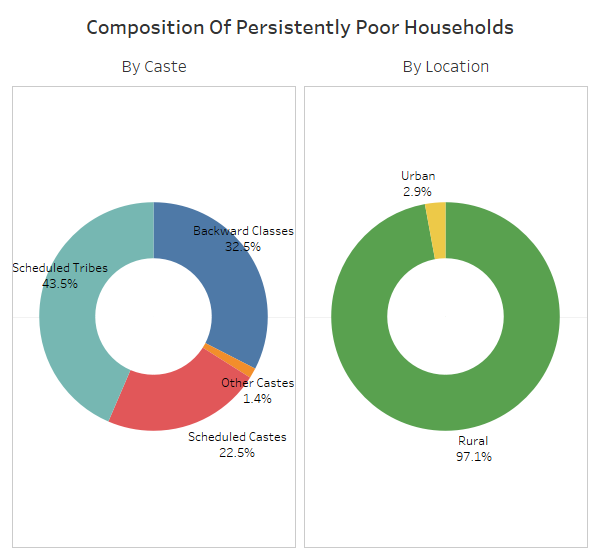 Source: Young Lives IndiaNote: Persistently poor households are those that remained the poorest third from 2002 to 2016

Source: Young Lives IndiaNote: Stunting is defined as percentage of children shorter than the median child for an age group and gender