After Uttarakhand, Will Arunachal & Sikkim Be Next? 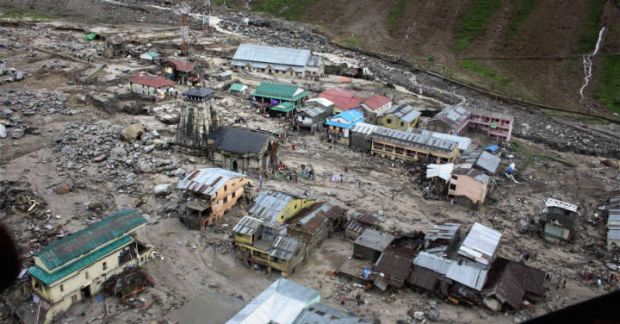 India’s northern state of Uttarakhand is struggling in the aftermath of flash floods which caused massive destruction of life and property. At last count, over 500 have died.

The tragedy has also turned the spotlight on the unmitigated construction activity in the environmentally sensitive hill areas, notably the vast number of hydel power projects.

India's federal auditor, the Comptroller & Auditor General (CAG), in a report submitted four years ago warned Uttarakhand as well as the Central Government of potential hazards arising from the 42 hydropower projects in the state as well as some 200 under construction.

But Uttarakhand is not alone. India’s earthquake-sensitive, north-eastern hill states like Arunachal Pradesh and Sikkim are also seeing a frenzied construction of new power plants.

Most of this capacity is meant to serve consumers elsewhere because the states are already meeting most of their own demand. This report does not delve into the environmental assessment impact of these additional power plants. And yet, the scale of projects planned and underway is staggering.

For instance, the Arunachal Pradesh Government had, as of March 2013, signed memorandum of agreements (MOAs) for 153 hydel projects adding up to a whopping 43,118 MW. This is almost 19% of India’s total installed capacity of 225,133 MW! The good news perhaps is that most of these projects are yet to take off.

Sikkim as per the latest list submitted recently by the Government in High Court, has 26 live hydro power projects with a total revised capacity of 4190.50 MW. This included 570 MW commissioned by NHPC and an additional 730 MW by the public sector National Hydroelectric Power Corporation (NHPC) under construction.

The large number of power projects on the runway does not in itself mean that an Uttarakhand-like disaster will strike but warnings have been sounded for a while, mostly by locals. There have been a fair amount of media reports on Arunachal's 'hydel gate' too but fewer have focussed on the potential environmental hazards. Arunachal for instance lies in Seismic Zone V, or very 'high damage risk zone'.

In contrast to the massive line-up, current power demand in the two states stands at just 589 MW for Arunachal Pradesh and 409 MW for Sikkim. Incidentally, total installed capacity in the north east of India is 2,885 MW while peak demand is 1,899 MW. Actual demand met stands at 1,718 MW right now, leaving a deficit of 9.5% (181MW).

Projects worth another 690 MW are under construction. The NEEPCO is building one 600 MW plant while the state government is building 72 mini projects with a combined output of 91.9 MW.

Sikkim generates around 610 MW of electricity; of this 40.70 MW comes from the state government while the balance 570 MW comes from the NHPC. There are approximately 10 projects at various levels of construction in Sikkim which would potentially add 1,000 MW capacity. Projects include Gati’s 97 MW project and Jorethang’s 97MW. Assuming a cost of Rs 7 crore per MW, the total cost of these projects would be at least Rs 7,000 crore.

There is concern that these ambitious plans might be good to meet energy deficits but dangerous environmentally. While this report is not delving into environmental assessment issues, it’s interesting to note that many projects have gone to developers with no prior experience. A fact pointed out in recent media reports as well. They include Gati, a cargo & logistics firm, Athena Energy Ventures, which has had some construction experience but one leg of the trail ends up at the door of a finance company – Karvy Financial Services. Similarly, Dans Energy was a finance company before it also joined the energy race in the north-east state.

Second, it is alleged that the Environment Impact Analysis (EIA) studies prepared have lacked vital inputs like seismological data and geological formation studies. Moreover, huge tracts of forest lands have been diverted for non-forest use, involving felling of thousands of trees. In Himachal Pradesh, to use a concurrent example, 78 square kilometres of forest were engulfed by hydroprojects. The compensatory afforestation programme by project developers is often faulty and inadequate.

It is also felt that the environmental issues are not getting the attention they deserve from the Ministry of Environment and Forests (MoEF). For instance, the ministry has set the minimum distance between two dams at 1 km; reason being that the 1 km distance is the bare minimum between dams on the same river or tributary needed to preserve aquatic life.

There are charges of developers manipulating river flow data, discharge of water data, flouting norms on deposition of muck from drilling and blasting as well as felling of trees and not fulfilling the compensatory plantation. There have been wide scale protests across the Himalayas against these practices. In Sikkim, organisations like the Sikkim Bhutia Lepcha Apex Committee (Siblac) and the Affected Citizens of Teesta have been protesting the hydro power projects.

The CAG in a report on the power projects, said: “The terms of the High Powered Committee-endorsed hydro power policy are loaded in favour of the IPPs (Independent Power Producers). Sikkim charged an absurdly low upfront premium of Rs 10,000 per MW of installed capacity towards non-refundable processing fee while states like Himachal Pradesh, Arunachal and Uttarakhand were demanding and getting huge up-front premiums from private hydropower developers.

So, why are the states going hell for leather in setting up these projects, despite the potential environmental hazards? Revenue from power seems to be a key consideration. Arunachal, for instance, has collected substantial sums as processing fee and upfront premium from the project developers. There have been multiple reports of corruption as well.

And there are other concerns. Questions are being raised about the state’s authority in giving away land for any project. In Arunachal, all land rights are with the tribal communities. The same applies to Sikkim, under article 371f, as most of the land is tribal land with no right to purchase, sell or lease being vested with non-tribals.

As this report started by saying, projects signed up do not mean executed. As it turned out. Most Arunachal projects were signed off between 2006 and 2009, a boom period of sorts. This trend is similar to excesses in other resource-led industries like coal, in the same period. Be that as it may, the Uttarakhand disaster should surely serve as a strong warning sign to any environmentally sensitive infrastructure projects, particularly in the virgin hill states of India.

(Soumik Dutta is a journalist based in Sikkim)