After 5 Years Of Fall In Learning, (Some) Progress For India’s Primary Schools 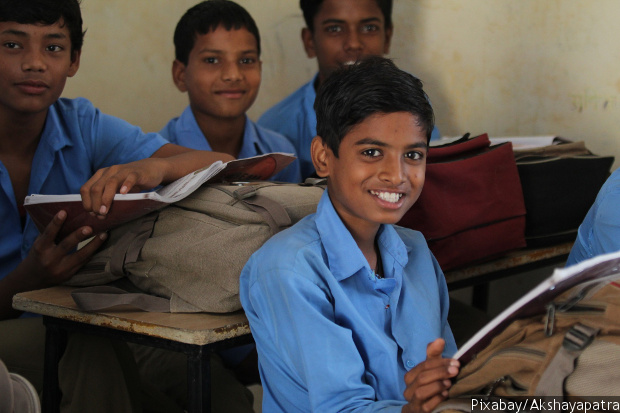 For information on learning outcomes, the ASER survey interviewed 562,305 children, from 350,232 households, including children who were not enrolled in or, dropped out of school. The survey, focused on rural areas, included 17,473 villages in 589 districts. 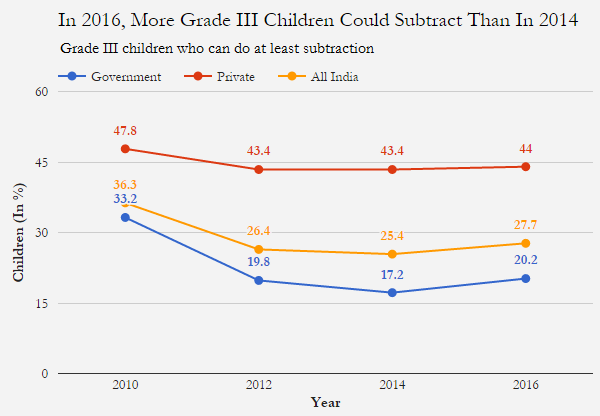 Still, these learning levels are low, and many of India’s 259.5 million school children are not learning in school. With persisting low outcomes--for instance, less than half of children in grades V (49%) and VII (43%) can divide--it is unlikely that India will be able to completely reap the demographic dividend from its working age population of 869 million by 2020--the largest of any country. 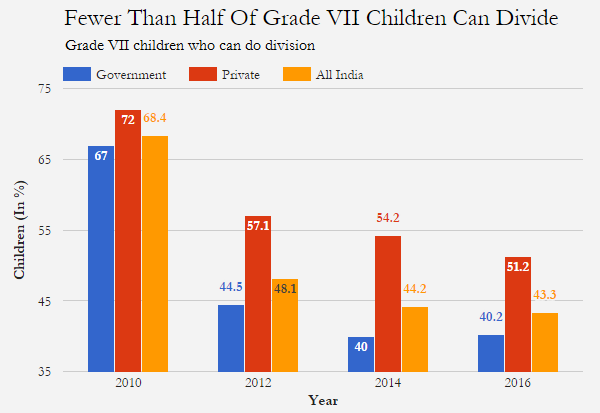 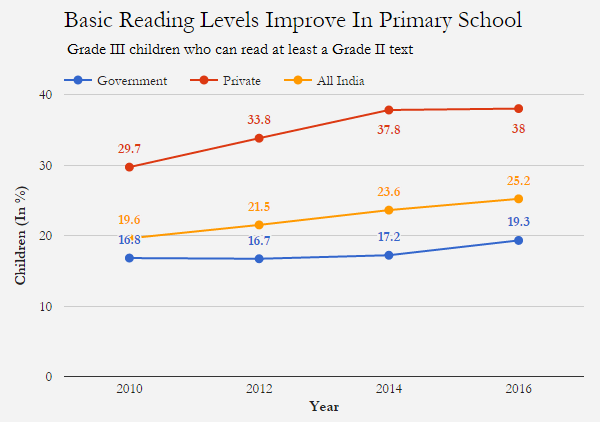 It is difficult to pinpoint the reasons for the improvement or decline in learning outcomes, and reasons differ across states, Wilima Wadhwa, director of the ASER centre, told IndiaSpend.

Improvement in indicators, such as the pupil-teacher ratio and mid-day meals, could have helped improve results in 2016.

For school-level data, such as infrastructure, attendance and teachers, ASER surveyors, who are mostly local volunteers (and can include college students, non-governmental organisation members and women from self-help groups), visit one school in every village.

Well-designed interventions can also boost learning. For instance, an innovative teaching system in six Rajasthan districts recorded average score increases--irrespective of gender and social background--of 45% in Hindi, 26% in English and 44% in math, as IndiaSpend reported in October 2016.

Even with some progress in learning, challenges for schools in rural India remain.

As several students sit in one classroom with the same teacher or teachers, more training and different kinds of pedagogy would have to be used to reach every child, according to an ASER 2011 report. The RTE Act does not specify any regulations for multi-grade classrooms, and it is possible that schools provide few teachers trained for multigrade classrooms.

In addition, teacher vacancies persist in India. Of six million teaching positions in government schools nationwide, about 900,000 elementary school teaching positions are vacant, as IndiaSpend reported in December 2016, according to an answer given to the Lok Sabha (lower house of Parliament).

Politically, education is still not seen as a vote-gathering topic, said Arvind Subramanian, the government’s chief economic adviser, at a panel discussion hosted by Pratham, the education nonprofit that conducts the ASER survey.

In 2015-16, Indian central government spending on school and higher education was less than other BRICS countries--India spent 3% of its gross domestic product (GDP) on education, compared to 3.8% in Russia, 4.2% in China, 5.2% in Brazil, and 6.9% in South Africa, according to 2016 data from India’s Ministry of Statistics and Programme Implementation.

(Salve is an analyst, and Shah is a writer/editor with IndiaSpend.)