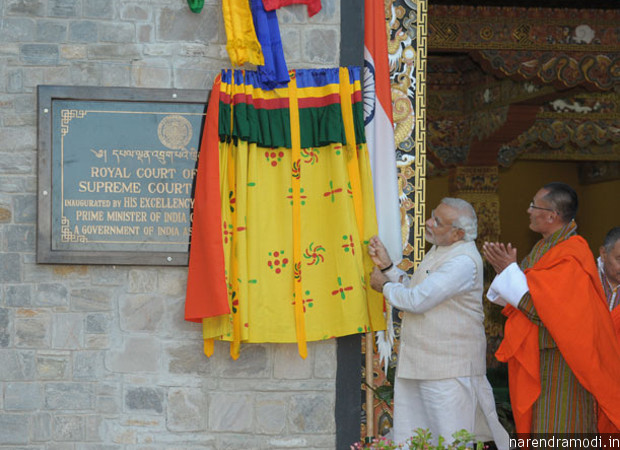 The monarchy of Bhutan has remained the biggest beneficiary--by amount and share--of Indian foreign aid for 17 years, but over the last nine years, Afghanistan has made it to the distant second spot, preferred over traditional recipients Nepal and Bangladesh, according to an IndiaSpend analysis of Indian foreign ministry data1.

Although its share of foreign aid is falling and that of African countries, listed as a group, is growing, Bhutan has remained India’s unfailing priority because of its strategic location, its dependence on India and its hydropower potential. Indian aid to Sri Lanka and the Maldives increased fastest, according to aid data between the financial years 2000-01 and 2016-17.

Source: Notes on Demands for Grants for Ministry for External Affairs in Union Budgets1

Among the countries to have benefited most by India’s reallocation of aid is Afghanistan. 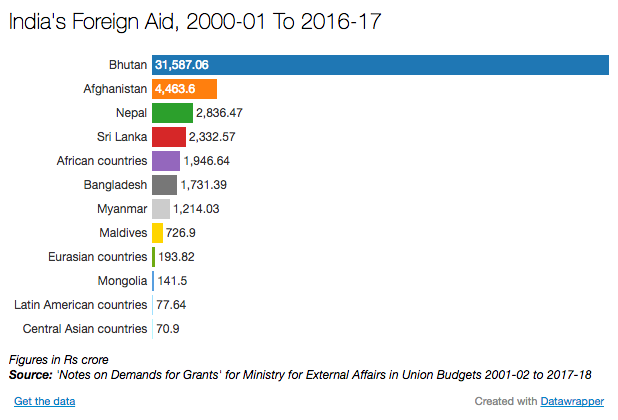 In eight of last 10 years, Afghanistan makes it to second spot

Before the financial year 2007-08, the foreign ministry did not even report aid for Afghanistan individually. Since then, it has been the second biggest beneficiary, by share, in eight of the following 10 years.

In the pre-2007-08 period, Nepal was the second-largest recipient in all years except three, when Bangladesh held that position. Over the 17 years we analysed, Afghanistan received the least aid of the 12 major regions reported by the ministry, the allocation shrinking more than a quarter by amount.

Source: Notes on Demands for Grants for Ministry for External Affairs in Union Budgets1Note: Please choose 'Unique Colors' under the 'Color' dropdown, 'Foreign Aid (As % of total)' under the 'Size' dropdown. Year denoted is financial year.

The only constant in this story is Bhutan, but other countries in other regions have been eating into its share at a time when questions are being raised about India’s policy of aid to Bhutan’s hydropower sector. By change in share over the 17 years, it is better only than Afghanistan, with Bhutan’s aid having fallen by 10.45 percentage points.

Correction: An earlier version of this story erroneously identified Bhutanese prime minister Tshering Tobgay as the country's monarch at the time, King Jigme Khesar Namgyel Wangchuck, in the cover image. We regret the error.