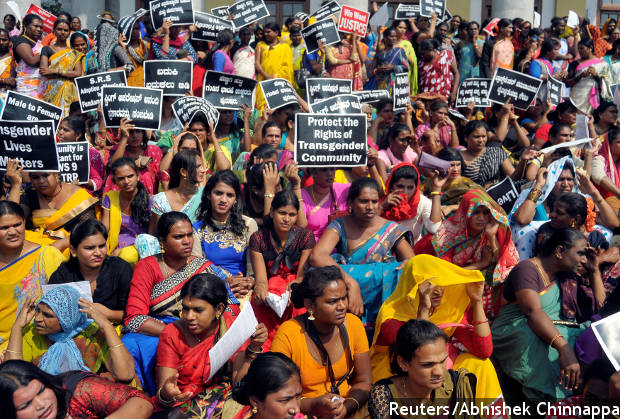 Participants hold placards during a protest demanding an end to discrimination and violence against the transgender community, in Bengaluru. Four out of 10 transgender people face sexual abuse before they turn 18, according to a new survey of 2,169 transgender respondents in three states.

From her troubled teenage years to being a social activist working for the rights of the transgender community, Sharmila (name changed to protect identity), 44, has come a long way.

But the journey has not been easy. Originally from Sri Lanka, Sharmila came to Tamil Nadu in 1977 when she was seven. She began to realise her preference to express herself as a girl when she was a kid.

As she grew out of her pre-teen years, Sharmila’s desire to emulate her sister and mother, trying on their sarees and make-up, was frowned on by her family. She was even taken to a psychiatric facility in Tiruchirapalli, a city in central Tamil Nadu, to be “treated”.

As a child who did not conform to traditional gender norms, Sharmila faced physical and emotional abuse at home and sexual abuse at school. At that age, few have the courage to speak up, said Sharmila.

The abuse begins as early as age five, but most vulnerable are those aged 11 to 15, the data show.

Many gender non-conforming children drop out of school due to harassment and discrimination.

As many as 616 respondents (28.4%) without education were more vulnerable to violence than those with an education, the data reveal.

Without education, life skills and jobs, many trans-women (men who express themselves as women) take to sex work.

In most cases, clients are the top perpetrators of physical violence and second in sexual and emotional violence.

Violence remains an all-pervasive phenomenon: Strangers, boyfriends and partners are the most frequent perpetrators of violence.

That is why activists like Sharmila stress the importance of education and jobs for transgender people to integrate them into society and make them less vulnerable to violence and discrimination.

Lack of acceptance in social as well as personal lives

Trans-women are often used by men for sex, only to be abandoned later, Sharmila said. Marriages with men tend to end in separation because of familial and societal pressures. 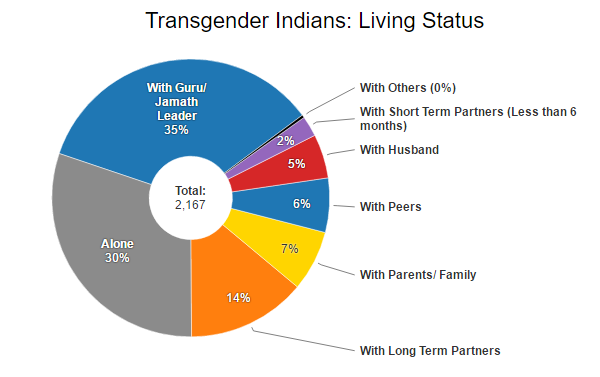 As many as 30% transgender people live alone, the survey found. No more than 7% lived with families, largely because they were not accepted or lacked support.

The jamaat (community or a cohabitating system for transgender people) formed an important support system for many.

About 35% or 751 respondents live with gurus (mentor) or jamaats.

Concerns of sexual health and individual rights are not always mutually exclusive. Sexual reassignment surgery (SRS), a surgical procedure to change genital organs from one gender to other, as an important measure for self-realisation, is one such scenario.

SRS is performed in select government facilities, free of cost, in Tamil Nadu, according to this 2010 report, Hijras/Transgender Women in India, released by UNDP (United Nations Development Programme)-India.

Since private facilities are unaffordable, the absence of affordable public-funded facilities forces many individuals to go to unqualified doctors, resulting, often, in post-operative complications, particularly urological.

Tamil Nadu has proven itself as the most transgender-friendly state in India. Besides providing free SRS, it also has a Tamil Nadu Aravanigal (Transgender) Welfare Board (TGWB), formed in April 2008, as the nodal body to address the social-protection needs of transgender people.

Registration in the government employment exchange

Within a year of TGWB’s existence, 3,887 transgender people were enumerated and 2,411 aravani (transgender) identity cards were distributed, according to this 2012 policy brief for the UNDP by Venkatesan Chakrapani, associated with the Centre for Sexuality and Health Research and Policy, an advocacy.

A lot has changed, but there is a long way to go

A path-breaking achievement in the struggle for transgender rights was a 2014 Supreme Court (SC) judgment that recognised them as the third gender.

The judgment also attributed to them socially and economically backward status, thus entitling them to reservations under the other backward classes (OBC) quota.

However, in July 2016, the SC reprimanded the Centre for failing to implement its order two years after it was passed, especially with reference to reservations in jobs and education.

Activists fighting for transgender rights have criticised the 2016 draft bill for Transgender Persons (Protection of Rights) as undermining the SC 2014 judgment.

(Chaturvedi is an independent media consultant with Swasti Health Resource Centre and a blogger at OpinionTandoor.in)