A UPA-Led Employment Guarantee Scheme Could Be Hijacked By Others 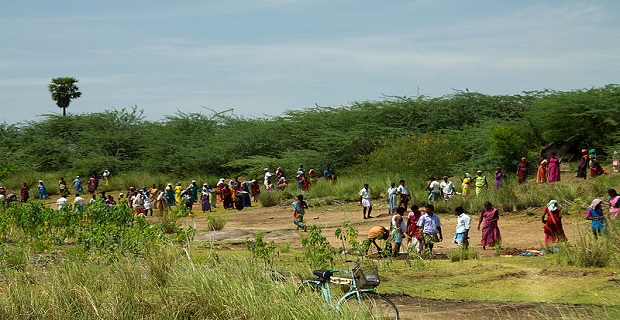 It has been argued that schemes like the right to employment are useful devices for influencing electoral outcomes, at least eventually.

The last few years have seen several such initiatives. First, the agriculture debt waiver scheme followed by the Mahatma Gandhi National Rural Employment Guarantee Act (MGNREGA) in 2009, and ahead, the National Food Security Act (NFSA) and the Land Acquisition Act.

Though it’s a little tough (at least for us) to correlate the roll-out of these schemes with electoral outcomes, it’s worth seeing how they get executed and implemented by the state Governments of different and opposing political parties to the one at the centre.

This report looks at MGNREGA, the highest funded flagship programme of the UPA Government with an allocation of Rs 33,000 crore in Budget 2013-14. The programme has already been allocated Rs 2,27,700 crore since launch in2005-06. Most of the work in MGNREGA involves renovation of water bodies, rural sanitation and drought proofing.

The effort here is to assess the total number of households provided work, fund utilisation and works executed across 9 states.The states taken are (3 each in every category) divided into Congress-ruled states, BJP-ruled states and non-Congress, non-BJP ruled states.

For starters, Congress-ruled states like Andhra Pradesh do well in fund utilisation and providing employment but Maharashtra, which is run by a Congress-led coalition, is least effective in employment generation and execution.

Do note that the quality of the employment generated, projects worked upon and their outcomes are not clear from any of these data points. And would require extensive ground surveys to corroborate.

Now, among the BJP-ruled states, only Chhattisgarh has a strong work execution rate. On the other hand, non-Congress, non-BJP states like Tamil Nadu and West Bengal are implementing the programme effectively.

If you look at the average number of households provided employment during the period 2010-11 to 2013-14, Tamil Nadu, ruled alternatively by DMK and AIADMK, did the best while Maharashtra performed the worst.

So, how do the states perform in work execution?

West Bengal has seen 42% projects being completed followed by Chhattisgarh (40%) and Tamil Nadu (33%). However, the rate of work execution among the top few states is not high.

Incidentally, the lowest reported performance is Maharashtra (13%) followed by Rajasthan and Andhra Pradesh. The all-India average of work completion stands at only 28%.

Andhra Pradesh had the highest fund utilisation (118%) followed by West Bengal and Odisha.

It can be seen that states ruled by non-Congress, non-BJP parties are doing well. Surprisingly, all BJP-ruled states have the lowest fund utilisation, far lower than the national average. Gujarat and Madhya Pradesh both had 66% fund utilisation while Chhattisgarh utilised 67% of its central funds.

The analysis shows that non-Congress, non-BJP ruled states like Tamil Nadu and West Bengal figure prominently among the states that are implementing MGNREGA in an effective manner.

We also looked at the 2012-13 data for Uttar Pradesh, another non-Congress, non-BJP state, which did well in expenditure (85%) and households employed (4.8 million). Even Bihar has better expenditure than Congress-BJP states. However, both UP and Bihar have low work execution rate of 22% and 13%, respectively.

MGNREGA is a decentralised programme executed by the states. Studies indicate that rural people are sometimes not even aware that it is a ‘Congress-led’ programme, thus subjecting the scheme to ‘local capture’.

Whether local Congress leaders implement it better or leaders of other parties utilise the scheme more needs further research. And to what extent these schemes influence electoral outcomes is a matter of some, if not deeper study.