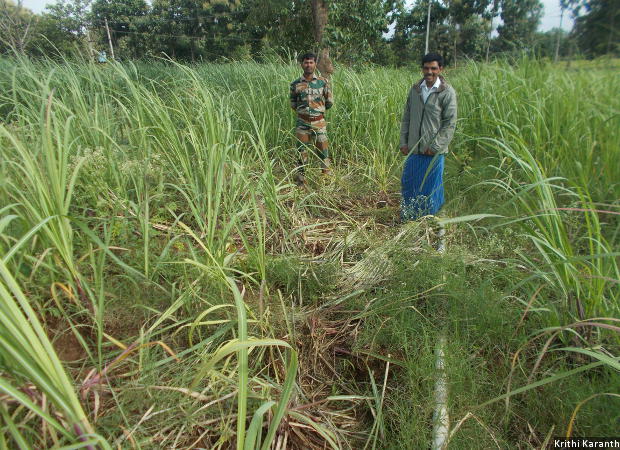 Farmer Shiva Murthy, whose sugarcane crop was trampled by elephants in July 2016--the fifth such pachyderm raid over the past year--used Wild Seve’s toll-free number for assistance. Field agent Mahadevaswamy informed and brought along a forest official to validate and document Murthy's claim for compensation. The procedure for application, which once took up to 15 days--if farmers bothered to apply at all--now takes as little as four days.

Bandipur National Park (Karnataka): For someone whose cow—valued at Rs 20,000—was killed by a tiger in August 2015, Mahadeva Gowda is calm, as is Shiva Murthy, whose sugarcane crop was trampled by elephants in July 2016, the fifth such pachyderm raid over the past year.

Gowda and Murthy are the latest beneficiaries of a new programme called Wild Seve, or wild service, which deploys specially trained locals called “field agents” who hand-hold villagers to navigate formidable government compensation procedures. What once took up to 15 days—if farmers bothered to apply at all—now takes as little as four days.

In doing so, Wild Seve—run by the Wildlife Conservation Society (WCS), a nonprofit that works with the government’s forest departments in 284 villages in Karnataka—helps soothe the tension and violence evident between India’s rising human population and falling population of wild animals.

“Earlier it was difficult to interact with villagers when there was wildlife conflict, as they used to get aggressive. From the time Wild Seve started, it has educated them about the importance of wildlife and sustainability," said a forest official, who asked not to be named, as he is not authorised to talk to the media. "It has brought a sense of calmness in villagers while dealing with our department.”

In Murthy’s village of Chillakahalli and Gowda’s Vadeyannapura on the bucolic outskirts of south Karnataka’s largest national park—as on populated forest fringes nationwide—human-animal conflicts are a growing issue, as IndiaSpend reported in May 2014.

Gowda received Rs 9,000 as compensation for his cow, but he is satisfied. “Previously, we had to pay money to get compensation,” he said. “First, we had to hire a photographer to take photos of crop raids or cattle kills. Then we had to travel by bus to the forest department, and there was no guarantee we would find them (officials).” 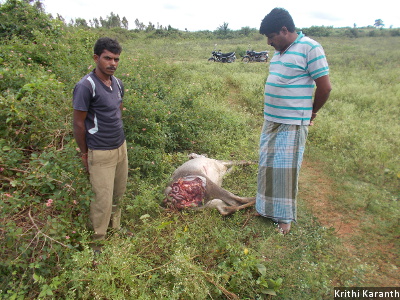 Farmer Mahadeva Gowda is seen standing next to the carcass of his cow, which was killed by a tiger in August 2015. Gowda is a beneficiary of a new programme called Wild Seve, or wild service, which deploys specially trained locals called “field agents” who hand-hold villagers to navigate formidable government compensation procedures.

Murthy used Wild Seve’s toll-free number when elephants destroyed his sugarcane crop. Field agent Mahadevaswamy—who also attended to Gowda’s call—informed and brought along a forest official to validate and document the claim. Photos must be taken and official documents filled, all of which are handled by field agents.

Mahadevaswamy said he gets a call a day—if not more—for crop raids and more occasional cattle or poultry kills. His jurisdiction extends to 70 villages within a 20-km radius of Bandipur’s forests, and he attends to a call within eight hours of receiving it.

Since its launch last year, Wild Seve’s team of seven field agents has helped file claims for 3,261 incidents of crop and property damage by elephants and other herbivores, 148 cases of livestock predation by big cats and wild dogs, 11 cases of injury and two human deaths.

Of these, 2,998 toll-free calls came from Bandipur and 422 from Nagarahole. Until July 2016, nearly 1,000 families have either received or are about to receive compensation.

The hope is that as villagers receive compensation for their losses quickly and clearly, they will be more willing to live with wildlife. “The compensation is now coming in good time, and so it has built a sense of relief and confidence in us," Gowda said. "Even if the crop is raided several times, we believe it will be compensated.”

In the absence of easy compensation, many species are attacked. There have been reports of villagers retaliating by poisoning tigers or forcing the government to shoot big cats.

In 2014, conservation scientist Krithi Karanth found that between 74% and 86% of households around five areas in Karnataka (Nagarhole, Bandipur, Dandeli, B R Hills, Bhadra) and one each in Madhya Pradesh (Kanha National Park) and Rajasthan (Ranthambore National Park) reported conflicts with wildlife. Her previous research found that less than a third of villagers who lost crops, livestock, property and family to such conflict received government compensation.

“Along with mitigation, compensation has a role to play, as conflict will continue to occur," said Karanth. "My research showed that although people were trying multiple mitigation measures--fences, guarding fields, noise (firecrackers or drums)--very few measures worked. Hence, the solutions have to include both pre- and post-conflict assistance to people.”

Using her data and research, Karanth, in July 2015, in collaboration with the WCS, launched Wild Seve, now running in 284 villages around Bandipur.

Wild Seve is challenging because compensation procedures vary across forest ranges in Bandipur. Some require a certificate from a veterinarian, confirming that cattle were indeed killed by wild animals. Others ask for proof of land ownership.

Recently, Wild Seve distributed identity cards with unique identification numbers to villagers who face repeated wildlife conflicts. Every conflict is now recorded against this number, building a conflict database, which allows easy tracking and follow-up of the compensation processes. 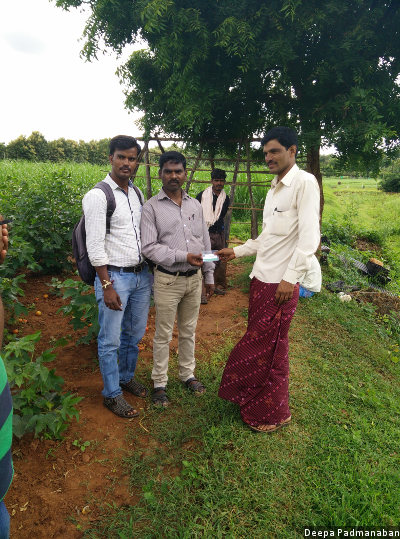 “Basically, Wild Seve has helped in simplifying the logistics and cutting down bureaucracy,” said Ghanshyam Iyer, project coordinator of Wild Seve and a WCS member.

Back in Chillakahalli village, near gently swaying saplings of sugarcane and cotton, women chat as they harvest tomatoes, aware that they share space with tigers, leopards, wild dogs and elephants and that, at some time, damage from visiting animals might set off a burdensome compensation process.

As Gowda said, “Now, all it takes is one phone call.”

Correction: The story has been updated to reflect that Wild Seve works only in Karnataka, and not in Tamil Nadu as mentioned earlier.

(Padmanaban is a Bangalore-based journalist who reports on environment and energy.)