A No-Brainer: Subsidies Or Human Development? 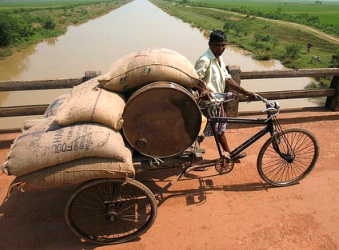 How can the Government, led by Prime Minister Narendra Modi, save over Rs 75,000 crore every year? Simple: use technology and rationalise subsidies.

Economist Ajay Shah argued in his blog: “Aadhaar (unique identity being issued to every citizen by the Government) is the big idea around which we can take a stab at reduction in Government expenditure. The low hanging fruit from Aadhaar adoption in the implementation of subsidies works out to around Rs 75,000 crore a year. This is big enough to move the needle in a way that tinkering at the margins is not.”

Shah goes to say that only big bang reforms can make any difference to the economic well being of the country. “We need to think big and implement new systems. The centrepiece of our journey is implementing five big transformational projects: Aadhaar, the Goods and Services Tax (GST), the Indian Financial Code, the Direct Taxes Code (DTC), and the Delhi-Mumbai Industrial Corridor. These are the five initiatives where the analysis and thinking is complete, and we’re ripe for execution. They are big enough to move the needle for the Republic. “

The Government spends over Rs 2 lakh crore as subsidy every year, and Finance Minister Arun Jaitely is talking about rationalising subsidies so that the beneficiaries are the most vulnerable sections of the society.

India’s biggest strength is reportedly its demographic dividend, and it is desirable to make that dividend self-reliant through better education and health as a long-term objective. India has 1.2 billion people - in simple terms, it means we have more hands to work. Also, about half of India’s population is below 25 years of age. With this profile of the population, India needs to focus on utilising it as a workforce and not spending merely to provide for its basic needs.

IndiaSpend decided to compare how much the Government is spending on subsidies and how much on human development schemes. We have looked at the ministries with the highest share of budgetary allocations in some of our earlier reports. The total subsidy bill is expected to be over Rs 2.03 lakh crore during the 2014-15 financial year, a decline of 2% from Rs 2.06 lakh crore in 2013-14.

The major subsidies in India are in the form of food, fertiliser and fuel. And the key ministries administering them are the Ministry of Consumer Affairs, Food and Public Distribution, Ministry of Petroleum and Natural Gas and Ministry of Chemicals and Fertilizers.

Food subsidy has been on the rise because of the National Food Security Act, 2013 that was brought about as a remedy for fighting the rampant malnutrition caused due to poverty. While experts are also pointing out at sanitation as a cause for malnourishment, the Government policy towards the problem is focused largely on food subsidy.

According to estimates, the National Food Subsidy Act, which is still under implementation, can provide grains to about 834 million people or about 67% of India’s population. It is the largest food security programme in the world with an allocation of Rs 115,000 crore ($19 billion). The Government will be spending around Rs 1,379 ($22 approximately) per person in this financial year.

A close comparison can be drawn with the cash transfer scheme in Brazil’s Zero Hunger Programme where the Government paid $82 a month to poor families and also enrolled these families in health and child development programmes.

If we look at farm subsidies or agriculture subsidies, agricultural subsidies have been on a decline, comparatively, in the developed world. US spent $19 billion and EU (combined) $67 billion. Brazil’s subsidy, on the other hand, has risen by three times to $10 billion, according to a Guardian report comparing the subsidies.

Fuel subsidy is based on the refinery gate price (RGP) effective 1st July, 2014. The Government is providing a total subsidy of Rs 3.40/litre on diesel (for retail consumers), Rs 33.89/litre on PDS kerosene and Rs 471.75/ cylinder (14.2 kg) on domestic LPG cylinders. However, the Government bill on fuel subsidies has gone down by over Rs 22,000 crore since the last fiscal.

Viral Shah, an expert who has worked with the Unique Identity Authority of India (UIDAI) that issues Aadhaar cards, says: “The expected savings from initiatives like Aadhaar-linking and administering these subsidies directly into the bank accounts of the beneficiaries can be on the order of Rs 20,000 crore."

Fertilisers are subsidised under the Nutrient Based Subsidy (NBS) scheme. Prices for the fertilisers vary according to nutrient (Nitrogen, phosphorus, potassium or sulphur) content in them.

Viral Shah says: “While 120 million consumers benefit from LPG subsidy, there are about 100 million farmers who benefit from subsidised fertilisers. The subsidy on fertilisers has cost us close to Rs 1,00,000 crore in 2013-14. India has the largest subsidy in place worldwide, which leads to overuse of urea that decreases soil quality, and far too much control in the manufacturing and distribution that leads to perennial shortages and rampant black marketing. The savings in the problem of fertiliser subsidy can be conservatively estimated at Rs 20,000 crore per year."

Let us now look at the how much the human development projects cost the exchequer:

The Ministry of Rural Development is responsible for poverty eradication programmes like the National Rural Livelihoods Mission, which trains youth for employment and Mahatma Gandhi National Rural Employment Guarantee Scheme (MGNREGA) that ensures jobs for 100 days every year. In the year 2013-14, out of 8.28 million people who demanded work under MGNREGA , 8.26 million benefitted from the scheme.

According to Government data, 107 million children benefit from the mid-day meal scheme in 1.2 million schools every day. While Sarva Shiksha Abhiyan (SSA) aims at universal education, we have seen poor enrolment in schools and lack of staff and infrastructure as per IndiaSpend’s earlier reports.

According to a latest United Nations International Children's Emergency Fund (UNICEF) report, there are over 190 million children in the age group of 6-13 years in India and out of these 8 million are not in schools.

National Health Mission (NHM), India’s largest public health programme, fails to meet basic needs due to low budgetary allocation given the vastness of population and needs. Amarjeet Sinha, principle secretary (social welfare), Government of Bihar, in an article published in the Indian Express, said: “Financing critical sectors like education, health, nutrition, water and sanitation has to follow a long-term plan and must not be ad-hoc. There must be well worked out outcomes and time frames for human development indicators with appropriate backing of financial resources. India can do without a regime of subsidies, tax holidays and other concessions but it cannot do without satisfactory levels of public spending on human development.”

The share of subsidies is definitely larger in India than social welfare programmes, from the perspective of spending. And it is no news that the country is caught in a vicious circle. But, the Government must aim at reducing subsidies and investing more in human development if we want to harness our demographic dividend.