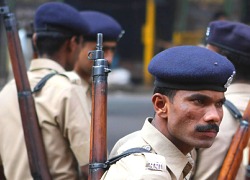 Is the long arm of the law long enough to guard its own backyard? Evidently not.

Data released by the Bureau of Police Research and Development shows that a total of 3,045 firearms have been stolen from police stations across the country from 2003 to 2011 (the report doesn’t specify whether these are solely police-owned guns or also includes guns confiscated by the police).

Figure 1 shows the number of firearms stolen over the years. During 2011, about 109 were stolen from police stations. While the figure is below the previous year’s figure of 665, the thefts, for their sheer audaciousness, are worrying. 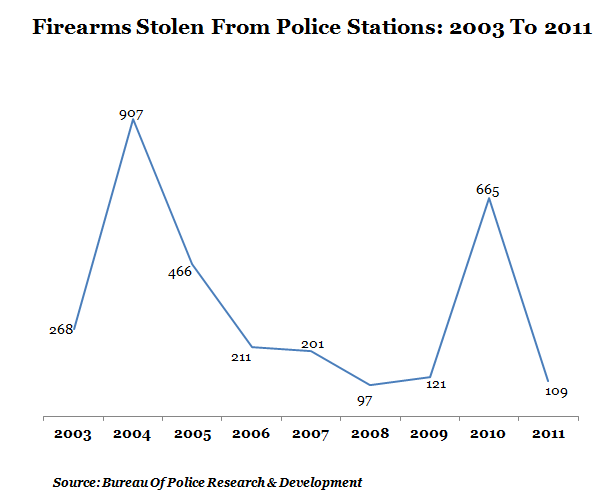 The following year, however, the Orissa police managed to clamp down on thefts resulting in only 8 firearms being stolen that year. Jharkhand, however, saw an increase in thefts with 237 firearms being stolen. Turns out that over the next 4 years, the Central Government did not receive any data from Jharkhand on theft of firearms.

The next spike in thefts came along in the year 2010 with 665 firearms being stolen. The spike was led by Jharkhand where 480 firearms were lifted from police stations that year. It was also the first time Jharkhand reported any figures to the Government since 2005.

All the states with the exception of Bihar handed their data on police to the centre; research shows that Bihar has given data on firearms to the centre only once since 2003.

Now, let’s take a look at the states which had firearms stolen during 2011: 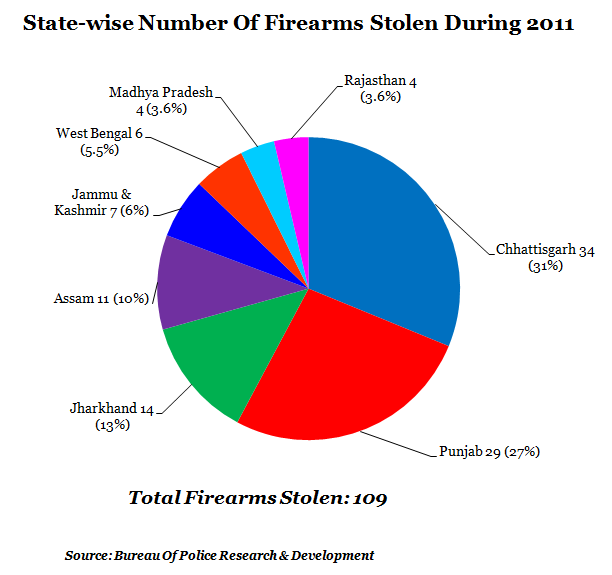 Chhattisgarh, Punjab, Jharkhand and Assam together accounted for 88 (or 80.7%) of the total 109 firearms stolen from the police.

Reports suggest that arms looting happens more in extremist-affected areas. The aim of extremists/terrorists attacking the police force is not only to loot arms for their own use but to also demoralise the force.

The Central and State Governments have started taking steps to curb the looting of firearms with better security arrangements for field police units and better training of police personnel to handle such situations effectively.

The data seems to suggest the effort is paying off. However, it must be noted that that there have been two huge spikes since 2003, and also states like Bihar, Jharkhand, Maharashtra, Gujarat, Andhra Pradesh, Rajasthan and Jammu & Kashmir haven’t always reported their data to the Centre during this period.

Of course one does wonder who the cops call when stuff gets stolen from police stations under their watch.