A Million Road Deaths In A Decade & Climbing 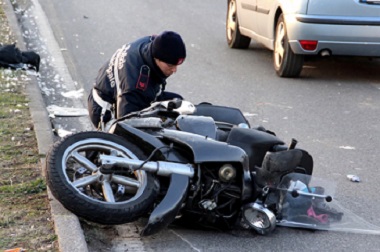 Forty five people died in a horrifying road accident last week in Andhra Pradesh after a bus caught fire charring all the passengers inside. The accident once again highlighted the dangerous state of Indian roads.

Here’s a look at some broad numbers. A total of over 1.2 million Indians have died due to road accidents across the country over the last decade. That’s an average of 120,00o lives every year or nearly 14 lives an hour !

Data released by National Crime Records Bureau (NCRB) under the Home Ministry finds that road accidents continued to be a big killer in India. Road accidents accounted for over 37% (139,091) deaths in 2012 - an increase from 82,262 in 2001, accounting for 35% of deaths in that year. 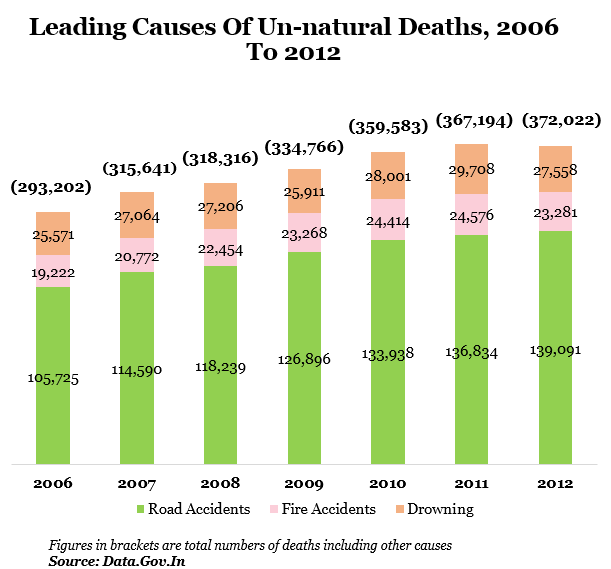 Railway accidents, influence of alcohol, snake/animal bite, electrocution and fall from heights continue to be some other key reasons for unnatural deaths across the country.

According to World Health Organisation’s Global Status Report 2013, 1.24 million people die each year on the world’s roads. And India accounts for about 10% of road crash fatalities worldwide. The death rate per 100,000 population for road accidents in 2010 for India is estimated at 18.9, better when compared to 20.5 for China but worse than Pakistan (17.4), Bangladesh (11.6) and Nepal (16).

Respect for law or the lack is a key reason. IndiaSpend earlier reported on how drunk driving cases are reported even from ‘dry’ states like Gujarat. We also reported how the most dangerous roads in the country are in Ludhiana.

Piyush Tewari, founder, SaveLIFE Foundation, an NGO based in New Delhi that trains volunteers to help accident victims, says the change has to start..well from the start:

“We should follow the World Health Organisation (WHO) usage of crash instead of accident. Accidents cannot be prevented while crashes can definitely be prevented,” says Tewari.

Listing out the primary reasons for so many accident fatalities in India, Tewari says the broad reasons include bad road behaviour, lack of or weak enforcement of laws, bad road/vehicle engineering that leads to road user conflict (for e.g. left-most lane is reserved for buses and that’s the lane used by cyclists....the biggest vehicle and the smallest one jostle for space...) and lack of post trauma care.

“A study by an orthopaedics association in 2006 found that at least 50% of lives i.e. 70,000 per year can be saved if accident victims are given proper post trauma care,” Tewari says.

Tewari also highlights the fact that various departments involved in roads, accidents and care operate in silos and there is no effective leadership to co-ordinate the efforts to save lives. “Over the last 10 years, 1 million Indians have died due to road accidents. And policy makers are still not able to or are not ready to accept the gravity of the situation.”

He feels India needs a comprehensive Road Safety Act along with a national agency for co-ordination with all the requisite powers. “It is time for us to follow the UN standards for vehicle manufacturing and road building, and time to adopt safe systems approach to protect lives,” he says.

The Ministry of Road Transport has initiated a National Road Safety Policy to reduce mortality and morbidity resulting from road accidents. The Government is now focussed on 4 Es – Education, Enforcement, Engineering (roads as well as vehicles) and emergency care – to bring down mortality due to road accidents.

SaveLife’s Tiwari’s is hopeful that the initiatives of some states like Andhra Pradesh, which has overhauled its licensing system and Tamil Nadu, which has implemented a comprehensive Road Accident Data Management System, will lead to better understanding and thus management of the issue.

Editor: There was an error in the original article. We had incorrectly said there were 14 lives being lost every day while it is actually every hour. That takes total deaths per day to 330. The figures on total road deaths are accurate. Thank you Anjali Mahendra for pointing this out.