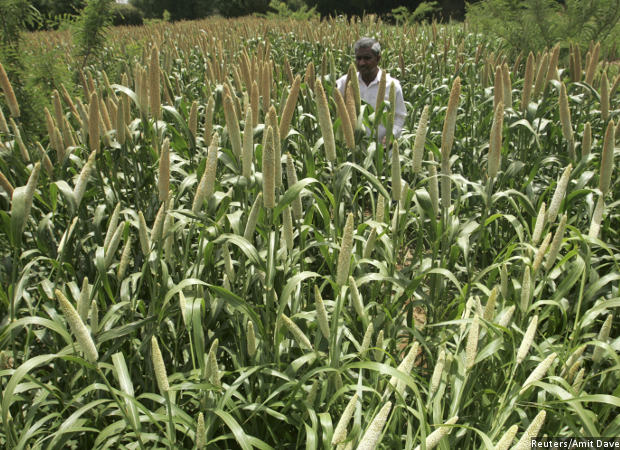 A farmer checks millet crops in his field on the outskirts of the western Indian city of Ahmedabad. In the 1960s, the average annual per capita consumption of sorghum and millets was 32.9 kg, roughly eight times the 4.2 kg an urban Indian consumed in 2010.

Of late, I’ve gone retro in my choice of cereal, preferring sorghum and a variety of millets over wheat and rice, staples I’ve grown up eating. In the 1960s, the average annual per capita consumption of sorghum and millets was 32.9 kg, roughly eight times the 4.2 kg an urban Indian consumed in 2010.

If this area dwindles further, India stands to lose:

If this trend can be reversed, a diverse range of problems related to malnutrition, farming and water use could be addressed.

Through the 1970s and 1980s, as the Indian taste for cereal tilted towards wheat, farmer Ramanjaneyulu of Kogira village of Andhra Pradesh's south-western district of Ananthapuramu, switched to growing only groundnut instead of a mix of pulses, millets and oil seeds.

So strong was the influence of government policies pushing the cultivation of oilseeds to enhance India’s edible oil production that by 1990, 90% of the district’s farmers had changed over, making Ananthapuramu India’s top groundnut growing district by area, said Choitresh Kumar Ganguly, co-founder, Timbaktu Collective, a nonprofit that hopes to revive Ananthapuramu’s agrarian economy.

For perspective, Ananthapuramu had 8.70 lakh hectares under groundnut in 2009, roughly half of Andhra Pradesh’s 17.66 lakh hectares growing the oil seed. By then, the switch had cost Ramanjaneyulu. 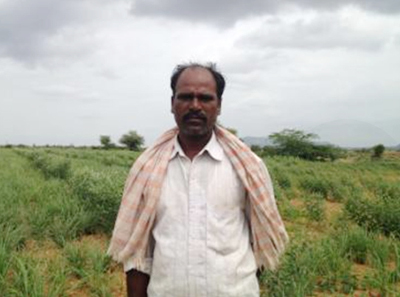 Ramanjaneyulu, a farmer from Kogira village of Andhra Pradesh's south-western district of Ananthapuramu, faced falling yields and losses after adopting groundnut cultivation in the 1970s. For centuries, his family had grown a mix of pulses, millets and oil seeds--for sale and self-consumption. Since reverting to his old cropping patterns in 2012, his gross profit has grown and his family has started to eat millets again, which is important to them. Across India, a reversal in dietary preferences towards millets and sorghum, would help boost livelihoods of smallholder farmers like Ramanjaneyulu.

A hectare in Ananthapuramu yielded about 115 kg of groundnut in 2009, the lowest yield in 13 years, less than a fifth of the district’s 657-kg per hectare average of the previous 12 years.

One reason for Ananthapuramu’s low yield is its rain-fed agricultural land, as opposed to irrigated land. “But the two kinds of land can’t really be compared,” said Ganguly, “and rain-fed Ananthapuramu happens to be India’s second most drought-afflicted district.” He cited the poor health of local soil as the leading reason for falling yields, a conclusion Ramanjaneyulu agreed with for these reasons:

“In 2012, we decided to stop cultivating groundnut and reverted to organic methods of agriculture and traditional cropping patterns,” said Ramanjaneyulu, now an ardent advocate of organic farming and a member of Dharani, a farming and marketing cooperative promoted by the Timbaktu Collective.

Foxtail millet, Ramanjaneyulu’s first crop after many years of groundnut mono-cropping, yielded a gross profit of 81%, a third higher than the 61% profit groundnut yielded in 2011. Since then, his income has steadily grown.

When Ramanjaneyulu grew only groundnut, his family subsisted on rice availed through the public distribution system (PDS)—wheat is rarely eaten in those parts. Now that he has reverted to growing millet, his family gets to eat it too. More Indians should eat sorghum and millets, if the country's continuing malnutrition challenge is to be addressed:

Girls fed a diet composed of sorghum (60%) and rice (40%) recorded a high growth rate than those fed just rice, according to this 2015 study by the Indian Institute of Millets Research and the National Institute of Nutrition, Hyderabad.

“Innovative preparations” of sorghum, such as upma, flakes, pasta and biscuits, had 5% to 35% lower glycaemic index than wheat in another study, which showed they help decrease postprandial blood glucose levels and reduce the risk of diabetes, said Rao.

The challenge is getting Indians, especially urban Indians, to revert to millets when the government has been promoting the consumption of wheat and rice for decades, especially as subsidised food for the poor through the public distribution system (PDS).

“Prior to the enactment of the National Food Security Bill in 2013, the government had included only wheat and rice in the PDS, which helped lower the consumption of coarse grains,” said Muniappan Karthikeyan, program leader with the DHAN Foundation, an NGO.

In 2014, IndiaSpend reported how the National Food Security Mission had been extended to include coarse grains, such as millets, at Rs 1 per kg through the PDS.

But Karnataka, where the PDS sells finger millet in the south and sorghum in the north, is one few states to have taken the Food Security Act seriously, said Karthikeyan.

Raising the procurement price for finger millet—from about Rs 1,300-1,400 per quintal four-to-five years ago to Rs 1,750-1,800 per quintal now, and Rs 2,000 per quintal for higher grades—has encouraged farmers to make large sales to government procurement centres. “It would do well if other states follow suit,” said Karthikeyan.

PDSs that use micronutrient-rich foods are more nutritious than ones that do not, IndiaSpend reported in July 2016.

Shivananje Gowda, 58, a farmer in Kodihalli, a village in Karnataka's southern district of Ramanagara, is a veteran of mixed cropping: For every two lines of millet on his 4.16 acres, he plants a line of pulses. After harvesting the crops in about 90 days, he keeps the land idle for a few months so the soil can recover. He stores about 20 bags of millet for his family’s annual consumption and sells the rest.

A couple of showers were enough to get Gowda tilling his rain-fed land because finger millet is a hardy crop that needs less water than most crops, said Bharati Hegde, project executive with the DHAN Foundation, Kodihalli. “One tanker is sufficient for an acre of finger millet,” said Hegde.

“Indian food was never about just wheat and rice. But the green revolution made it so,” Anshuman Das, programme manager with the sustainable integrated farming systems programme at the South Asia office of Welthungerhilfe, a German non-profit, wrote in this 2014 report.

This policy has made food supply more fragile—“more so if you consider that 40% of the national food supply comes from rain-fed land, comprising 60% of the total cultivated land”, said Karthikeyan.

Millet productivity can be increased. Gowda gets 12 bags of millet per acre, without using organic-farming methods. Some farmers who do in Karnataka get 60 bags per acre.

Karthikeyan and his team are helping farmers like Gowda switch to sustainable agricultural methods. He cited a study that shows poor farmers are more likely to hold rain-fed areas, which are 30% less productive than irrigated areas. Even a 1% productivity increase could reduce poverty by 0.65%, according to this 2011 National Centre for Agricultural Economics and Policy Research report.