A 30-Day Shutdown In India = 31% Reduction In Fiscal Deficit! 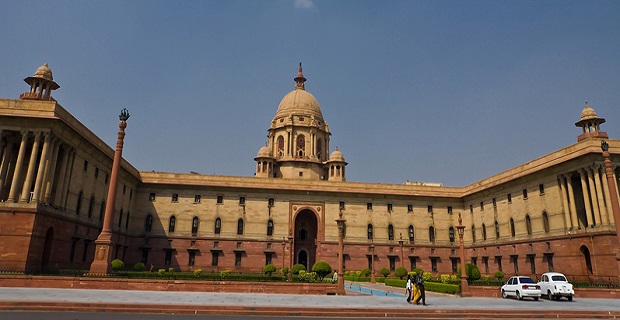 India’s latest monthly finances statement doesn’t look pretty. Fiscal deficit for the first 5 months of the current financial year is already at 75% of the total budgeted amount. If this trend continues into the rest of the year, we are looking at a fiscal deficit that is almost double of that estimated in Budget 2013-14.

For a country that has waged a long battle against inflation, often at the cost of economic growth, and continues to do so, this does not augur well. High inflation keeps interest rates propped up. While a high government deficit means more borrowing, which also exerts upward pressure on interest rates, besides being inflationary.

While the Government will likely resort to expenditure trimming in the next few months, the US Government has an unintentional and definitely not the most desirable, but an out-of-the-box solution to the problem.

The US Government, as you might have read or heard, has actually started shutting itself down, failing resolution on the budget for the financial year starting October 1, 2013.

A shutdown of the US Government means that all but the most essential services will be stopped till the impasse is resolved. These essential services cover defence services and social security. The services that will be affected include (data geeks, analysts do note) updates on crucial macro-data like payroll numbers.

A US Government shutdown will, of course, have multiple ripple effects for the economy stemming from the decline in expenditure, which will ultimately impact growth in the economy, depending on how long the shutdown lasts.

According to estimates by research firm IHS, quoted by a BBC report, the US Government shutdown will cost it around $300 million per day. The same report also points out to a Goldman Sachs estimate of a 0.9% reduction in GDP in this quarter on account of a shutdown.

However, not all impacts of a Government shutdown are negative. The fiscal deficit, for instance, will be positively impacted even if it is not the most desirable manner of achieving a reduction in deficit.

Now let’s ask that somewhat academic but statistically interesting & fun question: What if the Government of India actually shut down for a period of time? Will our fiscal deficit woes be resolved?

The US Government has shut down twice, once for six days in 1995 and then for 21 days in 1996. Based on this information, we build four scenarios for an Indian Government shutdown – a shutdown of one day (the minimum), six days, 20 and 30 days (an entire working month).

In the real world, there is a chance that some expenditure will have to be incurred at a later date (like interest payments) even if they get postponed in the event of a shutdown. Remember, once again, this is a statistical exercise that is only going with some (albeit correct) base assumptions. Presumably many of us don’t want to imagine the real thing.

Now, our estimations show there can actually be dramatic results from a shutting down of the Government. The longer the period of shutdown, the deeper the impact.

A 30-day or one month shutdown at the centre would result in as much as a 31% reduction of fiscal deficit from the amount estimated in the budget of 2013-14, with a 10% decrease in expenditure. 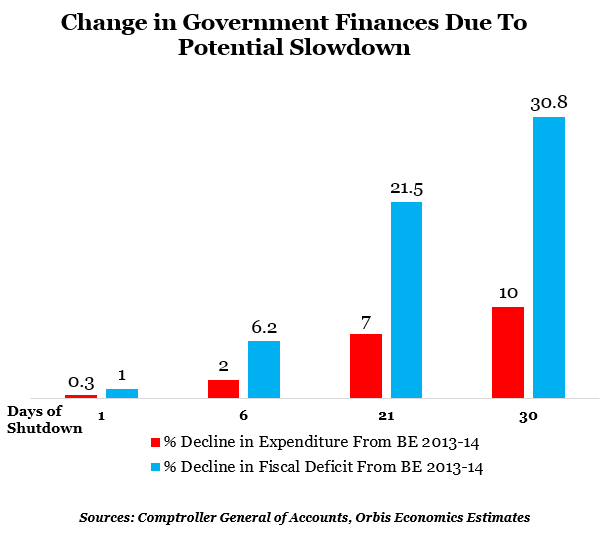 Of course these estimates are indicative since the proposition itself is theoretical. Though the greater the detail we go into, the more precise the estimates could get. Also we have considered only the first round impact of a potential shutdown on the economy; namely, the impact on expenditure and through that on fiscal deficit.

In actual fact, though, there would be a second round impact of a shutdown. This is because limited Government expenditure impacts earnings of the individuals employed by the Government. This, in turn, will potentially impact the demand for goods and services in the economy in a negative way as well and thus depress overall GDP growth.

The actual, second round impact will depend on the multiplier effect of Government spending on the economy as well as the length of time for which such a shutdown takes place.

In order to arrive at the estimates for saving in expenditure over the 3 time periods under consideration we first estimated two figures:

Central Govt expenditure, ex-essential services: We worked with Budget Estimates of 2013-14. In the context of the US, essential expenditure is that on social security and defence services. We used this description in the Indian context on the basis of heads that explicitly cover these expenditures.

We subtract the cutback from total expenditure budgeted for the year to assess the (i) actual decrease in expenditure and (ii) the impact on fiscal deficit. From here, we can determine the percentage impact as compared with the budget estimates.