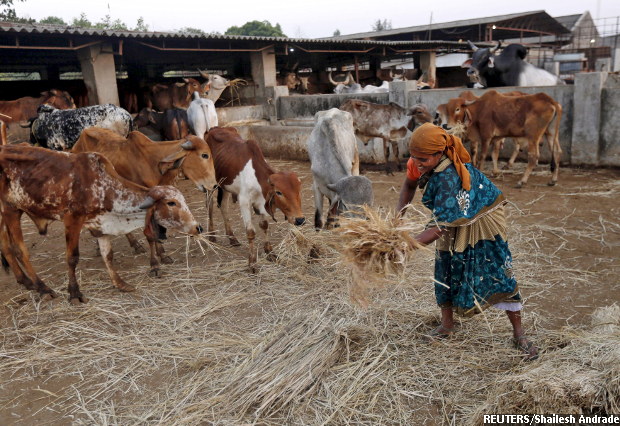 A woman spreads out fodder for rescued cattle at a "goushala", or a cow shelter, run by Bharatiya Gou Rakshan Parishad, an arm of Hindu nationalist group Vishwa Hindu Parishad (VHP), at Aangaon village in the western state of Maharashtra, India, in this February 20, 2015 file photo.

On March 31, 2017, the Gujarat state assembly amended the state’s cow protection laws to extend the maximum sentence for cow slaughter from seven years to a life term and a fine of up to Rs 5 lakh. The amendment made offences under the Gujarat Animal Preservation Act of 1954, which criminalises cow slaughter as well as transportation of cows for slaughter and possession of beef, non-bailable.

After these amendments, Gujarat holds the mantle of the state with the strictest laws in the country to protect cows, bullocks, bulls and their progeny.

In an analysis of cow protection laws across the country, IndiaSpend found that:

Cow protection has a long history in Indian politics, dating back to pre-Independence times when it found support from mass organisations such as the Arya Samaj and a personage no less than Mohandas Karamchand Gandhi.

1950-1968: Post-Independence and after India became a republic in 1950, cow protection enthusiasts were reigned in and a ban on cow slaughter was only included as a Directive Principle of State Policy, and not as a fundamental right as its supporters had demanded. Nevertheless, Congress governments enacted laws prohibiting cow slaughter in 15 states and UTs, until just before the 1969 Congress party split. The offence was made punishable with a prison term ranging from six months to two years. Madhya Pradesh, with a prison term of three years and a fine of Rs 5,000, had the strictest law of its time, after J&K.

1977-1979: After a gap of eight years, the enactment of cow protection laws saw a resurgence when the Janata Party, with its Hindu nationalist elements from the Bharatiya Jana Sangh (which later formed the BJP), came to power in 1977 and served a two-year tenure at the country’s helm. Laws came into force in the UTs of Goa and Daman & Diu and the state of Himachal Pradesh under a Janata Party government and Andhra Pradesh under Congress rule. Maharashtra, also under a Congress government, strengthened its cow protection law, replacing the Bombay Animal Preservation Act 1954 in force till then.

1994 to present: Coinciding with a spike in communal conflict across the country in the early 1990s, the promulgation of cow protection laws restarted in 1994, with the introduction of the Delhi Agricultural Cattle Preservation Act. The law made cow slaughter punishable with a five-year prison term and a fine of Rs 10,000--the strictest of its time after J&K. Since then, cow protection laws have been enacted and amended in 11 states and UTs, prescribing stricter punishment in 10 of these barring Sikkim (where restrictions and punishment are among the mildest). Nine of these states were ruled by the BJP at the time of enactment or amendment.

In 12 states, cow slaughter can lead to a prison term ranging from two to 14 years

Prior to Gujarat’s recent amendment, the Muslim-dominated state of J&K had the most stringent punishment for cow slaughter. The law was instituted in 1932 under the Ranbir Penal Code, the code introduced during the reign of the Dogra ruler Ranbir Singh, which still applies in J&K.

This law makes cow slaughter a cognisable and non-bailable offence punishable with up to 10 years’ imprisonment and a penalty of up to five times the value of the bovine killed. Cows are estimated to cost lakhs in J&K.

In terms of severity of punishment, Haryana comes in third. Enacted in 2015, the Haryana Gauvansh Sanrakshan and Gausamvardhan Act deems cow slaughter a cognisable, non-bailable offence inviting a maximum punishment of 10 years’ rigorous imprisonment and a maximum fine of Rs 1 lakh.

In Jharkhand and Uttarakhand too, cow slaughter is punishable with a maximum sentence of 10 years’ rigorous imprisonment, but a lower fine of Rs 10,000.

In contrast, restrictions on cow slaughter in Kerala and Sikkim are the mildest. In Kerala, cow slaughter is prohibited in rural areas under the Kerala Panchayat (Slaughter Houses and Meat Stalls) Rules, 1964, and in urban areas as per a 1976 government order, but is allowed if the bovine is over 10 years of age. Offenders are fined Rs 1,000. Similarly, the 2008 Sikkim Police Act prohibits cow slaughter only in public spaces and provides for a monetary penalty only for unsanitary slaughter.

The four states of Arunachal Pradesh, Meghalaya, Mizoram, and Nagaland and the UT of Lakshadweep have no laws related to cow slaughter, according to this document from the central Department of Animal Husbandry, Dairying and Fisheries (DAHD). The document notes that DAHD receives numerous representations for banning cow slaughter across the country and declaring the cow as India’s national animal.

While cow slaughter is banned in the Andaman & Nicobar Islands, Dadra & Nagar Haveli and Tripura, as mentioned in the DAHD document, there is limited information publicly available about their laws.

The law in Manipur is based on a 1936 darbar resolution proclaimed during the reign of Maharaja Churachand Singh, whose contours are therefore vague--it does not specify, for instance, if cow slaughter is a cognisable and non-bailable offence.