95% Rural Homes Use Wood, Dung For Cooking In 6 States 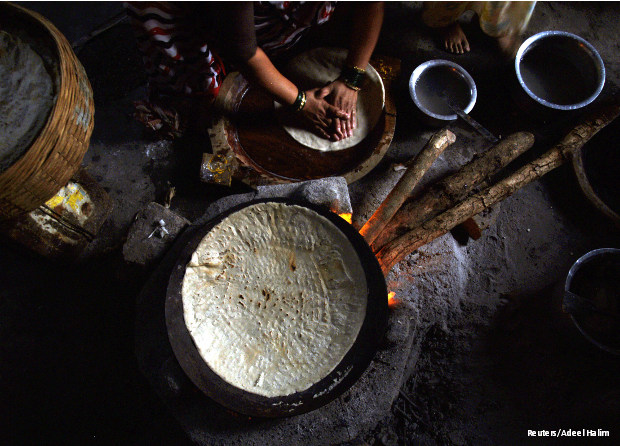 As many as 95% of rural homes across six energy-deficient states (Bihar, Jharkhand, Madhya Pradesh, Odisha, Uttar Pradesh and West Bengal) still use traditional fuel, such as firewood, dung cakes and agricultural waste for cooking, says a new report.

Only 14% households in rural areas across the six states surveyed used biogas, LPG (liquefied petroleum gas), electricity or natural gas as their primary source for cooking, according to the Access to Clean Cooking Energy and Electricity – Survey of States (ACCESS) report.

In the first part of this series, we reported the wide gap between official "electrification" and electricity connections to homes.

More than 67% of rural households in India still depend on firewood or wood chips for cooking, IndiaSpend reported previously. We also reported how lack of clean cooking energy and indoor air pollution leads to severe health issues.

About 33% of homes in Uttar Pradesh, India's most populous state, have LPG connections; 17% use it as primary energy source for cooking, but only 5% are solely dependent on it.

More than three-quarters of homes across the six states, on aggregate, are categorised in tier 0 with more than 99% in this tier completely dependent on traditional fuel.

The cooking energy index based on the framework is rated on a scale of 0 to 100, and all states fall towards the lower end of the spectrum.

Only 6% of households in Jharkhand have LPG connections; about 5% use it as primary source and just 1% solely depend on LPG.

However, the use of LPG for cooking in rural areas across India has increased from 2% to 15% of households during the period 1993-94 to 2011-12, an increase of 7.5 times, IndiaSpend reported earlier.

Cost is a major factor hindering the spread of LPG

The major factor hindering LPG use is the "high cost" of acquiring a connection, according to the study. About 95% of households say they cannot afford it.

?Based on IndiaSpend's calculations, it would cost a person in Bihar approximately 19% of his yearly income (per capita) to get LPG cylinders (assuming 9 cylinders per annum).

Households also cited other factors: monthly costs (88%), no LPG distribution in the vicinity (72%) or they just did not know of it (42%).

As many as 85% of homes in Jharkhand and Odisha said there was no LPG distributor nearby.

People in these six states also have to travel long distances to get their LPG cylinder.

In Bihar, for instance, a one-way trip to the LPG distributor is 6 km. This distance is the most for a household in Madhya Pradesh (11 km), followed by Odisha (9 km), Jharkhand (7 km), Uttar Pradesh (7 km) and West Bengal (3 km).

Only 44% of households across six states depend on free-of-cost biomass (firewood, dung-cakes, agricultural residue) for cooking. The rest either buy a part or all biomass for cooking.

About 69% of households in Odisha (the maximum among six states) are dependent entirely on free-of- cost biomass for cooking.

About 90% households using the traditional chulha (wood- or dung-fired stove) cited time consumption and difficulty to cook as inconveniences for the cooking process.

More than a third of households are unaware or do not believe that using LPG over a traditional chulha could have positive health benefits. Such lack of awareness hampers the demand for clean cooking energy in rural India, according to the study.

About 80% of households in Uttar Pradesh believe that the smoke from their chulha has adverse health impacts, and 68% believe that using LPG is better for their health than traditional chulha.

(Series concluded. You can read the first part here)