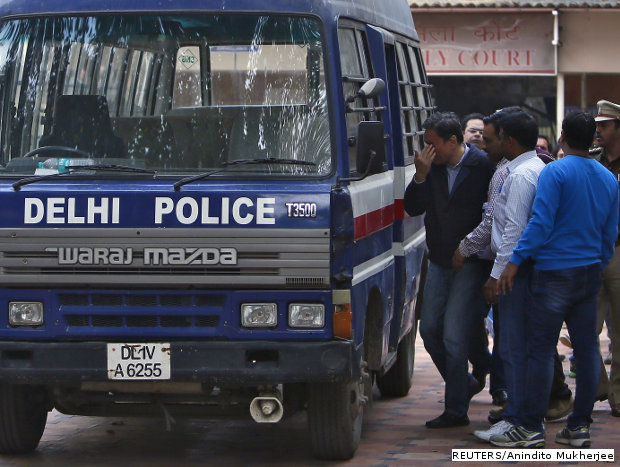 Plainclothes police escorting a person arrested in the case for stealing official documents from the oil ministry.

A recent leak of information at the petroleum ministry revealed a deep nexus between public servants and corporates, the most recent reinforcement of the view that official corruption is endemic across India.

An IndiaSpend analysis reveals that the number of senior government officials involved in public corruption cases investigated by state agencies has increased 95% over the past five years.

Source:NCRB; Note: Figures for the year 2009 are not available.

“This is bound to happen," said Jagdeep Chhokar, Founder-Trustee, Association for Democratic Reforms, an advocacy. "Our elections are fought with black money obtained through corrupt practices and political parties have huge sums of unaccounted money. The first step is to make all political parties accountable and transparent with their funding. When the basic electoral process itself is corrupt, then we cannot expect honesty within government offices.”

Apart from the involvement of corporate executives, the police arrested a former journalist and an energy consultant, both accused of leaking and selling classified documents.

There are differing views on whether the information procured by journalist Santanu Saikia was a legitimate form of journalism. Former investigative journalist Chitra Subramaniam Duella does not believe it was.

“It is not justified for journalists to pay money for leaked information," said Duella, “since it can become a business, as we saw in this case, and overall, it sets a wrong precedent for investigative journalism."

Investigative journalist Rana Ayyub agreed with that view. “There is a difference between indulging in crimes and paying your sources," said Ayyub. "If you are doing a story in a Maoist area or a conflict zone, then you might have to pay money or pay for drinks and food for your source to give you information. But the petroleum ministry incident is a case of blatant corruption. Leaking classified government document is not justified in any manner, and I do not support it in any way.”

Data reveal that the involvement of private persons in corruption cases investigated by state agencies increased 20% from 889 in 2009 to 1071 in 2013. “The reason this is happening at such a large scale is two-fold: everyone is doing it and making money on the sly, so why not," said Duella. "Secondly, nobody goes to jail in many of the cases.”

After the incident, there have been many calls to make lobbying legal in India, a view echoed by Chhokar and Duella.

“I think lobbying should be made legal, and the names of the lobbying firms registered with industry bodies, such as Associate Chambers of Commerce of India (ASSOCHAM) and Federation of Indian Chambers of Commerce and Industry (FICCI). This is done all over the world in democracies. It strengthens systems and builds in transparency and accountability.”