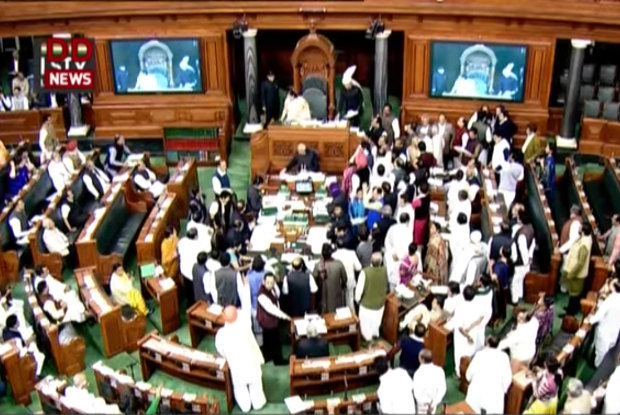 Biju Janata Dal member of Parliament (MP) Jay Panda announced that he would forgo part of his November and December salary--he did not mention how much that would be and the amount cannot be calculated now--to atone for the 92 hours lost during the current session of the Lok Sabha (Parliament’s lower house), the least productive among 10 sessions since 2014, official data show.

“I have been doing this for several years now, I think about four or five years,” Panda said on December 18, 2016. “At the end of every session, I have been returning (part of) my salary and daily allowance in the same proportion as the time that has been lost in the Lok Sabha due to disruptions.”

Panda’s gesture is a proverbial drop in the ocean.

The Indian taxpayer paid nearly Rs 177 crore in salaries and other allowances to 545 Lok Sabha MPs during the last financial year (April 2015-March 2016), according to data released to the Lok Sabha. (This is excluding travel and daily allowance in June 2015 since data are unavailable. This also does not include cabinet ministers since they are paid by the respective ministries.)

That means, a monthly expense of nearly Rs 270,000 on each Lok Sabha MP, including perks on days they attend the Lok Sabha session. MPs get a daily allowance of Rs 2,000 when Parliament is in session.

This, however, does not include other perks such as free housing, medical care and telecom facilities.

Each minute of running Parliament during sessions costs the exchequer Rs 250,000, NDTV had reported in September 2012.

Based on salaries, perks and the cost of running Parliament, about Rs 144 crore (Rs 138 crore on running the houses plus Rs 6 crore as salaries+perks paid) was lost due to disruptions during the 10th session of the current Lok Sabha, IndiaSpend calculations show.

The opposition parties were protesting the Prime Minister’s announcement on November 8, 2016, that made nearly 86% of India’s currency--by value--invalid. (Click here to read our coverage Currency Chaos)

MPs are also reimbursed for 34 flight trips and unlimited rail and road travel for the year on official business, The Hindu reported in March 2016.

The repeated disruptions and adjournments in the recently-concluded winter session (the tenth session of the 16th Lok Sabha that ran from November 16 to December 16, 2016) also drew a sharp reaction from President Pranab Mukherjee.

"For God's sake, do your job!” President Mukherjee told MPs on December 8, 2016. "You are meant to transact business in Parliament. Disruption of Parliament is not acceptable at all."

The 16th Lok Sabha, formed after the Bharatiya Janata Party (BJP)-led National Democratic Alliance came to power in May 2014, has had 10 sessions, with nearly 1,066 working hours (almost 133 days).

The 10th session also had the least sitting hours--19 hours and 26 minutes--of the current Lok Sabha yet.

If we include 245 MPs of the Rajya Sabha (upper house of Parliament), the total annual expense on salaries and perks would go up by Rs 78 crore, based on the calculations of spending by Lok Sabha MPs.

If the proposal is approved by Finance Minister Arun Jaitley, the salary and perks of MPs will double to almost Rs 280,000 per month from the current Rs 140,000 per month.