9 Of 10 Private Sector Retirees Have No Pensions, Health Insurance 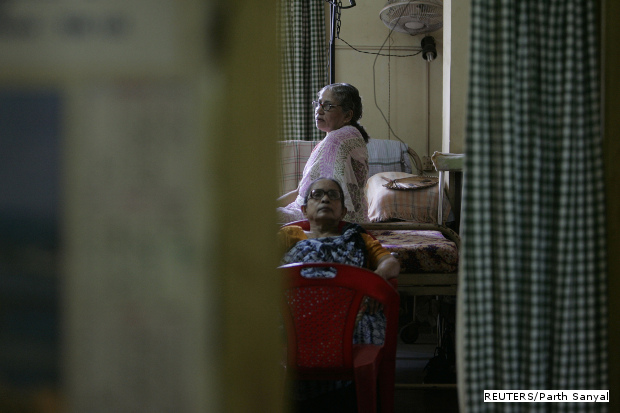 Only 8% of employees who retire from the private sector in India are covered by pensions while the remaining 92% have no income security or health insurance, according to a recent report released by Crisil, a ratings agency. Fiscally, the report adds, the government cannot afford to ensure social pensions to a large populace that is also increasing along with life expectancy.

IndiaSpend had earlier reported on demographic challenges before India - both for youth and for the elderly. We have explored how India’s ageing population is a concern for policy makers and analysed how some states in India have witnessed a fall in fertility rates, leading to a proportionately higher population of the elderly, implying an increasing burden on the working population.

We have also raised concerns about the future of the youth with low employment levels in the country. Other than better and more employment and skill development, the government also needs to focus on ensuring financial stablility for the current young generation. With falling fertility rates, old age dependency ratio will rise in the coming decades, and it will be fiscally burdensome to support the aged.

The Crisil report has built pension scenarios for India’s retired population in the future decades. According to their calculations, India’s best case can be where the economy can avoid fiscal burdens.

The estimates in the above scenarios are built on the assumptions about the government sector pension liability, retirement corpus and other demographic assumptions. The scenarios are feasible only if private pension cover is increased.

With private cover at only 8%, India’s aged population will be in a crisis, post retirement. The report has suggested that we need more investments in private pension sector.

Ageing population adds as a fiscal cost. Currently, that cost is 2.2% of GDP in India. And since we know that India’s population is going to be ageing in the future, policy demands that the burden should not increase. The scenario built by Crisil works out to 3.4% of GDP in 2030 and 2.6% of GDP in 2050.

We have seen in our earlier report that India’s population will be stable by 2026. Which means fewer babies will be born. So, as years pass by, people in the working age group (15-59 years) will be comparatively lower than the earlier decades. Since, this group adds wealth to the economy while the younger and older population are dependent on them, it may create a financial imbalance. 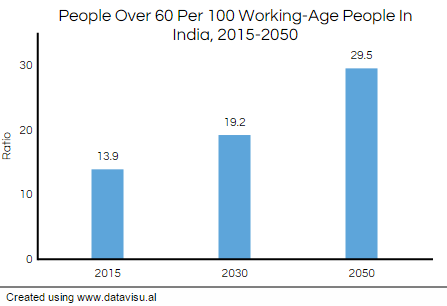 By 2050, the proportion of the dependent population in India will be more than double the current level. Scandinavian and western European countries were the first ones to face the challenges of ageing population. Sweden, for example, has old age dependency ratio as high as 27.9% currently and Germany is at 31.6%.

Global Age Watch Index, published by HelpAge International, an NGO dedicated to the rights and challenges of the elderly around the world, last year provides some international comparisons.

Norway tops the list because of its high income security for the elderly while Japan offers the best healthcare for its senior citizens.

Even when India is compared with BRICS nations, the government can surely take a good look at their best practices and develop similar programmes for the aged as part of prudent fiscal management.