88 Years On, 5% Military Officers Are Women 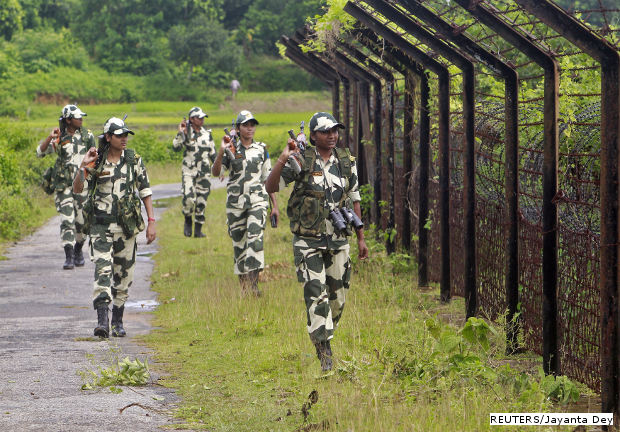 Women have now served in India's armed forces for 88 years, but despite their recent prominence, they hold only temporary ten-year jobs, are not allowed on fighting ships, fighter planes and other combat units, and make up only 5% of military officers.

So, is the Indian military doing well by its women or not?

India now has more than 8,350 women military officers (including those from Armed Forces Medical Services and Military Nursing Services). If you add officers and non-officers of paramilitary forces, such as the Border Security Force (BSF), Central Reserve Police Force and Coast Guard, the number of women in the military exceeds 25,000, according to government data.

Women fly helicopters and transport aircraft, and wield weapons and patrol the borders (BSF) and perform a variety of other roles as lawyers, engineers and teachers. The majority are doctors and nurses, as the chart above shows.

India is not one of 25 countries that allow women in combat roles, be they restricted or full-fledged.

While many European countries, along with Israel and Anglophone countries, such as Canada and Australia, deploy women in combat positions, there are few outside the developed world that do so. A notable exception is Eritrea (where a third of the armed forces were once women) and Pakistan, Malaysia and South Africa, which deploy female fighter pilots.

Pakistan has more than 4,000 women serving in its armed forces, largely confined to desk jobs and medical work. More than 300 women serve in the Pakistani Air Force, including fighter pilots.

The 66th Republic Day parade, also for the first time, witnessed what the Prime Minister called narishakti (woman power), with women contingents from the army, air force and navy marching down Rajpath.

This recent celebration of women in the military hides India's history of caution and conservatism.

Women officers have served in India's armed forces for 88 years. They were first inducted in the military nursing service in 1927 and as medical officers in 1943.

It was to be another 49 years before independent India, after a cabinet decision in 1992, started hiring female officers in other branches of the armed forces.

The rub is that women are only hired under what are called short service commissions (SSC), for 10 years, with a possible four-year extension if they so choose. The armed forces medical services is the only branch that offers permanent commission.

The government has granted permanent commission to women serving in the army's legal and education corps, their corresponding branches in the navy and air force, the accounts branch of the air force and as air traffic controllers in the navy.

In Israel, a country which drafts women and is known for integrating women in almost all fighting units, change came after 1995 when a South African immigrant with a pilot's licence was denied a flying job and successfully sued for discrimination, as the journal Foreign Policy reports.

The navy has 819 women officers; 406 in the medical/nursing services and 413 in other branches. Women officers in the navy are recruited in the executive, education and naval architecture cadres of the engineering branch.

In the Indian Air Force (IAF), women officers serve as pilots (not on combat aircraft, although it can be argued that transport aircraft and helicopters fly into battle zones), aeronautical engineering (electronics/mechanical), education and administration: 1,871 women officers are serving in the IAF; 543 with medical/nursing services and 1,328 in other branches.

The paramilitary forces do better

In general, India's paramilitary forces tend to be more liberal in deploying women in frontline positions, whether riot control or, as we said, border patrol.

In the Indian Coast Guard, women are commissioned for general duty, including pilot and navigator. IndiaSpend had earlier reported that the Coast Guard has 103 women officers.

Among the paramilitary forces, Central Reserve Police Force (CRPF), with a total of 5,928 women, tops the list.

The CRPF deploys three exclusive mahila (women) battalions; one each headquartered at Delhi, Gandhinagar (Gujarat) and Nagpur (Maharashtra). One mahila (women) platoon of each of these battalions has been depoloyed in Bihar, Chhattisgarh and Jharkhand for anti-Maoist operations.

Eight women ITBP personnel are in service in the Congo and Afghanistan.

The Ministry of Home Affairs issued an advisory in 2013, asking states and union territories to raise the representation of women in the police to 33%.