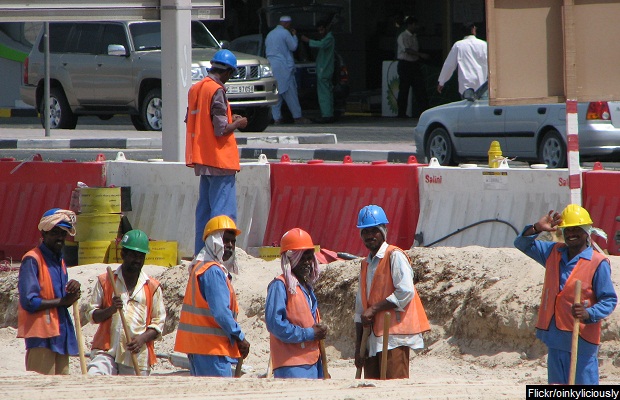 As thousands of laid-off Indian workers in Saudi Arabia were said to be without food, 87% of complaints received from Indian workers at Indian missions across nine countries were from six Gulf countries, with nearly half of those from Qatar and Saudi Arabia, according to government data.

55,119 complaints of ill-treatment and "exploitation" of Indian workers were received by Indian missions across nine countries over the last three years, according to data tabled in the LokSabha (lower house of Parliament) by Ministry of External Affairs on July 20, 2016.

The number of Indian workers facing food crisis in Saudi Arabia is over Ten Thousand. It is not 800 as is being reported. @JagranNews

Swaraj promised, through a series of tweets, “that no Indian worker rendered unemployed in Saudi Arabia will go without food”.

I assure you that no Indian worker rendered unemployed in Saudi Arabia will go without food. I am monitoring this on hourly basis.

The complaints received from Indian workers include “non-payment/delayed payment or underpayment of salaries, long working hours, inadequate living conditions, physical harassment, non-renewal of visa and labour card on time, refusal to pay for medical treatment, denial of leave and air-ticket to home town on completion of contract period, forcible custody of passport and visa and refusal of leave or exit/re-entry permits", the ministry said in its reply to the Parliament.

No specific complaint of sexual abuse were reported, the ministry added.

24% of Indians jailed aboard in Saudi prisons

The Indian mission in Saudi Arabia registered 1,676 complaints during the first half of 2016.

An average of 69 Indians die every year in the six Gulf countries. The corresponding figure for the rest of the world is 26.5, almost 60% lower.