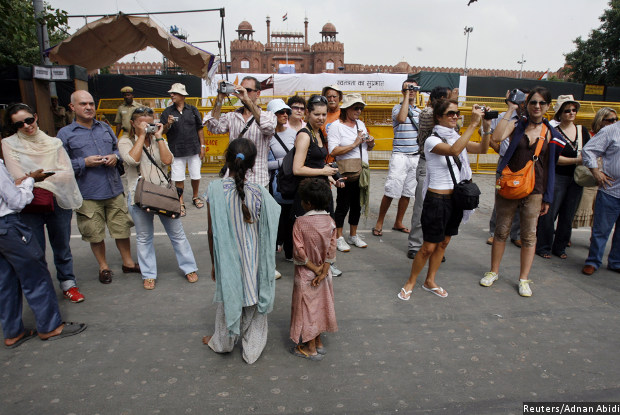 Foreign tourists take pictures outside the historic Red Fort in the old quarters of Delhi. As many as 1,367 foreigners were arrested in 2015 under the Foreigners Act, 1946, which is meant to prevent illegal entry and stay in India.

The number of foreigners overstaying or illegally entering India rose 84% in 2015 over the previous year, according to data released by National Crime Records Bureau (NCRB).

Ten times as many foreigners were also arrested for this breach of the 70-year-old Foreigners Act--the most-reported crime--than for possession of illegal narcotics and substances, the NCRB reported.

As many as 1,367 foreigners were arrested in 2015 under the Foreigners Act, 1946, which is meant to prevent illegal entry and stay in India.

The next largest number of arrests (128 people) was of foreigners found with illegal narcotics or substances, a 14% increase over 2014.

The Foreigners Act states that foreigners must enter and exit India where and when they are told. The Act is meant to prevent illegal entry and stay in India by ensuring that what foreigners do in India can be monitored and controlled.

Foreigners are also not allowed to operate under any alternate name during their stay in India, and hotel owners have to keep copies of the visas and passports of foreign guests. Penalties under the Act are a prison sentence of up to five years and a fine.

As many as five Bangladeshis were arrested under the Foreigners Act for staying in Thane, a Mumbai suburb, without valid passports, the Times of India reported in March 2016. They were jailed for two years and fined Rs 2,000.

A woman from Uzbekistan was arrested in May 2016 under the Act for not having a valid visa, but she claimed to have been abducted and brought to India.

As many as 2,631 foreigners were awaiting trial for crimes committed under the Foreigners Act at the end of 2015, more than for any other crime.

As many as 627 foreigners were convicted for crimes under the Foreigners Act in 2015, a 120% increase over 2014. The conviction rate was 92%, and 684 trials were completed with 56 foreigners acquitted.

Further, 126 convictions--the second largest number--were under the Registration of Foreigners Act. Only 10% trials were completed for this crime, and 1,689 foreigners were on bail or in custody at the end of 2015.

The next largest number of convictions was for fake passports: 63 people were convicted, a conviction rate of 71%; only 89 trials were completed, leaving 2,407 pending at the end of 2015.

The conviction rate was 44% for drug crimes: while 24 foreigners were acquitted of drug crimes, 20 were convicted.

There were 26 foreigners to be tried for rape in 2015, 17 of them running over from 2014 in which only one trial was completed and the result was an acquittal. None of the rape trials were completed in 2015.

Three foreigners were convicted of murder in 2015, and there were 15 pending trials at the end of the year.