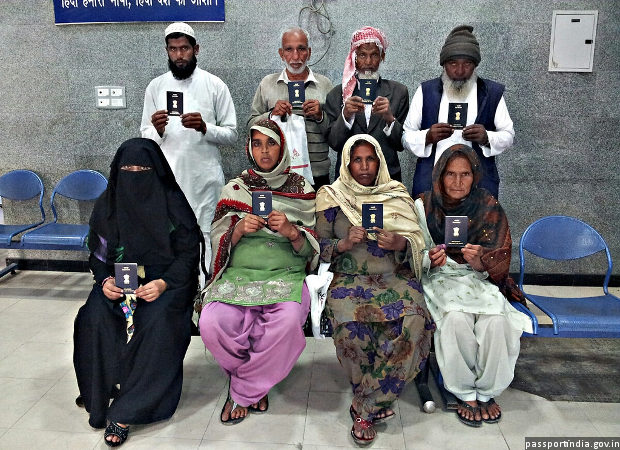 Indian citizens display their passports during a special drive held for Haj applicants at Regional Passport Office, Chandigarh, in 2014. The national average for issue of normal passports was 71 days in 2014 against the total prescribed time of 24 days.

It took 71 days to issue an Indian passport in 2014, nearly three times as long as the 24 days fixed by the government, and the police took twice as long as they should (42 days instead of 21) to verify applicants’ information, according to a recent audit report from the Comptroller and Auditor General of India (CAG).

No more than 21% of passport applications were processed that year by regional passport offices (RPOs) within three working days, as they should be after police verification. The proportion of passports processed in time fell from 26% in 2013, the CAG report said.

The audit of 37 regional passport offices (RPOs) was conducted between June 2012 and August 2015.

In 2008, Tata Consultancy Services (TCS), an information-technology company, signed a deal with the Ministry of External Affairs to speed up passport issue.

The average time for regional passport offices (RPOs) to process passport applications, after police verification, increased from nine days--against the prescribed three days--in 2013 to 16 days in 2014, more than five times longer than it should be.

“Henceforth, normal passport applications of all first time applicants furnishing Aadhaar, Electoral Photo Identity Card (EPIC), Permanent Account Number (PAN) and an affidavit will be processed on post-police verification basis, enabling faster issue of passport, without payment of any additional fees,” said this statement from the Ministry of External Affairs earlier this year.

Average police verification time 42 days, twice as long as it should be

In 2014, police verification of applicants, a key step in issuing new passports, took 42 days, double the time fixed for the process, 21 days, the CAG audit found. This was seven days quicker than in 2013.

The average time declined to 36 days for 2015 for the period for which data were available, January to June.

The CAG report also mentioned that the delay in police verification report in some states and union territories was because there was no electronic connectivity with passport offices. As many as 35% of police verifications took more than 180 days.

Earlier this month, the Delhi High Court recommended that the Centre “revisit” its system of applicant checks, noting that even the government admitted to "lacunae in the system" that allowed the use of false or forged documents.

ProcessingThe service time taken by the MEA for processing a normal passport application was three working days (excluding Police verification time) under the Passport Seva Project, which included processing of application, printing and lamination of passport and its dispatch.

Police verificationOnce an applicant applies for passport, the police should complete their verification in 21 days as per prescribed time.