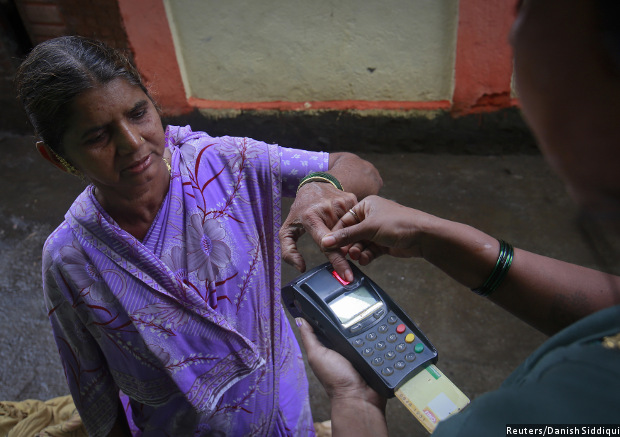 As many as 358 million Indian women (61%) have bank accounts, up from 281 million (48%) in 2014, the biggest jump for “banked” women among eight South Asian and African countries surveyed by Intermedia, a global consultancy.

The survey revealed that more women in India are financially included than ever before, and women closed the gap with men by 4 percentage points, the quickest among all the surveyed countries. However, finer details on their participation in the banking system are not available because the government is not releasing data on other financial-inclusion indicators. 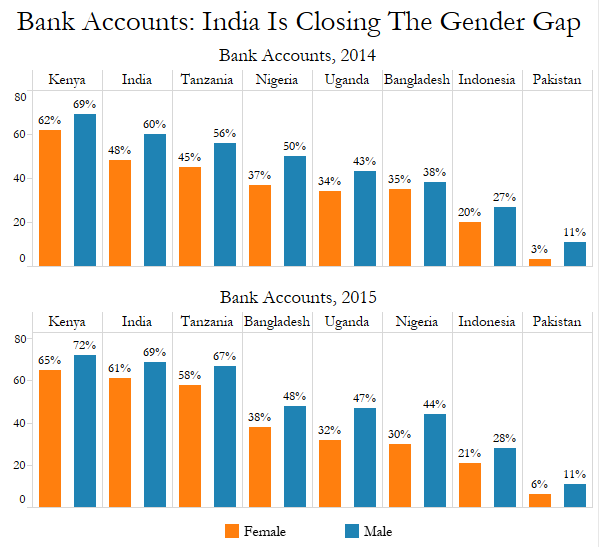 “Financial inclusion among women in India and Bangladesh is driven primarily by access to bank accounts while most Tanzanian women rely on mobile money for their financial needs, a trend that was enabled in part by greater mobile phone ownership and ‘text savviness’ among women in Tanzania, compared to India or Bangladesh,” Nathaniel Kretchun, senior associate director, InterMedia, told IndiaSpend. “The gender gap persists despite positive growth in all countries.”

India and Tanzania have successfully reduced the gender gap over a year (2014 to 2015)--from 12% to 8% in India and 11% to 9% in Tanzania. Inclusion among women in Bangladesh grew in absolute terms, but the gap between men and women grew from 3% to 10% over this period.

This finding is in line with the larger tendency of Indians to rely on informal sources, such as moneylenders, friends or family. For instance, while the flow of credit to the agricultural sector increased, the share of small loans from formal institutions has steadily declined, IndiaSpend reported in July 2016.

The Pradhan Mantri Jan Dhan Yojana (PMJDY) or Prime Minister’s Programme for People’s Bank Accounts, has largely been responsible for the growth of financial inclusion in India, said Kretchun. Over 21 months, deposits in what are called “Jan Dhan”, or basic savings, accounts grew 118%, IndiaSpend reported in June 2016. 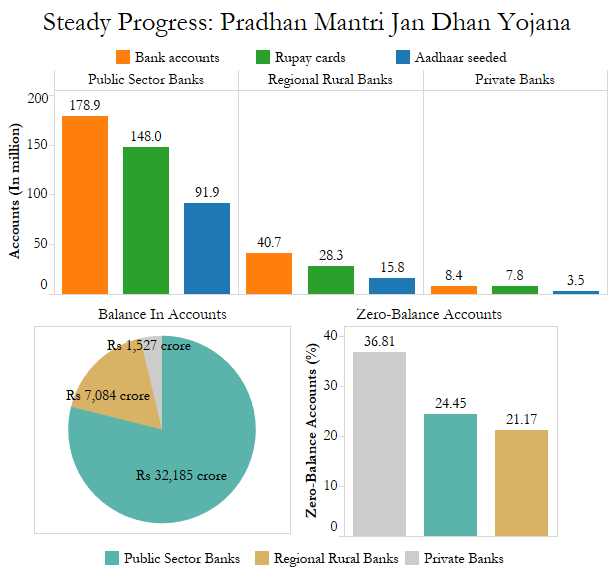 Source: Ministry of Finance, Government of India, Accounts in million; balance in Rs crore; Data as on August 3, 2016

“What’s interesting is that despite the fact that the programme was not targeted at women, financial inclusion among women has grown at a faster rate than among men under PMJDY,” said Kretchun.

One explanation is that very few women had a bank account to begin with (in 2013, before PMJDY, only 39% of women had bank accounts, compared to 55% of men). “Thus, it had more room to grow,” said Kretchun. “It is also likely that by requiring banks to provide accounts and advertising the existence of those accounts, the programme lowered social barriers to access, which disproportionately affected women.”

No open data on banked men and women: A policy challenge

But PMJDY is one part of the financial system. There are other indicators which require evaluation to monitor the progress of financial inclusion.

“It is heartening to see that the PMJDY Mission Directorate has progressed from monitoring only the number of accounts to tracking a number of indicators,” Sumita Kale, chief economist at Delhi-based Indicus Analytics, wrote in Business Standard in May 2016.

Those indicators include the linking of bank accounts to Aadhar digital identities—1,038 million of which have now been issued—the issue of RuPay cards (a government-driven programme), how overdrafts are used in Jan Dhan accounts, payment to and technological readiness of bank mitras--agents of bank in places where there are no branches. But, as Kale noted, the government has not made available data on many of these indicators, by gender.

The only sources of information about the impact of these schemes on women are surveys conducted by independent agencies, such as InterMedia.

“For cash transfers, the beneficiary list is already with the government, so they (will) work from that end. Under the National Food Security Act 2013, the woman was to be listed as head of the household for the ration card, and this is now being linked to bank accounts as well,” Kale told IndiaSpend. “Digitisation of beneficiary accounts is the next important step. Even if the present generation of beneficiaries is not able to use technology, the future generations will catch up. What we are facing now are teething troubles.”

Up to 44% women in India own mobile phones, and 87% women had access to mobile phones through family or community, according to the InterMedia survey. But only 29% Indian women have ever sent or received text messages on the phones.

Note: The population projections for women are based on Census 2011 data.