Nashik, Maharashtra: Pushpa Kadale was nine months pregnant and had a two-and-a-half-year-old daughter when one night at 4 a.m., her husband asked her to leave the house.

With no money and no place to go, the then 20-year-old borrowed money from a neighbour in Thanapada village of Nashik district in Maharashtra, to take a shared taxi to her parents’ home in Gawandh village, 18 km away. Kadale was a farmer who cultivated the six acres her husband owned.

Now, she cultivates the two acres her father owns. Essentially, her situation is no different--she remains without a title to the land she tills, and, hence, without economic or social security.

“I worked all day at my husband’s farm in Thanapada. He did help me with the ploughing and selling the produce, but I did most of the work,” said Kadale, 32, listing out the relentless cycle of sowing, weeding and harvesting that farming entails. “If I had owned at least a part of the land, he would have thought really hard before abandoning me and my children. Also, it would have secured my children’s future.” 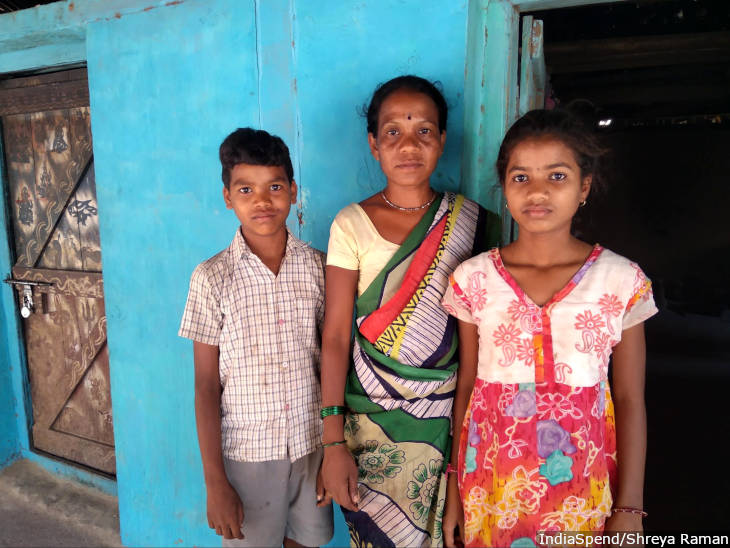 Pushpa Kadale, 32, with her daughter, 14, and son, 12. Kadale, a farmer from Gawandh village in Nashik district of Maharashtra, was abandoned by her husband 12 years ago. With no land to her name, she now looks after her children and her ailing parents by cultivating her father’s two acres of land.

Like Kadale, many women farmers in India do not own the land that they cultivate. In a country where 73.2% of rural women workers are engaged in agriculture, women own only 12.8% of land holdings. In Maharashtra, 88.46% of rural women are employed by agriculture, the highest in the country. In western Maharashtra’s Nashik district, women own only 15.6% of the agricultural land holdings, amounting to 14% of the total cultivated area, as per the Agricultural Census of 2015.

Research has long established that women who own land have better economic and social security. “By diminishing the threat of forced eviction or poverty, direct and secure land rights boost women’s bargaining power in the home and improve their levels of public participation,” said a 2013 report by the United Nations.

Land acts as a bargaining tool for women, said Anita Pagare, a women’s rights activist based in Nashik. “With no land to their name, women are completely at the mercy of their husbands or their family.”

Land transfer in India occurs mainly through inheritance and this is mediated through a series of religion-centric personal laws. As per the Hindu Succession Act (HSA), after a male Hindu’s death, the land has to be divided among the widow, the mother and the children of the deceased. HSA is also applicable to people following Sikhism, Buddhism or Jainism.

Muslim women under the Muslim personal law get one-third of the share in property, while men get two-thirds. This is not applicable to agricultural land, except in some states. As per the Indian Succession Act, 1925, Christian widows will get one-third of the property while the remaining two-thirds will be divided equally between the children of the deceased.

Despite the legal rights, social and cultural forces deny women ownership of land.

In Gawandh village, Jijabai Gawli, 40, has been cultivating her husband’s 10 acres for 20 years. However, after her husband’s death seven years ago, she was not given the primary ownership of the land. “The land is firstly owned by my sister-in-law, then my mother-in-law, then my children,” said Gawli, “And as their guardian, I am named last.” 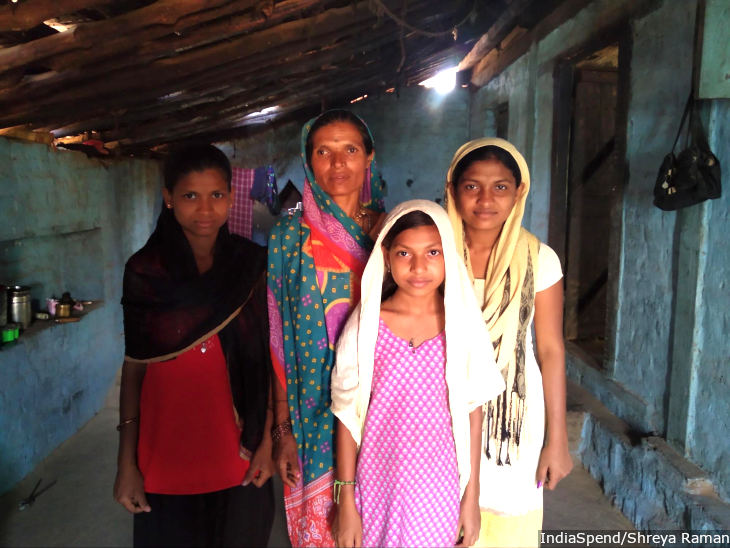 Jijabai Gawli, 40, with three of her daughters. Gawli cultivates a 10-acre piece of land that her husband owned. After his death seven years ago, the farm was transferred to her mother-in-law and sister-in-law. She says she could have secured her children’s future had she owned a piece of the land.

“In our culture, women do not have the right to land,” said Gawli, “My eldest daughter got married two years ago and works on her husband’s land. They will not transfer their land to her. She is an outsider.”

With four daughters and a son, Gawli said she would have been able to manage her expenses better and could have secured her children’s future had the land been in her name.

As many as 29% of the wives of indebted farmers who committed suicide were not able to get their husband’s land transferred to their names, said a 2018 study by Mahila Kisan Adhikar Manch (MAKAAM), an informal forum working to secure rights of women farmers in India. Of the 505 women that were covered in the study, 65% were not able to get their houses transferred to their names.

Savita Gaikwad, 31, has been cultivating the 15 guntha (0.375 acre) of land that her father-in-law owns in Nashik’s Songaon village since her marriage 13 years ago. Three years ago, her husband committed suicide because he could not pay back a Rs 1.5 lakh farm loan. Since then, she and her two sons, aged 12 and nine, have been dependent on her husband’s family and her father-in-law’s land.

After her husband’s death, Gaikwad asked her father-in-law to transfer the land to her name, but he refused. He asked her to make do with the yield from the land. “The farm requires an expenditure of Rs 10,000-Rs 11,000 annually and the returns depend on the yield. Last year, there was not much yield so I could not earn anything,” said Gaikwad, adding, “I need at least Rs 2,000 per month to take care of all the basic necessities for me and my sons.”

In order to make ends meet, Gaikwad takes up work as an agricultural labourer for a daily wage of Rs 150, in addition to working on her farm. 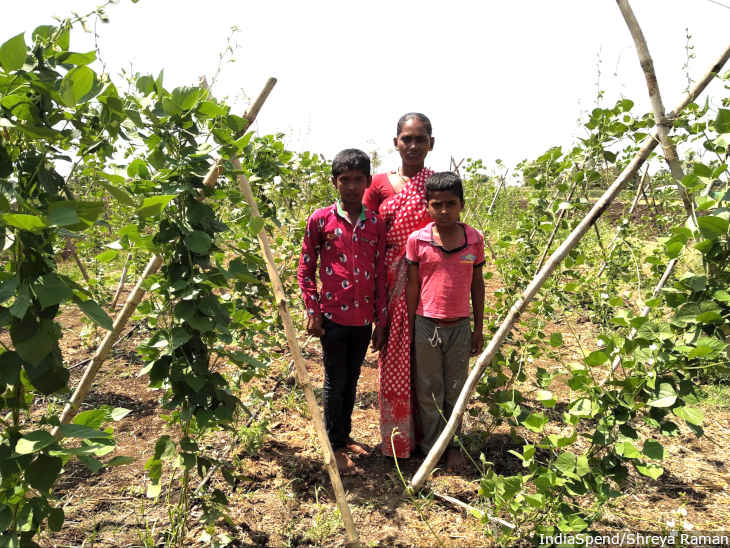 Savita Gaikwad’s husband committed suicide due to farm debt three years ago. Gaikwad and her two children are now dependent on her father-in-law’s land for survival.

Gaikwad also worries that someday she may be asked to vacate her house. Two years ago, her father-in-law took a loan on the land to build a new house where he, his wife, his son and daughter-in-law live. Gaikwad lives independently with her children in a house made with tin sheets held up with wooden beams. 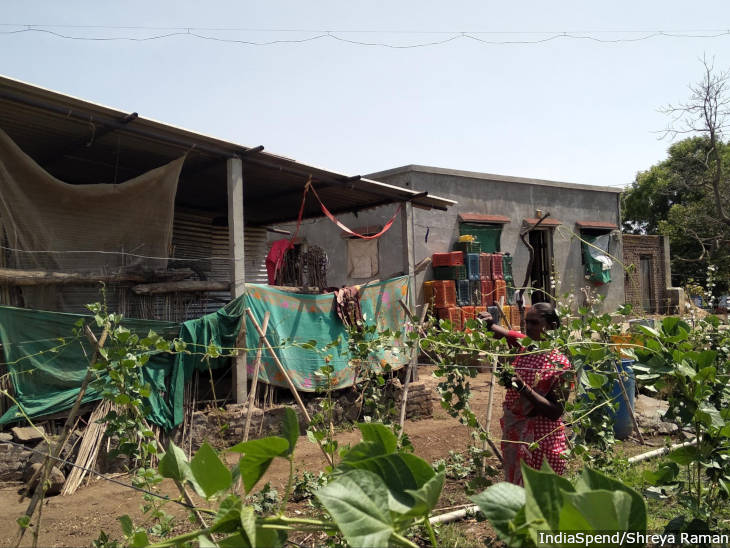 Savita Gaikwad working on land that her father-in-law owns. Two years ago, her father-in-law took out a loan on the land to build a house (right). Gaikwad, who lives independently with her children in a house (left) made with tin sheets and wooden beams, worries that someday she will be asked to vacate the farm.

Gaikwad’s land was insured under the Pradhan Mantri Fasal Bima Yojana (Prime Minister’s Crop Insurance Scheme or PMFBY) last year, but the insurance amount was transferred to her father-in-law who owns the land. “Government schemes may have helped farmers. But since my father-in-law owns the land, he gets all the benefits,” says Gaikwad.

Women’s access to government schemes and other facilities is curtailed when the land they till is not in their name, said Seema Kulkarni, a member of the national facilitation team at MAKAAM.

The National Policy for Farmers, 2007 recommended a broader definition of a farmer, including labourers, tenants and other workers, but the government’s definition is based on ownership of land. The revenue department defines a farmer based on the land title records and the agriculture department follows the revenue department’s definitions, Kulkarni said. “Hence, most of the schemes require the submission of land title record, limiting the beneficiary base to landowners,” she said.

Access to institutional credit is also limited with no land ownership. The only funding options available to women with no land are self-help groups (SHG) and microfinancers, said Kulkarni, “With limited funding at SHGs, most women go with the microfinancers and accept their high interest rates and borderline inhuman recovery processes.”

In cases of farm suicides, access to institutional credit is of increased importance. After the death of the husband, the burden of paying off the debt falls on the widow. Most (58%) of these widows are younger than 45 and only a handful (1.7%) had other sources of income than agriculture, said the study by MAKAAM.

Gaikwad said she has not yet been able to repay her husband’s debt. “Some people had come to ask me for the money. But I told them of my situation. So they left,” said Gaikwad, “They might come back and I don’t know what I will do or how will I pay them.”

The Maharashtra government provides an ex gratia amount of Rs 1 lakh to the family of an indebted farmer who commits suicide. However, the death must be declared as farmer suicide for the family to get the money. “Documents stating the details of the loan have to be submitted to the committee constituted under the collector. After the committee approves it, the family gets the money,” said Raju Desale, working president of the All India Kisan Sabha (AIKS), a farmers’ union.

Gaikwad said she has not yet received the ex-gratia amount and that she has no idea about the procedure to get it.

IndiaSpend tried contacting the officials at the Maharashtra revenue and forest department to know more about the implementation of the resolution but has not received a response yet. We visited the office of the principal secretary, Manu Kumar Srivastava, sent the office two emails and tried contacting him via the telephone five times. We will update this story if and when we receive a response.

(Reporting for this story was funded as a part of the Impact Journalism grant.)

Correction: An earlier version of the story erroneously said that the agriculture department defines farmers to include labourers, tenants and other workers. We have now corrected it to say that the National Policy for Farmers, 2007 recommended that definition.

(Shreya Raman is a data analyst with IndiaSpend.)