72% Rise In Crimes Related To Lotteries 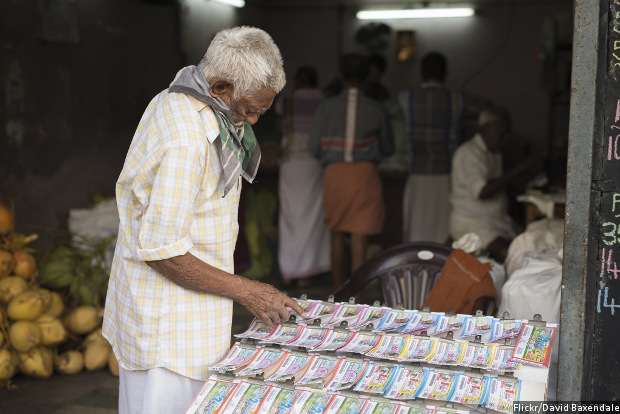 An old man in Kerala in India tries to pick out a lottery ticket. The Lotteries (Regulation) Act has been drawn on by the Supreme Court to allow the government in Kerala to ban online lotteries on November 5, 2016.

Offences reported under Lotteries (Regulation) Act, 1998 are non-cognisable; meaning a police officer cannot make an arrest without a warrant or initiate an investigation without a court order.

The Lotteries (Regulation) Act, 1998 has set out clear guidelines for state governments on how lotteries must operate at the local level. Some of the rules are that lottery tickets must be printed by the state government and bear their official imprint and logo, no more than one draw per week is legal, and the proceeds of the sales of lottery tickets must be deposited into the states' accounts.

As of 2010, the rules demand that the first prize in any lottery draw must be at least Rs 10,000. On festivals or special occasions, ‘bumper draws’ can be run where the prize money is higher. The first prize for the bumper draw in Kerala on July 20, 2016 was Rs 3 crore.

Trade estimates peg the national collection from the sale of lottery tickets at Rs 46 crore per day. In Kerala alone, for financial year 2015-16, the collection was Rs 5,696 crore as of February 29, 2016. The target for the full year was Rs 6,250 crore, according to former chief minister Oommen Chandy.

Controversy has surrounded lotteries at the state levels over the past year. The Lotteries (Regulation) Act has been drawn on by the Supreme Court to allow the government in Kerala to ban online lotteries on November 5, 2016.

The Act has also been cited in an on-going controversy regarding the alleged lotteries of the former Congress-Nationalist Congress Party government in Maharashtra, and the police shut down an online lottery racket in Puducherry under the Act in July 2016.

Anybody who acts as an agent, promoter or trader in a lottery group that does not comply with the terms of the Act is in danger of two years imprisonment or a fine, or both.

If a department of a state government is involved in a lottery of this nature, then the head of that department will face the same punishment.