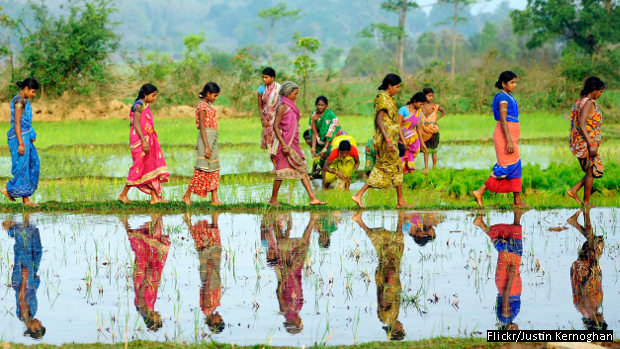 What the Manusmruti, an ancient Sanskrit text, said about women--who form 48.9 % (587 million) of India's 1.2 billion population--is particularly relevant to a demographic that is usually not accorded honour: 71.4 million single women, or 12% of the female population.

There was a 39% increase in the number of single women in India, the numbers rising from 51.2 million in 2001 to 71.4 million in 2011, according to census data. This includes widows, divorcees and unmarried women, and those deserted by husbands.

“The reasons for the increase in population of single women are divorce, separation as well as widowhood,” said Nirmal Chandel, president of the National Forum of Single Women’s Rights, an advocacy.

Women in the age group of 20-24 (16.9 million) are almost 23% of single women, indicating that the age of marriage might have moved.

Single women in the age group of 25-29 have seen the greatest increase (68%) between 2001 and 2011, followed by women in the 20-24 age group (60%). These increases could indicate the breakdown in marriages that Chandel alluded to.

Widowed women, 29.2 million, lead the single-women category in rural areas followed by those who never married at 13.2 million.

The situation is the same in urban areas: Widows make up the maximum number of single women at 13.6 million followed by those who never married, 12.3 million.

Although rural single females outnumber their urban counterparts, there was a 58% increase in the number of urban single women, from 17.1 million in 2001 to 27 million in 2011.

Uttar Pradesh has the highest number of single women, 12 million; the majority has never been married, followed by Maharashtra at 6.2 million and erstwhile Andhra Pradesh at 4.7 million.

UP again leads the table with households headed by women, 2.5 million, followed by Andhra Pradesh (2.5 million) and Tamil Nadu (2.4 million).

“Single women in rural areas have to constantly battle societal prejudices and fight for survival,” according to a recent National Forum For Single Women’s Rights (NFSWR) report.

“The atrocities faced by widowed women ...[from] in-laws after the death of their husbands are more acute as they are caught between rigid social & religious customs,” NFSWR said.

Single women are not only vulnerable to both physical and financial insecurity but also often face overt discrimination, as a meeting organised by NFSWR last month discussed.

The forum discussed how many women technically head households and provided for their children but are hardly ever named as heads of families in ration cards or receive social benefits.

“In Jharkhand, for example, tribal women cannot own land in their own names, and we are fighting to change the law," said Suhagini Tudu, secretary, NFSWR. "Even where women have the legal right, we have seen that actual possession and control of land is a distant dream for many.”

Note: This analysis considers only women older than 20.