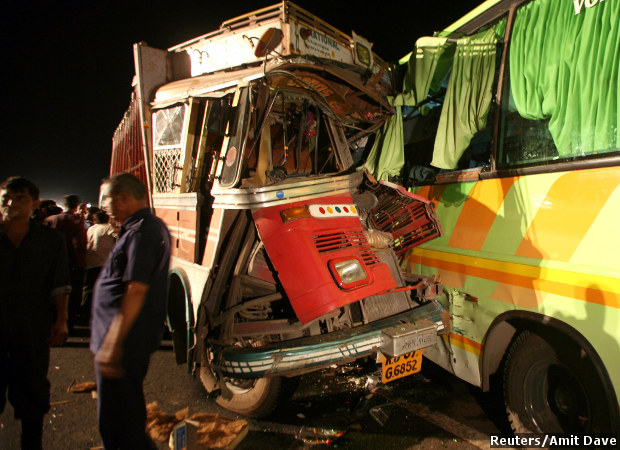 The viral video of a 32-year-old man, Siddharth Sharma, being mowed down by a Mercedes car driven by a teenager in Delhi has generated a lot of outrage, but Sharma is one of 71 Indians who die every day in accidents involving cars, jeeps and taxis, according to an IndiaSpend analysis of government data.

As many as 139,671 people lost their lives on India’s roads during 2014, which means 382 died every day, IndiaSpend had reported. The data reveal that Delhi is India's deadliest city: 1,671 died in road accidents that year.

Sharma’s death sparked questions about growing lawlessness on Delhi's roads, which have witnessed a 24% rise in road accidents over three years.

In December 2015, the Delhi Traffic Police complied with the Supreme Court’s recommendations of enforcing stricter traffic rules, such as suspending the driving licences of violators for three months.

As the incident video shows, Sharma was a pedestrian trying to cross the road when he was mowed down: 12,330 pedestrians were killed in 2014, accounting for 8.8% of the total deaths.

The car was being driven by a 17-year-old, who was with seven friends, according to this Times of India report, which means he did not have a driving license. The minimum age to get one is 18.

Further, the accident happened around 8:45 pm, during an accident-prone period: 17% of accidents occur between 6 pm and 9 pm.

As many as 8% of road accidents involved drivers without a license. The juvenile was a repeat offender, the police found.