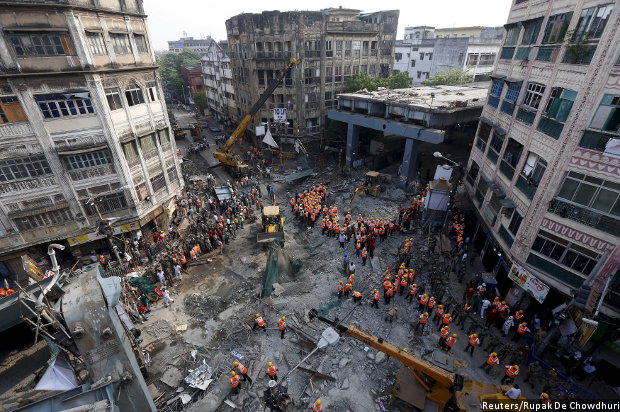 A general view of the under-construction flyover that collapsed on Thursday in Kolkata.

As many as 13,178 people lost their lives due to collapse of various structures between 2010 and 2014, according to data compiled by National Crime Records Bureau (NCRB).

Based on 13,473 such cases between 2010 and 2014, there are an average of seven such incidents every day, Factly.in, a data-journalism portal, reported.

Kolkata witnessed a tragic flyover collapse on Thursday after a part of the under-construction 2.2 km-long Vivekananda Road flyover crashed on the traffic. The death toll rose to 24 on Friday.

The NCRB collates data in its annual report ‘Accidental Deaths & Suicides in India’. Various un-natural causes of death are listed in the report, and collapse of structures is one the causes captured by the NCRB.

The number of deaths due to collapse of structures in 2014 was the lowest of the five years at 1,821.

The NCRB categorises data on collapse of structures into five categories. From 2010 to 2014, a total of 4,914 people lost their lives because of the collapse of residential buildings, about 37.3% of the total deaths.

The collapse of commercial buildings resulted in 1,610 deaths.

Most deaths in bigger states

While most deaths due to collapse of structures took place in the bigger states, the only exception to the trend was West Bengal.