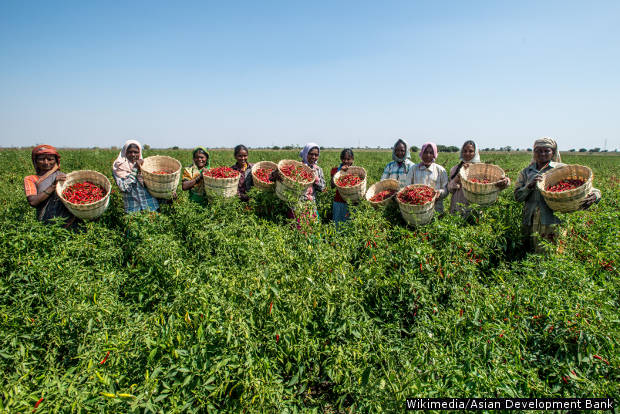 India could boost its gross domestic product or GDP by $700 billion (Rs 46 lakh crore) or 16% more than its business-as-usual growth within ten years by putting women on par with men, according to a study released this month by the McKinsey Global Institute, the financial research arm of the international consulting company.

The potential increase of 68 million working women by 2025 is the largest among the 10 regions analysed by the institute, which also reveals how many fewer are employed here, the study titled “The Power of Parity: Advancing Women’s Equality in India” noted.

It would translate into an additional 1.4% annual increase in India’s GDP. As much as 70% of this would come from raising the proportion of women in the labour force--from 31% today to 41%.

The $700 billion boost that India would get from bringing more women into the workforce is enough to pay for the country’s defence budget for 18 years, more than 45 times the government’s annual spending on health and education and nearly four times the estimated cost of the building a 10,000-km, high-speed rail network between the cities of Delhi, Mumbai, Chennai and Kolkata.

McKinsey used four kinds of indicators, totalling 15: one category pertains to gender equality in work, and the other three to gender equality in society. These comprise access to essential services and enablers of economic opportunity, legal protection and political voice, and physical security and autonomy.

It used these indicators to calculate a Gender Parity Score, or GPS, a measure of where each country stands on a scale of 0.00 to 1.00, where full gender parity is set at 1.00. India’s GPS is just 0.48, lower than warranted by its stage of economic development.

For this exercise, McKinsey developed the Indian Female Empowerment Index or Femdex, based on ten of the 15 indicators for which data were available at the national- and state-level. It found huge gaps in gender parity, which indicated what work needs to be done ahead.

Five states were closer to gender parity – Sikkim, Mizoram, Meghalaya, Goa and Kerala – with an average index of 0.67. This compares favourably with China, Argentina and Indonesia, using the same ten parameters.

The worst off were Bihar, Madhya Pradesh, Uttar Pradesh (these three formed part of what were earlier known as the BIMARU states, with Rajasthan), Assam and Jharkhand with a score of 0.46, approximating the situation in Chad and Yemen.

However, the absolute numbers tell a different story: the top five states account for just 4% of India’s female working population, while the bottom comprise as much as 32%.

Out of the potential 68 million in 2025, there would be 21 million more in cities and 47 million in villages. Some 37 million of these new female entrants into the labour force would be better educated, while the rest would have had primary education or less.

As much as 70% percent of the potential new workers could come from the nine states of Andhra Pradesh, Gujarat, Karnataka, Maharashtra, Madhya Pradesh, Tamil Nadu, Telangana, Uttar Pradesh and West Bengal. These states could be at the vanguard of policies to boost jobs and the enablers of economic participation for women.

To add these numbers to the workforce in a decade, India needs to close gender gaps in primary and secondary education, improve their skills and strengthen legal provisions for women and enforce laws, according to McKinsey.

At 17%, Indian women contribute less to the country’s GDP than the global average of 37%, and lowest among all regions studied in the world. By contrast, China registers 41%, sub-Saharan Africa – often considered the most backward region the world by many indices – 39% and Latin America 33%.

If one isolates those working for wages – as distinct from unpaid household, farm or other labour – India’s women comprise only a quarter of the work force, as against a global average of 40%. This is on a par with the Middle East and North Africa, known as MENA countries where, unlike India, women are sometimes legally debarred from doing certain jobs.

A range of countries, such as Bahrain, Malaysia and even Somalia (37%) do much better, IndiaSpend reported earlier.

If women in India participated in the market economy on equal terms with men, this would boost productivity the most in the world, erasing the current gaps in labour participation rates, hours worked and representation within each sector.

The below-potential employment in the market economy contrasts with their higher share of unpaid work in activities such as cooking, cleaning and taking care of children and elder members of a household.

Globally, women spend three times more time on unpaid work than men. In India, women perform 9.8 times more. If that was assessed for wages, it would add Rs 19.85 lakh crore or $300 billion to the GDP.

As many as 26 out of the 95 countries have a lower per capita income and human development index (HDI) than India. Many have worse gender disparity than India, but ten out of the 26, including two in South and Southeast Asia, have better parity in seven or more of the 12 indicators used for this comparison.

Women who do work are at the bottom of economic pyramid

In India, more women tend to work in low-productivity jobs, such as agriculture. Of all female employment in rural areas, three-quarters work on farms as against 59% males.

The gender gap extends to leadership roles. Only 7% of women with primary education are senior officials as against twice as many men, McKinsey found from National Sample Survey Organisation (NSSO) data.

When it comes to technical jobs, women comprise only 38% of the workforce.

On a global scale, a “full-potential scenario” where women work shoulder to shoulder with men would boost the world’s GDP by 26% to $28 trillion (Rs 1853 lakh crore), equal to the combined GDPs of the US and China today, according to a McKinsey study in September.

However, the “best-in-region” scenario, in which all countries match the rate of improvement of the best performing country in their region, would add as much as $12 trillion (794 lakh crore) in annual 2025 GDP, says the study titled “The Power of Parity: How Equality for Women Can Drive $12 trillion in Global Growth”.

It mapped 15 gender equality indicators for 95 countries and found that 40 of them have high or extremely high levels of inequality on at least half of the indicators.

This potential economic outcome is equivalent in size to the current GDP of Japan, Germany, and the United Kingdom combined, or twice the likely growth in global GDP contributed by female workers between 2014 and 2025 in the business-as-usual case.

Both advanced and developing countries stand to gain. In 46 of the 95 countries, the best-in-region outcome could increase annual GDP in 2025 by more than one-tenth over business-as-usual. This scenario delivers the highest potential boost to 2025 GDP in India and Latin America.

The regional GPS is lowest in South Asia (excluding India) at 0.44 and highest in North America and Oceania at 0.74.

And the problems with the McKinsey study

The McKinsey study’s fundamental premise of women’s work as “work” and “non-work” is misleading because “non-earning” isn’t the same as non-working, according to Amrita Nandy and Rohini Hensman, social scientists in Delhi and Mumbai respectively.

The non-working population was around 728.9 million, of which 159.9 million individuals – or 96.5% -- stated that “household work” was their main occupation, according to the 2011 census.

The value of unpaid work, calculated by the average of minimum wages in the country, approximates $240 billion or Rs 16 lakh crore per year, according to feminist economists. Hence the spectrum of women’s skilled but unpaid work contributes directly to the economy. Women bear this burden and thereby enable other forms of paid labour possible.

The devaluation of women’s productive input into the economy weakens women’s status and leads to defective policies, according to such economists.

McKinsey’s rationale for promoting women’s employment – to boost GDP growth – is also questioned by the two critics. The economic case for gender parity points to women’s paid work being utilitarian and a means to an end, rather than a socially purposeful end in itself.

Women’s work is gravely undercounted both in the census and NSSO, according to Bina Agarwal from Manchester University, the former Director of the Institute of Economic Growth in Delhi.

Admitting that women working outside their homes is seen as lowering the family’s social status, respondents (typically male) report hardworking women as housewives.

Work participation rates could rise rapidly with definition of work that includes family chores, activity in the informal economy and a spectrum of “extra-domestic” unpaid tasks such as keeping poultry, breeding fish and weaving baskets.

Undercounting also feeds into policy, Agarwal said. There is little gender-specificity in employment policies or recognition of the constraints women face because of their household responsibilities.

(D’Monte is Chairperson, Forum of Environmental Journalists of India.)