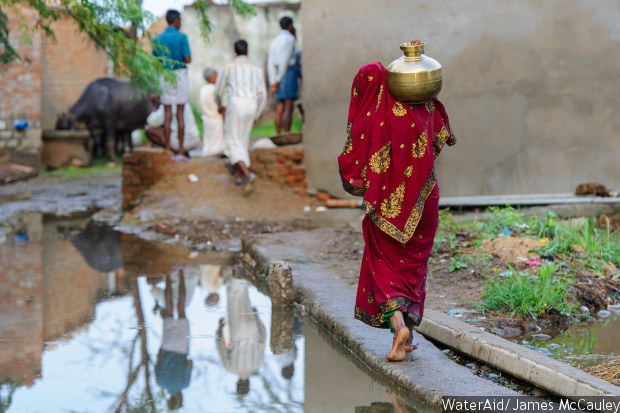 A woman collects water in the village of Narai Ka Pura, in Morena district, Madhya Pradesh. As much as 67% of India’s population lives in rural areas and 7% of its rural population is living without access to clean water

India has more people in rural areas--63.4 million--living without access to clean water than any other country, according to Wild Water, State of the World’s Water 2017, new report by WaterAid, a global advocacy group on water and sanitation.

That is more than the combined population of Punjab, Haryana and Uttarakhand. Compared globally, that is as many people as live in Australia, Sweden, Sri Lanka and Bulgaria--combined.

“With 27 out of 35 states and union territories in India disaster-prone, the poorest and the most marginalised will bear the brunt of extreme weather events and climate change and will find it the hardest to adapt,” said V K Madhavan, chief executive , Water Aid India.

With 67% of India’s population living in rural areas and 7% of the rural population living without access to clean water, India’s rural poor are highly vulnerable to the effects of extreme weather events and climate change.

The report was released to mark the World Water Day on March 22, and it warns of the implications that extreme weather events and climate change may have for the world’s poorest people.

Only 26.9 million out of 167.8 million households (16%) in rural India have piped water, according to data provided by the ministry of drinking water and sanitation to the Rajya Sabha (upper house of Parliament) on February 6, 2017.

Of 1.7 million rural habitations provided drinking water under the National Rural Drinking Water Programme, 1.3 million (77%) habitations are fully covered--defined as having at least 40 litres per capita per day (LPCD)--that is nearly two standard buckets--of safe water; 330,086 (19.3%) habitations are partially covered (safe water is available but below 40 LPCD) and 64,094 (3.73%) are “water-quality affected habitations”--meaning those with contaminated water--in the rural areas as on March 15, 2017, according to this answer to the Rajya Sabha on March 20, 2017.

Iron, which is known to cause respiratory system haemorrhage when mixed with drinking water, according to the World Health Organization, was found in water supplied to 30% or 19,720 rural Indian habitations, according to an answer to the Lok Sabha on March 16, 2017.

Arsenic, known to cause skin lesions and cancer, was found in the drinking water source of 21% of such habitations.

Water availability per capita has been declining in India due to the increase in population.

Scanty rain directly affects water availability. Water levels at 91 major reservoirs were at the lowest in a decade to 2016 because of a nationwide drought, IndiaSpend reported on March 22, 2016.

“With the per capita availability of water continuing to decline, the nation hurtles towards water scarcity,” the environment ministry’s report said. “Climate change, which might bring in its wake increased temporal and spatial variation in availability of water, is likely to exacerbate the water situation.”

“Along with access to safe water, it is critical that communities have the necessary tools, infrastructure and preparedness to deal with the effects of extreme weather events and climate change,” said Water Aid’s Madhavan.