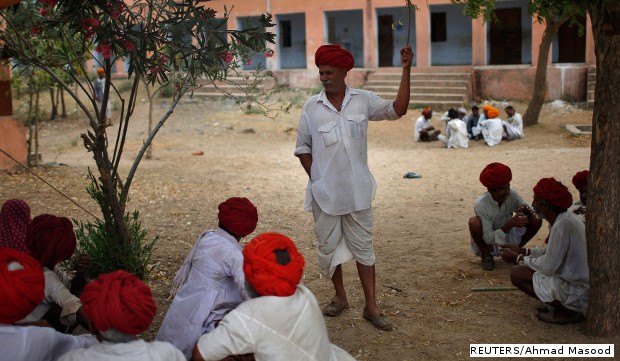 A Rajasthan-government ordinance linking electoral eligibility to educational qualifications will likely disqualify more than 60% of current village-level officials from standing for local elections.

It would immediately disqualify at least 47% of women from standing; the female literacy rate, according to the 2011 census, is only 53%.

With the courts refusing to immediately interfere, it seems most likely that the ordinance will be in effect for ongoing local elections.

Given that education rates are tied to gender, class and caste, this ordinance, one argument goes, will particularly affect already disadvantaged sections of society, allowing the elite to take over governance.

We looked at the educational qualifications of elected panchayat samiti members in the 2010 elections and at data specific to scheduled caste and scheduled tribe members of panchayat samitis, all data being sourced from reports of the Rajasthan State Election Commission.

To be fair, there is evidence to prove that more educated panchayat members may ensure better governance. A recent paper argued that local government officials with lower levels of education adversely affect the quality of public services.

However, given the low literacy levels in rural Rajasthan, enforcing educational eligibility may change the democratic quality of the state. According to the 2011 census, Rajasthan’s literacy rate is around 67%, below the national average of 74%. A plea from retired election commission officials and judges also pointed out that only 5% of Rajasthan’s female rural population has studied beyond grade 5.

There already exist several restrictions to election eligibility in India. Some are in place to ensure that legal equity is translated to representational equity (for instance, reservations). Others disqualify candidates found guilty in a court of law.

In 1994, the Haryana government passed a legislation barring candidates with more than two children from contesting in sarpanch, zila parishad and panchayat samiti elections. In a case called Javed v. State of Haryana, the Supreme Court upheld the legislation, citing reasons of national interest. It ruled that the right to stand for elections was not a fundamental right.

The judgment came under much criticism and led to adverse consequences, such as candidates giving up their daughters for adoption to avoid disqualification.

The Supreme Court ruling has also been used as a justification for the current ordinance in Rajasthan.

Rajasthan Chief Minister Vasundhara Raje pointed to the success of a directive that mandated the presence of a toilet to contest panchayat polls. She said: “Rules such as mandatory construction of toilets and minimum educational qualifications have far-reaching implications. Over the past year, two lakh toilets were made in the state, but after the state government made it mandatory to have a toilet at home to contest the panchayat polls, this figure stands at six lakh in a matter of a month.”

A democracy allows each person to vote for the candidate best suited to speak about their issues and interests. This democratic ideal breaks from the past where ruling classes were based on social ties, land ownership and other markers of privilege. By enforcing educational qualifications, the Rajasthan state government could be accused of violating this principle.

This law was passed via an ordinance, which means there was no debate or discussion amongst elected officials. Raje’s motivations may be well-intentioned but passing an ordinance in haste could have adverse effects.

(The author can be contacted at shruti.viswanathan@gmail.com)