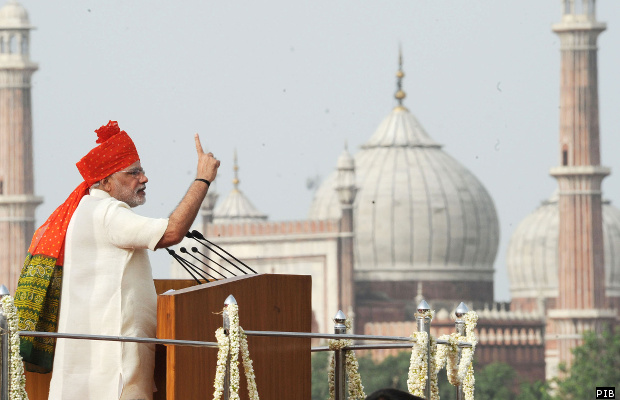 As Prime Minister Narendra Modi delivered his second Independence Day speech, IndiaSpend and FactChecker reviewed the implementation of key pronouncements he made in his first Independence Day Speech on August 15, 2014:

What Modi said: “Brothers and sisters, I have come here with a pledge to launch a scheme on this festival of Freedom. It will be called Pradhanmantri Jan-Dhan Yojana. I wish to connect the poorest citizens of the country with the facility of bank accounts through this yojana. There are millions of families who have mobile phones but no bank accounts. We have to change this scenario. Economic resources of the country should be utilised for the well-being of the poor. The change will commence from this point. This yojana will open the window. Therefore, an account holder under Pradhanmantri Jan-Dhan Yojana will be given a debit card. An insurance of one lakh rupees will be guaranteed with that debit card for each poor family, so that such families are covered with the insurance of one lakh rupees in case of any crisis in their lives.”

What happened: Pradhan Mantri Jan-Dhan Yojana (PMJDY), or the Prime Minister’s People’s Wealth Programme, has indeed opened a window to financial inclusion: allowing the poor access to formal financial services—bank accounts, credit services, debit cards, insurance and pensions. As on August 5, 2015, 174.5 million new bank accounts have been opened; 46% of these had no money—zero-balance accounts. Eventual success will hinge on how subsidy and social-security payments are routed through these accounts, and ensuring the poor actually got access to formal financial services. As IndiaSpend previously reported, the previous United Progressive Alliance (UPA) government opened more than 50 million “no-frills” accounts for the poor over five years, but most were never used. PMJDY has got off to a speedier, more promising start with the PM’s office directly monitoring the programme.

No Of Rupay Debit Cards

Source: Ministry of Finance; Figures in Millions. Disclaimer: Information based on the data as submitted by different banks/state level bankers committees

What Modi said: “We are running so many schemes in the name of the Prime Minister in our country, there are numerous schemes in the name of various leaders. However, today I am going to announce a scheme on behalf of the Members of Parliament (MPs), Saansad Aadarsh Gram Yojana. We shall fix some parameters. I urge Members of Parliament to select any one of the villages having population (sic) of three to five thousand in your constituency. The parameters will be according to the time, space and situation of that locality. It will include the conditions of health, cleanliness, atmosphere, greenery, cordiality etc. On the basis of those parameters, each of our MPs should make one village of his or her constituency a Model Village by 2016. Can't we do at least this? Shouldn't we do this? If we have to build a nation, we should start from the village. Make a Model Village. The reason of fixing this target for 2016 is that it is a new scheme. It takes time to formulate a scheme and then to implement it. After 2016, select two more villages for this purpose, before we go for the general elections in 2019.”

What happened: So far, only 45 Lok Sabha MPs (of 543) and five Rajya Sabha MPs (of 247) have ignored the scheme and not adopted villages. All MPs were to develop one model village in their constituency by 2016 and two more by 2019. The Department of Rural Development is responsible for implementation. As this Mint story reported, there is no change in the UP village that Congress Vice President Rahul Gandhi adopted.

Success or failure will be apparent by 2016, Modi’s deadline to create the model villages he spoke about in 2014.

3. Separate toilets in all government schools—Majority built, according to government, especially for girls, but only a fraction have water

What Modi said: “All schools in the country should have toilets with separate toilets for girls. Only then our daughters will not be compelled to leave schools midway. Our parliamentarians utilising MPLAD (MP Local Area Development) funds are there. I appeal to them to spend it for constructing toilets in schools for a year. The government should utilise its budget on providing toilets. I call upon the corporate sector also to give priority to the provision of toilets in schools with your expenditure under Corporate Social Responsibility. This target should be finished within one year with the help of state governments and on the next 15th August, we should be in a firm position to announce that there is no school in India without separate toilets for boys and girls.”

What happened: As many as 85% of government schools nationwide had toilets for boys and 91% had toilets for girls, according to the Ministry for Human Resource Development. There is no independent verification of this claim.

Source: Lok Sabha, * all-India % completion not given; Note: There were no data specifically on toilets for girls.

4. Ten-year moratorium on communal clashes—Riots continue at largely the same rate as during the tenure of the previous UPA government

What Modi said: “Brothers and sisters, for one reason or the other, we have had communal tensions for ages. This led to the division of the country. Even after Independence, we have had to face the poison of casteism and communalism. How long these evils will continue? Whom does it benefit? We have had enough of fights, many have been killed. Friends, look behind and you will find that nobody has benefited from it. Except casting a slur on Mother India, we have done nothing. Therefore, I appeal to all those people that whether it is the poison of casteism, communalism, regionalism, discrimination on social and economic basis, all these are obstacles in our way forward. Let's resolve for once in our hearts, let's put a moratorium on all such activities for ten years, we shall march ahead to a society which will be free from all such tensions. And you will see that how much strength we get from peace, unity, goodwill and brotherhood. Let's experiment it for once.”

What happened: The average number of riots per month has largely stayed the same over six years, rising marginally this year. The worst year was 2013, and the year with the fewest riots was 2011.

Communal Riots In India: Past 5 Years and January to June 2015

What happened: The Make-in-India initiative was launched in September 2014. There has been a 48% increase in FDI during October 2014 to April 2015 over the equivalent period of the previous year, according to an answer given to the Lok Sabha by the ministry of commerce.

There was a 37% growth in FDI during January to May 2015 over the same period in 2014, according to the Department of Industrial Policy and Promotion. Overall, FDI grew 29% in the financial year 2014-15 over the previous year. Investments by foreign institutional investors, or the money coming through financial markets, were $40.92 billion in the fiscal year ended March 31, 2015, about seven times as much as in 2013-14, The Wall Street Journal reported.

What Modi said: “My brothers and sisters, it is a country of young people. The 65 percent population of the country happens to be under the age of 35 years. Our country has the largest number of youths in the world. Have we ever thought of deriving an advantage out of it? Today, the world needs a skilled workforce. Today, India also needs a skilled workforce. At times, we look for a good driver but he is not available, we look for a plumber, but he is not available. If we need a good cook, he is not available. We have young people, they are unemployed but the kind of young people we seek for are not available. If we have to promote the development of our country then our mission has to be 'skill development' and 'skilled India.”

What happened: With a million jobs needed every month—about the same number are generated in a year—Modi energised the new Ministry for Skill Development and Entrepreneurship and tasked it with providing skills to 2.4 million youth. The flagship, outcome-based Pradhan Mantri Kaushal Vikas Yojana (PMKVY) scheme, the Prime Minister’s Skill Development Scheme, was launched on July 15, 2015. Under this scheme, the government has set a target to provide skill training to 400.2 million people by 2022. Top of Form

IndiaSpend previously reported how the mission does not provide for 263 million agricultural labourers who require re-skilling.