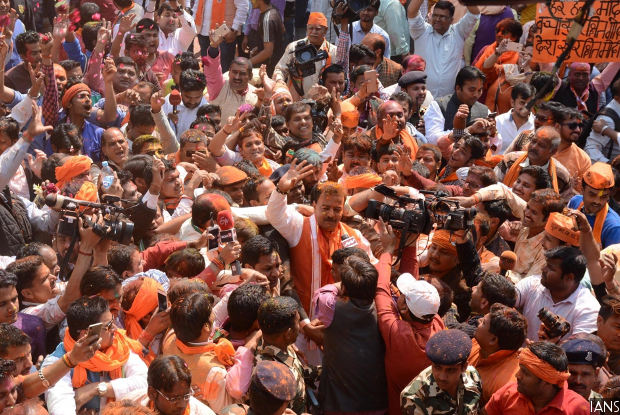 The Bharatiya Janata Party's Uttar Pradesh chief Keshav Prasad Maurya celebrates his party's victory in the state assembly elections. The BJP won an unprecedented victory but, with some of India’s worst development indicators, there is much to do.

The gross domestic product (GDP) of Uttar Pradesh (UP) is comparable to Kenya’s, and its infant mortality rate rivals Mauritania, a poverty-ridden, west-African nation.

The Bharatiya Janata Party (BJP) won an unprecedented victory in UP in the 2017 assembly election, winning 312 out of 403 seats--77.4% of all assembly seats--but with some of India’s worst development indicators, there is much to do.

We analysed six major challenges and the corresponding promises made by the BJP to fix them in its election manifesto, called the ‘Lok Kalyan Sankalp Patra-2017’.

Despite having the largest population, UP spends Rs 452 per capita on health, 70% less than the average spending by states.

There are 84% fewer specialists than needed, 50% fewer nursing staff, and the lowest share of health workers (19.9%) in India, found an analysis by the Observer Research Foundation in February 2017.

What the manifesto said: The BJP, in its manifesto, has promised to have a primary sub centre in all villages with the latest equipment and technology. Further, it promised to set up 25 new medical colleges and specialty hospitals and one hospital at par with the All India Institute of Medical Sciences in every six blocks.

The BJP has promised to turn UP into a malnutrition-free state in five years.

2. Low learning levels, high absenteeism in the state with 21% of India’s child population

UP has achieved high enrolment of children in primary school, with 83.1% of primary school-aged children enrolled in school in 2015-16, according to the data from the government’s Unified District Information System for Education (U-DISE).

Major issues for the new government now include low learning outcomes, high absenteeism, and lower enrolment in grade VI and further--60.5% of upper-primary school-aged students enrolled in school in 2015.

In 2016, about half (49.7%) of grade I students surveyed in households in UP could not read letters, while 44.3% could not recognise numbers up to nine, according to the Annual Status of Education Report (ASER), a citizen-led assessment of learning in rural India, as IndiaSpend reported in February 2016.

The survey also found that a little over half of students (56%) were present in primary school on the days of the survey.

What the manifesto said: The BJP manifesto on education is labelled “improvement in quality of the education sector”. It majorly concentrates on inputs--free education, books, uniforms, teacher-student and classroom-student ratios, along with laptops and free internet for college students, and a Rs 500 crore scholarship fund for poor students.

3. High youth unemployment, high migration to other states for jobs

The low quality of education in the state (and dearth of jobs) is reflected in UP’s high unemployment. In 2015-16, more people per 1,000 were unemployed in UP (58), compared to the Indian average (37). Youth unemployment was especially high, with 148 for every 1,000 people between the ages of 18 and 29 years in UP unemployed, compared to the Indian average of 102, according to 2015-16 labour ministry data.

Source: Ministry of Labour and Employment data here and here

Between 2001 and 2011, over 5.8 million people between the ages of 20 and 29 years migrated from UP in search of jobs, but, for most of these migrants, low educational attainment likely resulted in low-paying jobs in the informal sector.

Voters recognise the lack of jobs as a major issue in the state. As many as 20% of voters surveyed said jobs were the most important issue this election year, according to a FourthLion-IndiaSpend survey.

What the manifesto said: The BJP government will create seven million jobs or opportunities for self-employment in the next five years, its manifesto said. As many as 90% of all jobs in industries in the state will be reserved for youth from UP. The manifesto also promises Rs 1,000 crore for a start-up venture capital fund, which will also create jobs for the youth.

4. Industrial growth one of the slowest in the country

The state is struggling even in industries that have traditionally been strong. For instance, Kanpur’s leather industry is in deep distress with 146 of its 400 leather tanning units shutting down in ten years, IndiaSpend reported in January 2017.

UP ranked 20th out of 21 states on the 2016 State Investment Potential Index, a ranking of states on labour, infrastructure, economic climate, political stability, governance, and perceptions of a good business climate.

The index, released by the National Council for Applied Economic Research, identifies a shortage of electricity and vocationally trained people as the main concern in the state. 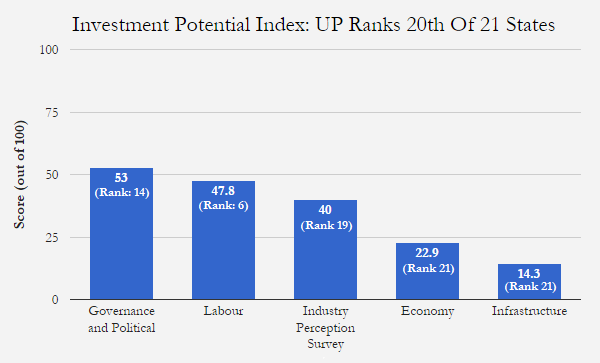 What the manifesto said: The BJP manifesto promises to triple current investment in the state by the creation of an investment board. Further, it calls for a single-window clearance department, headed by the chief minister, for industries. The manifesto also promises to build six information technology parks in the state, a pharmaceutical park, and a dry port connected to a sea port to encourage exports from the state.

For the nine years between 2004-05 and 2012-13, the agriculture and allied sector in UP recorded the slowest compounded annual growth rate of 2.9% (out of all the BIMARU states of Bihar, Madhya Pradesh, Rajasthan and UP), below the national growth rate of 3.7 %.

Outstanding farmer loans in UP stood at nearly Rs 75,000 crore as of two years ago, Business Standard reported on March 15, 2017. Of these, a little more than 10%, or Rs 8,000 crore, was loaned through state cooperative banks or primary agricultural credit societies, which are the only loans that the newly formed government can choose to waive off--the other loans are controlled by scheduled commercial banks. This amount includes loans to all farmers in the state, and not just small and marginal farmers.

What the manifesto said: Under agriculture, the BJP manifesto promises that all agricultural loans will be waived off for small and marginal farmers, while future loans will be provided interest-free. The new government will also create a roadmap to double agricultural income in the state by 2022.

Further, the BJP promised to pay sugarcane farmers in India’s largest sugarcane-producing state within 14 days of the sale, while also coordinating with mill owners and banks to repay previously owed amounts to sugarcane growers within 120 days of forming the new government.

6. More than half the households unelectrified, progress slow with corruption and red tape

In UP, power cuts were the leading election issue for one-third of voters polled, as IndiaSpend reported in February 2017.

UP remains one of India’s most poorly electrified states--with 51.8% of rural households unelectrified--despite having the third largest installed coal capacity in the country at the end of January 2017.

Corruption and red tape within electricity distribution companies, which are responsible for the timely disbursal of funds for electrification projects, are a major factor in the lackadaisical progress of electrification across the state, as IndiaSpend reported in March 2017.

What the manifesto said: Every household in the state will be provided with 24-hour power supply, while poor households (below the official poverty line of Rs 816 per capita per month for rural areas) will be given electricity connections free of cost. Poor households will also be provided the first 100 units of electricity at a discounted rate of Rs 3 per unit.