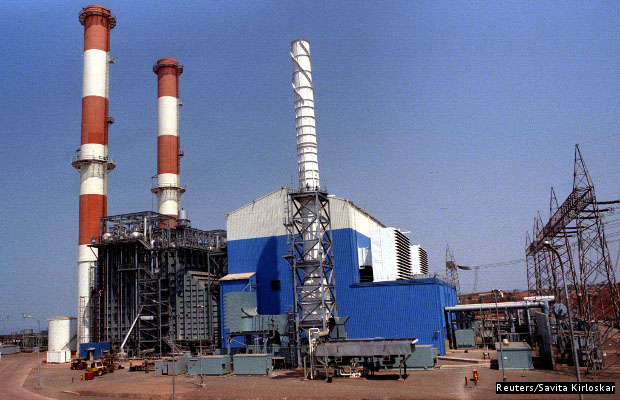 A picture taken in March 1999 of the Dabhol Power Project, 160 km south of Mumbai.

The Dabhol Power Project--once a showcase of foreign investment and state-of-the-art technology--owes Rs 8,500 crore to a group of banks including IDBI Bank, State Bank of India, ICICI Bank and Canara Bank, and has been idle since 2013 on India's Konkan coast, 160 km south of Mumbai.

Over the past two years, the 1,967-megawatt (MW) project has generated no electricity. Not only is the entire investment at risk, the shutdown of the power plant--fired by relatively clean-burning natural gas--starves India of much-needed power, as IndiaSpend had reported.

To use a cliché, this is just the tip of the iceberg.

Including Dabhol, India has 24,000 MW of natural-gas-fired power plants, a tenth of its power generation capacity. Many of these plants are either idle or operating at a fraction of their rated capacity. This means investments worth billions of dollars are at risk.

There is now hope for these stranded assets because prices of petroleum and natural gas have fallen in global markets.

The price of liquefied natural gas (LNG) has fallen 58%, from $18.3 per million British thermal units (mmbtu) in April 2014 to $7.7 per mmbtu in September 2015–mirroring the drop in crude oil prices. As a result, the price of gas-based electricity has also plummeted, making it attractive to some consumers. For instance, there is a proposal to supply electricity from the Dabhol project to Mumbai’s suburban railway system at Rs 5 to 5.5 per unit, starting November 1, 2015.

The gas-power sector is beginning to show improvement. For September 2015, India’s gas-fired power plants operated at 25.4% of their rated capacity, also called the plant load factor (PLF). This may not seem much, considering that coal- and nuclear-fuelled power plants operate at 60% to 80% of capacity.

But it is an improvement from 2014-15, when gas-fired power plants operated at 20% of capacity. This means if they had the capacity to produce 100 units of electricity, they produced 20 units.

Why natural gas is important to India's economy

Most gas-fired power plants were built after 2002, when major natural-gas discoveries were announced in the Krishna-Godavari basin, first by Reliance and later by other companies, including ONGC and Gujarat State Petroleum. It emerged that the projected gas supply was too optimistic, leaving these plants without fuel.

Importing natural gas, shipped in as a liquid--liquefied natural gas or LNG--was too expensive for these plants; electricity generated from imported LNG would have cost upwards of Rs 10 per unit, 200% more expensive than coal-generated electricity, which costs Rs 3.25 per unit (NTPC, financial year 2014-15) and accounts for nearly three-quarters of India’s electricity needs.

A number of power-generation companies, including Lanco, GVK, GMR and Torrent Power, and the banks that loaned them money, floundered. This is a key factor holding down India’s infrastructure sector.

If international gas prices continue to remain low, these investments could be recovered. This could happen, because of some global developments:

To benefit from the trend, India needs to lock-in gas supplies at low prices. This will ensure power plants continue to have cheap fuel in the future.

India, however, will also have to grapple with other related issues, including the financial mess at state electricity boards and the problems of free-power and power-theft.