7 Hit-And-Run Accidents Every Hour. How Witnesses Can Help 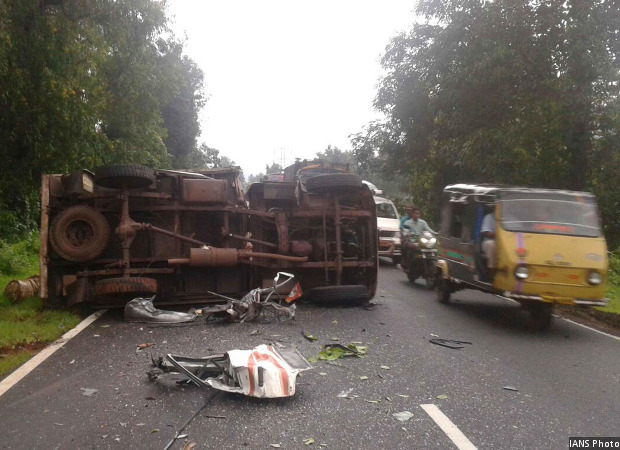 Remains of the vehicles involved in a road accident that happened on Mumbai-Goa highway. Hit-and-run cases accounted for 11.4% of total accidents in 2015, from 10.9% in 2014, according to road transport ministry data.

More than 20,000 people lost their lives in hit-and-run cases nationwide in 2015, according to government data, and the reluctance of witnesses to be involved because of legal entanglements illustrates the need for clear laws to support "good samaritans", as the State describes them.

On January 21, 2016, the government issued standard operating procedures to prevent unjust examination of eyewitnesses to road accidents, India's transport minister said, replying to a question by G. Hari, a member of parliament from Tamil Nadu, in the Lok Sabha (lower house of Parliament) on February 25, 2016.

The standard procedures call for non-coercive, non-discriminatory, and time-bound inquiry into an accident, and the examinee cannot be compelled to disclose personal information.

The guidelines also state that the samaritan does not have to pay for treatment unless she is related to the injured person.

Two-wheelers were involved in more fatal accidents (26%) than other vehicles; those riding two-wheelers accounted for 25.2% of all deaths on the road.

Uttar Pradesh (as on June 23, 2016) became the latest state to make wearing of helmets for pillions mandatory.

Controlled areas (manned by policemen or having machines installed for regulating traffic movement) witness fewer accidents (32% of the total) as compared to uncontrolled environments.

More than 20% of accidents were caused by drivers either on learner’s licence or without licence, suggesting the need for remedial classes for those who cause accidents while on such licences.

As many as 52% of 387 drivers tested to discern a causal link between visual defects and accidents failed in at least one of the vision parameters tested, according to this study by Ashish Varma, Assistant Professor, Transportation Engineering, Indian Institute of Science.

The study also found that 60% of commercial bus drivers failed the minimum vision requirements for driving.

As many as 74% of respondents expressed unwillingness to assist victims of road accidents, according to a study Impediments to Bystander Care in India conducted by SaveLIFE Foundation, an advocacy working for road safety and TNS India, a global marketing research company, in July 2013.

As many as 88% of the unwilling bystanders cited legal hassles, involving repeated police questioning and multiple court appearances, for their hesitation.

Nearly 90% of the study participants wanted the enactment of a law to protect bystanders from harassment in case of administration of help to the victims.

The SaveLife-TNS study also points to another study by the Indian Journal of Surgery published in 2006 where it was found that 80% of road accident victims do not receive any medical care within the first or golden hour after the accident.

The absence of any protective framework is in stark contrast to legislations prevalent throughout the world.

The 201st Law Commission report mentions that doctors say 50% of accident victims could be saved if timely intervention is ensured.

The Sustainable Development Goals (SDGs) formulated by the United Nations on September 25, 2015 aim to halve the global deaths and injuries from road accidents by 2030.

India became a signatory to the Brasilia declaration on November 19, 2015, committing to halve road-accident deaths by 2020.

The road ahead: mitigating measures

The government is also implementing the National Highway Accident Relief Service Scheme (NHARSS) to provide cranes and ambulances for evacuation purposes. As many as 140 advanced life support ambulances have been handed over to 140 identified state government hospitals.

(Sharma was a Legislative Assistant to Member of Parliament (LAMP) fellow for the year 2015-16, assisting a senior Parliamentarian from the Rajya Sabha on policy matters.)