55% Rise In Funds To States, But They Aren't Ready 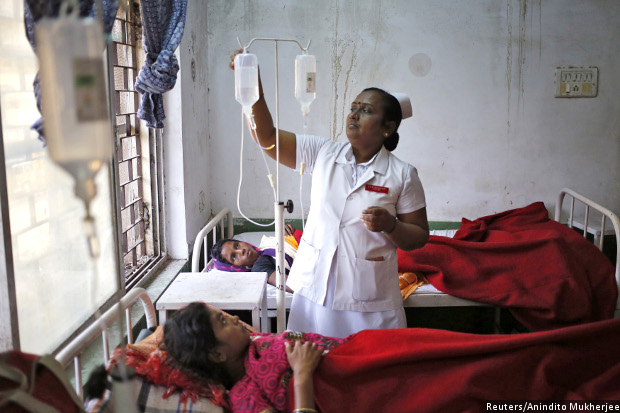 Tax money transferred without conditions from Delhi to India's states rose 55% in 2015-16--breaking a 68-year tradition of Central control--but from early indications, states were unprepared for this Rs 5.24 lakh crore ($ 831.7 billion) bonanza, a new paper has said.

The flood of money is a result of "devolution"--a recommendation made in December 2014 and implemented in last year's budget--the process of handing fiscal responsibilities to states. This money was previously spent by states on "centrally sponsored schemes" with a list of conditions.

This unconditional transfer of money generated from taxes--"untied funds" in official jargon--led to a 19% cut in Central funding of social-sector programmes under plan budget in, mainly, education, farm, and maternal and child health. Devolution was a promise made by Prime Minister Narendra Modi's government, as IndiaSpend reported last year. There were warnings, such as this one, that spending increases by states would be "modest".

It now appears clear that the warnings were premature, in terms of cutbacks. However, many states are just not ready to handle the money, and some of the poorest states appear to be worst affected by the withdrawal of Central funding of health programmes.

“Despite increases in untied funds, states are yet to demonstrate any serious attempt to restructure their budgets in a way that reflects their new found autonomy to alter investment patterns," concludes a recent paper, State of Social Sector Expenditure in FY 2015-16, by the Accountability Initiative, a think tank. "Is the 14th FC (14th Financial Commission, which recommended the devolution) a tectonic change or a lost opportunity? Only time will tell.”

It will take until 2016-17 to properly analyse how states handled the Rs 5.24 lakh crore. Some states had already passed their budgets before the Centre accepted devolution, while others did not provide enough money for centrally sponsored schemes because changed spend-sharing guidelines were issued later.

A 55% rise in unconditional transfers to states, many states benefitted

"Untied" transfers rose 55%, from Rs.3.38 lakh crore in 2014-15 to Rs. 5.24 lakh crore as tax devolution in 2015-16, according to the budget's revised estimates (RE), released around October-November 2015. The budget is prepared using income estimates, typically revised after six months to account for actual tax received.

The highest increases were in Chhattisgarh, Jharkhand and Maharashtra, all of which increased social-sector expenditure by more than 25% according to the budget estimates (BE) analysed by Accountability Initiative. But not all states have seen increased spending.

Why have many states witnessed a decline in social-sector funding?

While overall expenditure by states on social sectors has risen, when analysed as a percentage of total expenditure, many states witnessed a decline, according to Accountability Initiative.

Despite increases in untied funds, a significant portion of expenditure in the social sector continues to be through centrally sponsored schemes (CSS), in part because fund-sharing has changed for 17 core schemes--of 30 CSS, including the Swachh Bharat mission, National Health Mission (NHM) and the Integrated Child Development Scheme (ICDS).

Previously, the Union Government shouldered expenses on social welfare through the CSS and provided more than 75% of the money. Delhi's share is now down to 60%.

States allocate money for the CSS from the pool of untied resources provided by the Union government. Social-sector spending by the union government has been ring-fenced.

However, compared with 2014-15 revised estimates (RE), most states, with the exception of Telangana (-20%), Uttarakhand (-14%), Karnataka (-3%) and Maharashtra (-3%), received about the same or significantly more money from the Union, despite cuts in the CSS. As we said earlier, it is too early for a full analysis.

“Although the country is close to completing its first budget cycle since the implementation of the 14th FC recommendations, any rigorous assessment of the real impact of these recommendations is difficult owing to large gaps in available data,” said the Accountability Initiative study.

Further, five states--UP, MP, Jharkhand, West Bengal and Odisha (the northeastern states were excluded from the analysis)--had not restructured their budgets in line with the new transfer system.

The effect of the changed transfers from Centre on the revenues of these five states cannot be estimated until the new budget year begins and once 2015-16 revised estimates (RE) are available. These states were also excluded from the analysis.