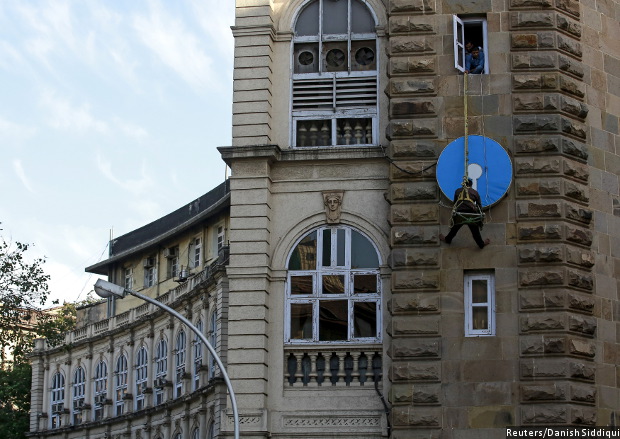 An electrician puts lights on the logo of State Bank of India at its main branch in Mumbai, India. The money that wilful defaulters owe Indian banks has grown nine-fold over 13 years.

Bangalore: Liquor baron Vijay Mallya (60) and his Rs 7,000-crore default occupy headlines, but there are 5,275 other “wilful defaulters”—together, they owe India’s banks Rs 56,521 crore ($8.56 billion), according to the Credit Information Bureau (India) Ltd, or CIBIL, a company set up by banks to collect defaulter information.

The money that wilful defaulters owe Indian banks has grown nine-fold over 13 years, and is more than 1.5 times the central government’s allocation for agriculture and farmer welfare (Rs 35,984 crore) in Union Budget 2016-17, according to an IndiaSpend analysis of CIBIL data.

Banks declare borrowers to be “wilful defaulters” when they deliberately do not repay loans, despite the ability to do so. Many defaults may not be wilful, caused as they may be by adverse economic conditions. Mallya’s now-defunct Kingfisher Airlines is fourth on CIBIL’s list—available with IndiaSpend—of wilful defaulters.

Except Winsome Diamonds & Jewellery Ltd, the other companies are in various stages of liquidation, according to the Ministry of Corporate Affairs website. E-mails sent last week to Winsome Diamonds and Kingfisher Airlines went unanswered, as did emails to two prominent banks that loaned them money—State Bank of India (SBI) and Punjab National Bank (PNB). SBI accounts for 32% of dues owed by wilful defaulters.

Maharashtra has more wilful defaulters than any other state: 1,138, who owe Rs 21,647 crore. Next is West Bengal with 710 and Andhra Pradesh with 567 cases. But in terms of defaults, Delhi is second with more than Rs 7,299 crore.

As many as 19 nationalised banks record 4,738 wilful defaulters who owe them more than Rs 26,600 crore. Of these, the SBI and its associates record 1,546 wilful defaulters, who owe Rs 47,350 crore. Wilful defaulters of public-sector banks overshadow those with private and foreign banks.

THE JAMMU AND KASHMIR BANK LIMITED

SBI AND ITS ASSOCIATE BANKS

Speaking on condition of anonymity, a senior executive manager of a Singapore-based bank said: “Often, banks do not even report unpaid loans to CIBIL due to a nexus between politician and defaulter. Kingfisher is on the list, because Mallya’s cover has been blown. This is the reason corporate get easy loans from government banks and not private and foreign banks.”

Private-sector banks also have an unpaid-loan problem, but their bad loans are less than half the level of public-sector banks, which account for 73% of all lending, as IndiaSpend reported last month.

Diamonds in Dubai, land in US, cricket team—what defaulters did with their loans

India’s wilful defaulters have a history of using loans from public banks for a variety of purposes--some unrelated to their businesses, others used for expansion without business diligence.

Among the wilful defaulters is English daily Deccan Chronicle, which survives despite a string of unpaid loans—used for other businesses, including a cricket team—and Mumbai-based JB Diamonds, the target of income-tax raids after a 2010 Rs 800-crore default.

Jatin Mehta—promoter of India’s largest wilful defaulters, Winsome Diamonds and associate Forever Precious—was accused in forensic audits (quoted here in the Indian Express) of “wrongly attempting to distance himself” from business partners who did not pay dues, in particular a Jordanian in Dubai, but had been chosen by Mehta himself.

Vijay Choudhury, the promoter of Zoom Developers, which owes money to a consortium of 26 public-sector banks led by PNB, bought land valued at Rs 1,000 crore in the US using loan money, according to the Enforcement Directorate, which ordered the land attached. "The accused have knowingly formed various trust and beneficiary companies and projected them as independent entities concealing the relationship between the trust and the foreign companies...", said the attachment order, quoted in India Today.

With Mallya's Kingfisher Airlines, SBI alleged that money loaned was diverted several times to various companies of Mallya’s United Breweries (UB) group. Mallya and his company (UB Group) are contesting SBI’s charges, and the case is currently with the Bombay High Court.

Various cases are underway against wilful defaulters in debt recovery tribunals nationwide. There are many more who have escaped legal action.

This CIBIL list contains data on wilful defaulters—who owe Rs 25 lakh and more and against whom suits were filed—provided by 50 of about 90 Indian banks, as on December 31, 2015. The list of defaulters held by three other CICs is here: Equifax, Experian and CRIF.

The full list of wilful defaulters is with the Reserve Bank of India (RBI), which does not disclose names. Last month, the Supreme Court asked the RBI for a list of defaulters who own more than Rs 500 crore to banks.

The RBI list contains the names of those against whom loan-recovery suits have been filed, as well as those free of legal action. As many as 7,265 borrowers (who borrowed more than Rs 25 lakh) owed Rs 64,434 crore to public-sector banks as on September 30, 2015, according to this statement in the Lok Sabha, the lower house of parliament. Of these, first-information reports—the first legal step--have been filed in only 1,624 cases.

Suit-filed Accounts Of Rs 1 crore & Above

THE JAMMU AND KASHMIR BANK LIMITED

SBI AND ITS ASSOCIATE BANKS

If the unpaid loans made by India’s public-sector banks were recovered, they would be enough to pay for India’s 2015 spending on defence, education, highways, and health, as IndiaSpend reported last month. These bad loans, or gross non-performing assets (NPAs) as they are called in banking parlance, of public-sector banks have crossed Rs 4.04 lakh crore ($59 billion), a rise of 450% since March 2011.

Mallya's Kingfisher is now the public face of a long-festering problem, but even that has been evident to those in banking circles.

After Kingfisher, the cleanup begins

With the spike in loan write-offs and NPAs and a fall in profits spooking the banking sector, RBI governor Raghuram Rajan has made it clear that banks “may require deep surgery” to clean up their balance sheets and put stressed projects back on track.

One suggestion to tighten things comes from lawyer Dutta, who said the Securitisation and Reconstruction of Financial Assets and Enforcement of Security Interest Act, 2002, needed amendment. "Currently we can’t initiate criminal proceedings against the defaulters as the act is civil in nature,” he said.

Who is a wilful defaulter?

The Reserve Bank of India defines a "wilful default" under these circumstances: