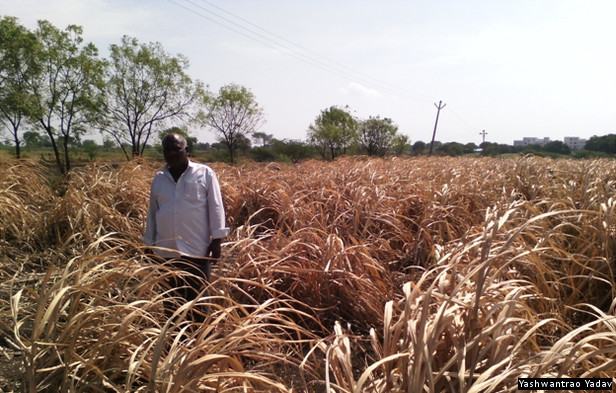 With 32 suicides reported in one week across Maharashtra's south-central region of Marathwada, a deepening drought—worse than the last one of this intensity 43 years ago, say farmers—has taken hold of all but one region of the state.

Marathwada and Western Maharashtra regions have had rainfall about half the normal average, according to government data, and people from drought-hit regions, which includes the North, have been migrating to the state's cities, such as Aurangabad, Pune and Mumbai.

If rainfall is less than 50% of normal, an area is considered to be facing a drought. Next week, up to 14,000 villages in north, western Maharashtra and eight Marathwada districts (Aurangabad, Nanded, Latur, Jalna, Beed, Parbhani, Osmanabad, and Hingoli) are likely to be declared drought affected.

Marathwada comprises territories that were once part of Hyderabad state and were ruled by the Nizam. Home to about 19 million people—about 80% living in rural Marathwada—the region occupies a fifth of Maharashtra’s area and is larger than Punjab, Kerala or Uttaranchal.

A severe drinking-water crisis is also underway in the Marathwada districts of Osmanabad, Latur and Beed and parts of Ahmednagar, Sholapur and Sangli in central Maharasthra.

Marathwada In The Monsoons

Departure from normal rainfall in %

The rain deficit has been so severe that there has been no kharif (summer-monsoon) sowing at all in the majority districts of Western Maharashtra and Marathwada.

In general, the rains have been insufficient in Marathwada since 2012, except 2013 when the rainfall was normal.

Across Marathwada, dead fields and despair

Sown crops have withered due to the long dry spell in August, according to farmers.

Farmers in the region have no hopes from the rabi (winter) crop—including sugarcane, soybean, cotton and pulses—because of the longer-term effect of this season’s scanty rainfall. 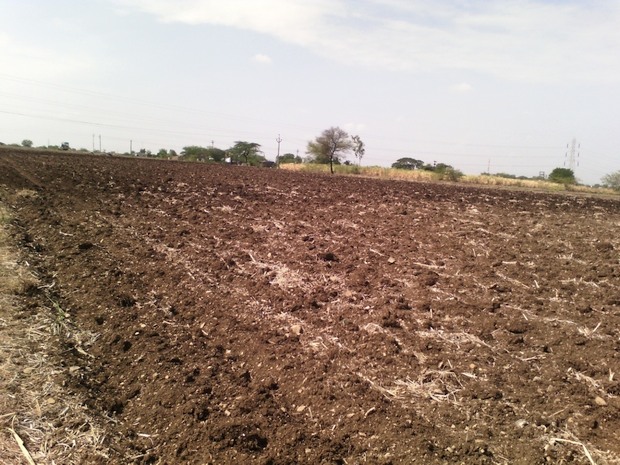 As this fallow field shows, there has been no kharif (summer-monsoon) sowing in major parts of western Maharashtra and Marathwada.

Currently, sugarcane farms in the south-eastern district of Sholapur’s Pandharpur taluka (a subdivision) are withering and drying—and this in an irrigated area. No more than 18% of Maharashtra's farmland is irrigated. In 2012-13, about 1.1 million hectares of irrigation potential was created in Marathwada (Aurangabad Division), and only 14% was utilised, according to the Economic Survey of the state of Maharashtra.

Bharat Sadashiv Dhotre, a sugarcane farmer in Pandharpur’s Korti village said there was no water in his well, tubewell or the nearby canal. His sugarcane field is dry. He cannot sow seeds or provide for his livestock and there is no drinking water.

“The Government has started supplying tankers for drinking water in my village, but they give only one barrel (approx 200 litres) per family,” said Dhotre. “The state government should immediately start animal camps or fodder depot for our livestock.” 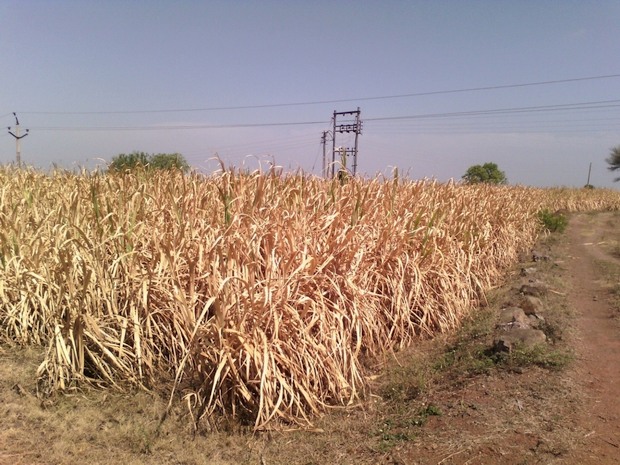 “We are hard-working people but what can we do to face the drought?” asked Sandipan Sudam Gavhane of Dhavalas village, Sholapur. “If this is the situation in September, there will be severe drinking-water problems the next summer season.”

Gavhane also grows onions, and with those prices soaring, he generated enough money to sink a borewell, striking water at 600 feet on August 8, 2015. The tubewell ran dry within 20 minutes.

To the south-east in Nanded district, soybean and cotton farmer Bhanudas Kadam told IndiaSpend last week that if rains don’t fall in the next four days, their crops—now soybean pods and cotton bolls—would die.

Pomegranate orchards are also dying because of high temperatures and dry soil. 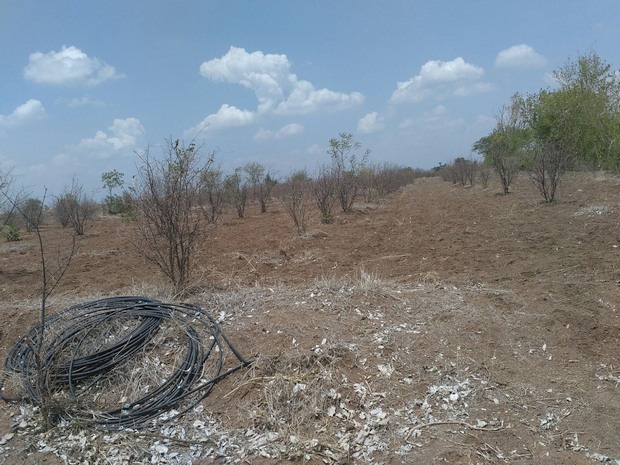 A dying pomegranate orchard near Bhahdishegaon village in the south-eastern district of Sholapur.

Pomegranate is a major fruit crop in Sholapur. In Anawali village, Pravin Pai, an agricultural sciences graduate, said he had no water to save his two acres of pomegranate orchards and a one-acre vineyard.

“I have taken a crop loan of Rs 1,60,000 from the bank,” said Pai. “Now, I am worried about repayment.” Next year, Pai wants to build a village pond that will tide the area over in the event of another drought.

The Maharashtra government has launched the Jalyukt Shivar Abhiyan (integrated water conservation and management initiative), which aims to make 5,000 villages scarcity-free in the first phase in 2015-16.

The government hopes the programme—which includes the construction of a series of check dams and repair of old weirs and storage dams—will make Maharashtra a drought-free state by 2019.

But Maharashtra’s experiences with irrigation has not been promising, with the state’s irrigation potential—the area that can theoretically, or potentially, be irrigated with new facilities—increasing by no more than 0.1% despite spending Rs 70,000 crore, roughly since the turn of the century, as this Business Standard report noted, quoting the state’s own economic survey.

The government is also planning to start animal camps and fodder depots in the drought-prone districts of Marathwada and Western Maharashtra. The state agriculture department is encouraging farmers to produce animal fodder through hydroponics, growing plants in a nutrient-rich solution instead of soil.

A long-term solution that many experts recommend is to change the state’s cropping patterns, such as growing water-hungry sugarcane in rain-deficient areas, such as western Maharashtra.

“We have to change the cropping pattern of farmers who do not have assured water sources or irrigation facilities,” said Dr. Sadanand Tambe, an agronomist from Pandharpur Agricultural Research Centre of Mahatma Phule Krishi Vidhyapith (Mahatma Phule Agricultural University), Rahuri, in district Ahmednagar.

“They should not plant sugarcane crop as it requires more water. We have to shift to xerophytes-crops (which require lesser water) crops like ber (chinee apple), pomegranate, amla (gooseberry), custard apple, guar (cluster bean) and castor.”